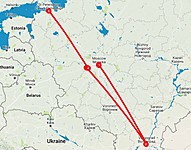 This tour takes you back to World War II, or what Russians call the Great Patriotic War of 1941 -1945. You will visit the battlefields of Borodino, which saw action in 1812 and 1941; Stalingrad, the high-water mark of Hitler's invasion and the site of his first major defeat in early 1943; and Leningrad, present-day St. Petersburg, which experienced one of history's worst sieges. History enthusiasts will love seeing where the action happened.

Upon arrival to Moscow, transfer to your hotel. Depending on your time of arrival you can either rest, or choose to do some preliminary exploring of Moscow.

Begin your tour of Moscow by visiting the Kremlin, that powerhouse where Stalin lived and worked. After exiting via the Spassky Gate, tour Red Square and St. Basil’s Cathedral. The latter was built by Ivan the Terrible as a model of the heavenly Jerusalem brought to the frozen north, in celebration of his victory over the Tartar city of Kazan in 1552. Stalin wanted to tear it down to make way for military parades, but was talked out of it. Some say he had a superstitious fear of Ivan; he certainly was one of Stalin’s favorite leaders, that much is certain.

After lunch, visit sites associated with the war and Stalin. Drive by the Ministry of Defence near the Kremlin, see the Church of Christ the Savior, which was blown up by Stalin and rebuilt by Yeltsin, and see the House of Columns, where the infamous show trials took place in the 1930s. You’ll walk around the neighborhood of Lubyanka, home to the NKVD, Stalin’s feared Interior Ministry, and also see the old Central Committee Building, where Stalin and Molotov had their first offices.

After dinner, finish the day with a tour of the Moscow Metro. Pay special attention to Ploschad Revolutsii (Revolution Square), Mayakovskaya (where Stalin gave his famous 1941 Revolution Day speech), and Chistie Prudi (Clean Ponds). The latter served as the Air Defence headquarters during the German attack in 1941, and is where Stalin spent several nights, directing the defense and taking shelter at the same time.

Start the day with a visit to the superb Museum of the Great Patriotic War. It is impossible to understand modern Russian without understanding the horrific experience it suffered fighting and defeating Hitler. Victory was won at a cost of around 25 million lives, and the memory of the war remains front and center in the hearts and minds of Russians to this day.

After, head over to the Central Armed Forces Museum, which has some superb displays on the war, including the giant eagle that once stood over the entrance to Hitler’s New Reich’s Chancellery Building. The museum also contains some great displays on the Russian Civil War and the Russian Empire’s First World War.

After lunch you'll have free time to explore the city.

After an early breakfast you'll be taken to Sheremetyevo Airport to catch a flight to Volgograd (the former Stalingrad).

After arriving in Volgograd and checking into your hotel, take a tour focusing on the Battle of Stalingrad. See Pavlov’s House, the Mamaev Kurgan, the Central Train Station, and the factories to the north of the city where the most intense fighting took place.

Behind the Barrikady Works you’ll see Ludnikov’s Island, centered on a torn up house where a small group of Soviet soldiers conducted an heroic defense of the last few meters of shoreline before the Volga River. You’ll also visit the Grain Elevator and the Panoramic Museum, where you can see the legendary sniper Vasily Zaitsev’s rifle.

Day 5: The Battle of Stalingrad Tour

As well as the city center, Stalingrad saw extensive fighting in the desolate steppe outside the city. Today you’ll visit some of the fields where the heaviest fighting took place, from the Pitomnik Airfield to the gullies and ditches where barely believable stories played out.

After dinner you'll be taken to the airport to catch a late-evening flight back to Moscow.

Today you'll drive south of Moscow around 80 miles (130 km) to see the Borodino Battlefield (a two-hour drive). This is the site of Napoleon’s famous battle in 1812, where the Russian army fought the Corsican to a standstill, and inflicted unheard-of casualties on the French. Borodino also saw heavy combat in 1941, as the Germans drove on Moscow. Look out for the monuments erected in 1912, during the centenary celebrations, pockmarked with shell and bullet holes. You will also see 1941 strongholds and bunkers among the remains of the 1812 fighting. Truly a field haunted with history.

The Battle of Moscow was, both in terms of area covered and number of people involved, one of the largest battles in human history. Put away any ideas of visiting this battlefield as if it were Gettysburg or Waterloo. There’s a lot of driving today, and the battle raged all around the areas you’ll be going to. The area of operations was around 370 miles (600 km) long, and the fighting involved around 3.5 million men, of whom over a million fell as casualties.

After lunch you'll drive to Mozhaysk (two hours), which played a role in Napoleon’s attack on Russia, as well as Hitler’s in 1941. As well as the attractive late-medieval churches, a great thing about visiting this city is seeing what life is like in a typical town outside the major urban centers.

Today you'll take an early-morning train to St. Petersburg (3.5 hours). After arriving and checking into your hotel, take a general tour of the city, with an emphasis on the war. Visit sites such as Smolny, from where the defense was directed, the Field of Mars and the Putilov Factory, one of the Soviet Union’s largest industrial centers. This was a hotbed of revolution activity in 1917, and a stronghold in the defense of the city in 1941.

Day 8: The Siege of Leningrad Museum and Schlisselburg Fortress

The Siege of Leningrad Museum showcases the horror of what St. Petersburg residents still call “the 900 days". After an educational tour, drive to Schlisselburg Fortress (one hour), which saw extensive action during the Siege and Blockade. Its ruins are evocative, made more so by the fact that few people visit the place.

After lunch you will visit the Nevski Pyatachok and the local museum. The Nevski Pyatachok is one of most bloodstained pieces of real estate anywhere on earth: an estimated 260,000 Soviets fell trying to secure this tiny bridgehead to break the blockage of Leningrad. The still-scarred landscape has the power to shock, many decades later.

Today you can either explore the city on your own or visit the Hermitage. This is one of the world’s greatest art museums, housed partly in the old Winter Palace, the St. Petersburg home of the tsars. The museum is as much of an attraction as the art on display inside.

After breakfast you will be taken to Pulkovo Airport to catch your flight back home. Safe travels!

Discover Russia's two capital cities on this trip to Moscow and St...

This 10-day tour takes you through Russia's two capitals, as well as to...

Explore the capitals of Russia on this 10-day tour, starting in Moscow...
Russia 10-Day Tours & Itineraries