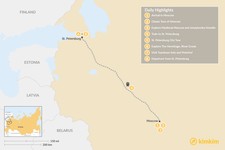 Moscow and St. Petersburg may be Russia's twin capitals, but each has a distinct spirit of its own. This tour helps you discover both cities by exploring beyond the highlights to hidden local gems. Whether this is your first time in Russia or a repeat visit, you’ll be sure to find something new and exciting on this tour.

Transfer from the airport to your hotel to relax after the flight.

Have a walk around and explore the local neighborhood, enjoy coffee in an atmospheric cafe, have dinner in a local restaurant, feel the buzz of the Russian capital and get ready for your adventure.

Day 2: Classic Tour of Moscow, Red Square, and The Kremlin

As a newly minted Muscovite, it’s only proper that you get to know your city! We start our day with a general tour of Moscow, taking in some of its best-known streets and sites along the way. You’ll have a chance to see the so-called Stalin Sisters, which were built to compete with New York’s skyscrapers. You’ll take in the Triumphal Arch and the Church of Christ the Savior before heading to New Maidens Convent, Sparrow Hills, Moscow State University, and Luzhniki stadium. You’ll have time to explore some of these sites and you'll have plenty of time for photo stops at all of them. This is all just scraping the surface of this beautiful and always intriguing city. Prepare to be surprised and beguiled by Moscow.

After lunch, it's time for the blockbuster sites of Red Square, St Basil’s and the classic view of the Kremlin from across the river. This morning features one of your trip’s highlights, a tour of the Kremlin. That icon of power, beauty, and majesty. It’s an unforgettable visit to one of the world’s very few medieval fortresses still functioning in its original intended purpose as a center of government, a seat of religious authority, a military base and not to mention an expression of raw power. After lunch, you'll have the afternoon to continue exploring on your own.

After a long day, stop at Vatrushka Restaurant (5 B.Nikitskaya St) which is situated close to Lenin Library not far from the Kremlin and offers traditional Russian menu. The breakfast menu is available here from 8 am to midnight, and on weekends they make wonderful caster sugar doughnuts.

So far, you’ve seen the big sites. While the Kremlin, St Basils and the New Maiden’s Convent are must-sees, the spirit of medieval Moscow can still be found in unknown places that few tourists know of. So, let’s begin.

We start with a visit to the last remaining sections of the Kitai Gorod wall, with a discussion of Moscow’s military defenses and how the largest city in Europe was defended. Then we’ll head through the streets of Kitai Gorod, the heart of the oldest part of Moscow, although, most of what you see today was built in the 18th – 20th centuries. Next, we’ll stop by the Romanov Boyar house and the Old English Embassy. We then head out to the Krutitskoye Podvorye, a secluded part of Moscow where time seems to have stopped at the 17th century.

After lunch, it's time to visit the Izmaylovsky Kremlin and Market. Generally, “Kremlin” is a Russian word meaning fortification. But it’s not the case with the Izmailovsky Kremlin. It was built as a cultural and entertainment complex in 2007, modeled on Russian architecture of the 18th century. Among other sites, you can see the Church of St. Nicholas, the tallest wooden church in Russia (46 m/151 ft in height); museums, cafes, and souvenir shops.

In the market, you can buy souvenirs and handicrafts from different Russian regions. This is a good place to buy Khokloma, Gzhel, Palekh which are all traditional handicrafts. You can also pick up an “ushanka,” the famous Soviet ear hat. The antique market is a great place to pick up Soviet souvenirs, ranging from the authentic to the kitschy. The Izmailovsky Kremlin houses several museums including the popular Vodka Museum, the Museum of Folk Arts and the unique museum of Bread.

After an early breakfast, take a Sapsan express train to St. Petersburg (around 4 hrs). Upon arrival and check in at your hotel, it's time to get acquainted with Russia’s magnificent, history-haunted, and stunningly beautiful Northern Capital.

Today, St. Petersburg is yours to explore however you choose!

Here are some suggestions to help you make the most of it:

1) The Hermitage is one of the world’s greatest art museums. Housed partly in the old Winter Palace, this is a museum where the building is as much the star exhibit as the art on display.

2) St Isaac's Cathedral is arguably the most iconic church in St Pete. Looming over the city since the 1850's, it is the largest Orthodox cathedral in the world and its interior beauty is matched by its well-balanced Neo-Classical exterior.

3) Kazan Cathedral is modeled loosely on St Peter's in the Vatican. It is essentially the home church of the Russian armed forces and once displayed objects captured from Napoleon.

4) Church of The Savior on Spilt Blood was constructed on the spot where assassins murdered Tsar Alexander II in 1881. The church, although over a century old, looks like it belongs in Moscow and evokes the old world of onion domes and traditional orthodoxy. Witnessing the contrast between these two landmarks, St Isaac and The Church of the Savior, makes for great travel memories.

You’ll find the mood here very different from Moscow. St Petersburg is Russia’s so-called Window to the West, the Venice of the North. It represents Russia’s European side, with art and architecture inspired by Classical motifs far more than traditional Russian ones. Yet St Petersburg is, in its very “otherness,” a paradoxically Russian city. Home of the Emperors, the cradle of the 1917 Revolution, the City of the Siege, and the hometown of Putin, St Petersburg is embarrassed by the richness of the stories it has to tell. Your general tour of St Petersburg includes the highlights: Senate Square, St Isaac Square and Palace Square, Nevski Prospekt, and the Smolny Institute.

After lunch, you'll visit St Petersburg's original citadel. Still standing guard over the city just as it has done since 1706. Indeed, the city was essentially born here and is incomparably represented in all its highs and lows. From beautiful architecture to the burials vaults of the Emperors, feared prison to bastion of revolution, the fortress has seen it all. You'll discover these highlights and others as you explore this thrilling monument.

Day 6: The Hermitage and River Cruise

In the morning, visit the Hermitage, which is one of the world’s greatest art museums. Housed partly in the old Winter Palace, this is a museum where the building is as much the star exhibit as the art on display.

A city built on 42 islands, St. Petersburg is surrounded by water and interlaced with a complex web of rivers, canals, and channels. After lunch, you'll take a river cruise to experience it for yourself. The city's classical architecture is low-rise, which means that you'll get great views from the water.  A river cruise is an essential St Pete experience.

In the evening, enjoy dinner at a Georgian restaurant Mamalyga (2 Kazanskaya Ulitsa), right behind the Kazan Cathedral. Georgian cuisine is delicious and is omnipresent in Russia. Georgian food is to Russia what Mexican food is to the USA. You simply can’t visit Russia without trying it at least once.

Tsarskoye Selo (Tsar’s Village) was so called because many of the tsar’s palaces were located here, outside the former capital city of St. Petersburg. You’ll visit the stunning 18th century Catherine Palace and Park with the famous Amber Room and later visit the atmospheric and more intimate Alexander Palace, home to Nicholas II and his family. Nicholas was the last tsar and something of his tragic story still seems to haunt the air of this much less visited palace. Although the Alexander Palace is currently closed for restoration and is promised to be open in 2018, we will see it from outside.

After lunch we drive to one of St. Petersburg's most famous and popular visitor attractions, the palace and park at Peterhof (also known as Petrodvorets) are often referred to as "the Russian Versailles", although many visitors conclude that the comparison does a disservice to the grandeur and scope of this majestic estate. Versailles was, however, the inspiration for Peter the Great's desire to build an imperial palace in the suburbs of his new city and, Peterhof - which means "Peter's Court" in German - became the site for the Tsar's Monplaisir Palace, and then of the original Grand Palace. The estate was equally popular with Peter's daughter, Empress Elizabeth, who ordered the expansion of the Grand Palace and greatly extended the park and the famous system of fountains, including the truly spectacular Grand Cascade. The palace-ensemble is recognized as a UNESCO World Heritage Site.

It's time to say farewell to Russia for now! After breakfast, you will be taken to Pulkovo Airport to catch your flight home.

Plan your trip to Russia

Plan your trip to Russia

Moscow and St. Petersburg may be Russia's twin capitals, but each has a...

This five-day tour of Russia’s two capitals will give you a taste of two...

Explore some of the most exciting cities of the Baltic and Russia....

Patricia S.
Missouri, United States
"Sean & his wife Ulyana Eastern Europe Explorer were absolutely brilliant! I gave Sean what I thought was an impossible dream at last moment & he turned it in..." read more
Traveled to Russia as a couple in June, 2018
Create your custom-made trip to Russia
Get Started