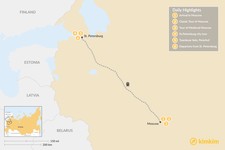 Day 2: Classic Tour of Moscow, Red Square, and The Kremlin

After breaking for lunch, head to the city center for a visit to the Red Square, the onion-domed St. Basil's Cathedral, and a chance to see the Kremlin—the home of the Russian government—up close. This medieval fortress is one of the few in the world still functioning in its original intended purpose as a government and military center.  In the afternoon, join a tour to see inside the Kremlin walls or explore on your own. Stop inside the GUM—the government department store—located opposite the Kremlin to see a Soviet-era shopping center.

Spend the morning exploring the older parts of Moscow. Start with a visit to the remaining sections of the Kitai Gorod wall and learn about how the largest city in Europe defended itself against invasions. From here you can walk the medieval sections of Moscow, although many of the buildings you see were built in the 18th-20th centuries. Stop by the Romanov Boyar house to see a museum devoted to the Russian nobility's lifestyle during the 16th-17th centuries. From here head out to the 17th-century Krutitskoye Podvorye, a restored Orthodox estate and personal metochion of the church leadership.

Your tour of the city today will include iconic highlights—from the Kazan Cathedral to the Academy of Sciences—as well as numerous cathedrals, notable buildings, and the expansive Nevsky Prospekt. Break for lunch at one of the city's many cafes and restaurants, then continue to the Hermitage, one of the world's greatest art museums. This massive collection is housed partially in the old Winter Palace, the St. Petersburg home of the tsars. Enjoy the interior of the museum—the architecture is as much on display here as the art itself.

Spend today touring the countryside estates and palaces favored by the Tsars during the 18th-20th centuries. Start at Tsarskoye Selo—The Tsar Village— so called because of the many palaces that are located there. Visit the stunning 18th-century Rococo style Catherine Palace and the ornate Amber Room.