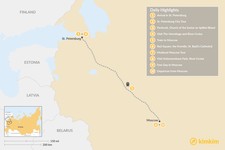 History enthusiasts will love the chance to experience Russia's two greatest cities through places associated with the ill-fated Romanov dynasty. Beginning with Peter the Great's eponymous city, you'll uncover more than two centuries of history while getting to know the modern side of this classical city. Continue to Moscow, where you'll visit the big-ticket attractions as well as lesser-known spots around the Kitai Gorod neighborhood.

Welcome to St. Petersburg! Transfer from the airport to your hotel to relax after your flight. After settling in, head out to get a first look at Russia's northern capital, or rest at your hotel.

Today, you'll set out on a St. Petersburg city tour. St. Petersburg represents Russia’s European side, with art and architecture inspired by classical motifs far more than traditional Russian ones. Yet, is also a paradoxically Russian city. Home of the Tsars, cradle of the 1917 Revolution, the city of the Siege, and the hometown of Putin, St. Petersburg has many stories to tell. On this morning's tour, see Senate Square, St. Isaac's Square, Palace Square, Nevski Prospekt, and the Smolny Institute, as well as several sites associated with the Romanovs.

After lunch, visit St. Petersburg's original citadel, the Peter and Paul Fortress, still standing guard over the city as it has since 1706. The city was essentially born here. From beautiful architecture to the burial vaults of the Tsars, feared prison to bastion of revolution, the fortress has seen it all.

Continue to the wooden Cabin of Peter the Great. This is a small wooden house that was the first St. Petersburg "palace" of Tsar Peter the Great. The log cabin was constructed in three days in May 1703 by soldiers of the Semyonovskiy Regiment. The date of its construction is now considered the foundation day of the city. The design combines elements of an izba, a traditional Russian country house typical of the 17th century, and the Tsar's beloved Dutch Baroque style, a style that later evolved into Petrine Baroque.

Continue exploring the sights and attractions of St. Petersburg today, beginning at the Palace of Paul I in Pavlovsk and continuing to one of the city's most distinctive churches, the Church of the Savior on Spilled Blood. This Russian-style church was built on the spot where Tsar Alexander II was murdered in 1881. Visitors are impressed by its otherworldly opulence, and its sparkling mosaic interiors.

Next up is the Yusupov Palace. Completed in 1770, the Yusupov Palace was the St. Petersburg residence of the great Yusupov family, once one of Russia's great aristocratic families. A tour of the palace helps you imagine what life was like among Imperial Russia's rich and powerful. In 1916, Rasputin (the famous "mad monk") was murdered in this building.

Today, visit the Hermitage, one of the world’s greatest art museums. The art collection is housed partly in the old Winter Palace, the St. Petersburg home of the Tsars. The building is as much of an attraction as the art.

After you've had your fill of art, head to the Museum of the Political History of Russia. It gives a good insight into how the Romanov regime ended, and what followed.

End the day with an essential St. Petersburg experience, a river cruise. The city is built on 42 islands so is surrounded by water and interlaced with a complex web of rivers, canals, and channels. The city's classical architecture is low-rise, which means you'll get great views from the water.

Today is yours to explore St. Petersburg as you wish, perhaps spending more time at places that caught your eye during your city tour, or seeking out other places of interest.

In the late afternoon, take a bullet train to Moscow, a journey of about 3.5 hours. Upon arrival, transfer to your hotel and check-in.

After breakfast, it's time for the blockbuster sites of Red Square: St. Basil’s Cathedral and the Kremlin. The morning tour of the Kremlin might be one of the highlights of your trip. The Kremlin is an icon of power, beauty, and majesty, and is one of the world’s very few medieval fortresses still functioning in its original intended purpose as a center of government, a seat of religious authority, a military base, and an expression of raw power. After lunch, have the afternoon to continue exploring on your own.

In the evening, we recommend dining at Vatrushka Restaurant (5 B. Nikitskaya St.), close to the Lenin Library and not far from the Kremlin. It offers a traditional Russian menu.

So far, you’ve seen the big sites of Moscow, but the spirit of medieval Moscow can still be found in out-of-the-way places that fewer tourists go to if you know where to look. So, let’s explore medieval Muscovy in greater detail.

Start by visiting the last remaining sections of the Kitai Gorod Wall, where you'll learn about Moscow’s military defenses and how the largest city in Europe was defended. Then we’ll head through the streets of Kitai Gorod, the heart of the oldest part of Moscow, although most of what you see today was built in the 18th-20th centuries. Finally, stop by the Romanov Boyar House and the Old English Embassy.

Continue touring Moscow today. Kolomenskoye Park was once the hunting preserve of the Tsars. Today it hosts a wonderful collection of traditional wooden buildings from around Russia, as well as a handful of late medieval churches.

The star is the unique 17th-century wooden palace of Tsar Alexei, recreated a few years ago according to original sources. The original palaces in the Kremlin looked much like this. Another highlight is the Ascension Church, built in 1532 and familiar to the legendary Ivan the Terrible.

After lunch, take a boat trip along the Moskva River from the Kolomenskoye Park River Port, from where boats depart every 15-20 minutes. Pass the beautiful Novodevichy Convent, the Stalin-era skyscraper of Moscow State University, Gorky Park, Christ the Saviour Cathedral, the Kremlin and St. Basil's Cathedral. Approaching the city's most famous sights by water allows you to see them from the best vantage points, and you can sit back and enjoy the views.

Today is yours to explore Moscow however you like! Here are some suggestions of what you can do:

You'll be transferred to the airport in good time for your flight. It's time to say farewell to Russia, dasvidaniya!

Discover Russia's two capital cities on this trip to Moscow and St...

This 10-day tour takes you through Russia's two capitals, as well as to...

Explore the capitals of Russia on this 10-day tour, starting in Moscow...
Russia 10-Day Tours & Itineraries

Autumn is short in many parts of Russia, and by late October you can...