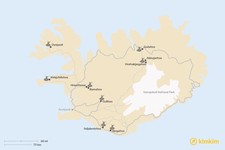 If you want to see incredible waterfalls you don’t need to go very far: many of the most popular giants are only a brief walk away, and many can be seen from the car. While their easy access means larger crowds, they are popular for a reason and you should take the time to enjoy them.

Below are some of the most popular and easiest waterfalls to visit on your trip to Iceland. You can walk to all of these waterfalls from your parked car in 5 minutes or less.  If you prefer to enjoy your waterfalls without the crowds, read more about some of the best waterfalls hikes in Iceland

Skogafoss is one of the largest waterfalls in Iceland (25m wide, 60m tall) and also one of the most popular. You can reach the base by a short detour from Route 1 where you can park within eyeshot of the misty falls. Climb the stairs to the right of the falls and follow the trail to see the view from the top. If you'd like a bit of a hike, follow the Fimmvörðuháls Trail along the eastern bank of Skógá river. Here you will pass another 26 waterfalls (give or take) along “waterfall way”, the first section of the 25km trail to Thórsmörk.

Gullfoss, or “Golden Falls”, is perhaps the most popular waterfall in all of Iceland, partly due to its proximity to Reykjavik along the Golden Circle. The massive falls are separated into a few sections and seem like many impressive waterfalls all combined. There are 2 paths: one above the falls and one that reached the middle. Explore both and try to arrive earlier in the day before the tour buses begin to arrive.

If you make it up to the Westfjords (and you should, the landscapes are beautiful) it’s hard to miss Dynjandi Falls, cascading 100m down the mountain. This jewel of the Westfjords is by far the biggest waterfall in the region and flows down into many other impressive waterfalls and cascades below. Park below all the waterfalls, enjoying each as you follow the trail up to Dynjandi at the very top. Enjoy a picnic sitting at the wooden tables and alternating your gaze between the waterfalls and the beautiful fjord below.

One of the most unique waterfalls you can visit is Seljalandsfoss, on the southern coast about 1.5 hours from Reykjavik. It’s unique because you can walk around the waterfall to see it from behind. It flows over a cave cut into the rock wall, falling 60m about 30 feet away from the cliff side. Play close attention to the wind direction, or you may end up very wet.

While this small waterfall by itself may not compare to some of the others on this list, its setting is what really makes it a worthwhile visit. It flows near Kirkjufell, a pyramid-shaped mountain that is one of Iceland’s most photographed. Walk a couple minutes from the parking lot and over the bridge to the other side of the waterfall where you can recreate one of the most popular photos in Iceland: Kirkjufellsfoss waterfall flowing with Kirkjufell in the background.

Godafoss, the “Waterfall of the Gods” is just a quick stop off of Route 1 east of Akureyri in the north of Iceland. The name originates from around 1000 when Iceland converted to Christianity.  The legend says that when Þorgeir Þorkelsson, local chieftain and law speaker, made the tough decision to convert the country from the old nordic gods to Christianity (in order to prevent war) he threw the old gods into the falls to symbolize the change in beliefs. Further upstream along the river (reachable by car along route 842) you will find Hrafnabjargafoss and Aldeyjarfoss, both in beautiful settings. Because these two are a bit further from the ring road the crowds are much smaller than at Godafoss.

Hraunfossar (“Lava Falls”) and Barnafoss (Children's waterfall) are regarded as some of the most unique and spectacular in Iceland. Clear subterranean water seeps through the lava fields, pouring out of the rocks and creating Hraunfossar. If you visit in autumn the red and orange leaves make a beautiful contrast against the milky blue waters.

P
Pavithra R.
Virginia, United States
"My husband and I had a wonderful 8 day tour of Iceland's Snaefellsnes peninsula and the Golden circle. We had high expectations for the trip, but the actual ..." read more
Traveled to Iceland as a couple in May, 2021

Michelle B.
Oklahoma, United States
"Our trip was beautifully planned by Pauline. We did a 10-Day Winter Drive in the southern half of Iceland. Her itinerary was very detailed with interesting ..." read more
Traveled to Iceland as a family in December, 2019
T
Theresa C.
Vermont, United States
"We had an amazing time and it was so easy to plan. Pauline took into account all of our requests and made it very easy and accessible for us, " read more
Traveled to Iceland as a couple in December, 2019
M
Mary Ellen C.
New Jersey, United States
"Preeti did a fabulous job!!!! Everything was terrific! Very well organized and detailed..... The only activity that we didn’t enjoy as much as everything els..." read more
Traveled to Iceland as a couple in October, 2019
Plan your trip to Iceland
Customize your trip with help from a local travel specialist
Plan Your Trip