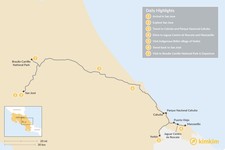 This itinerary begins with Costa Rica's contemporary city culture before veering off to the Caribbean coast, where Afro-Caribbean flavor and indigenous culture show off another, less mainstream side of Costa Rican identity. No trip to Costa Rica is complete without a bit of wildlife watching, which also happens to make for a lovely beach day at Cahuita National Park.

Once you've arrived from the airport to central San José, stretch your legs with a stroll around the Plaza de la Cultura. Watch the teenagers cruising up and down the surrounding streets as you learn to tune out the honking horns of jammed San José traffic. Then duck into the lobby of the Teatro Nacional, on the south side of the plaza, for a look at the detailed paintings adorning the walls, illustrating aspects of Costa Rican life in the 19th century. Enjoy an evening drink at the theater's cafe.

From here, walk to several notable galleries in this pleasant, leaf-shaded neighborhood. TEOR/ética is not only a contemporary arts museum but also the headquarters of a nonprofit arts and culture foundation of the same name and is a great place to catch up-and-coming Central American artists' work. From here, head west to Galería Talentum, whose second floor galleries feature rotating exhibits of contemporary artists.

Enjoy dinner in San José before resting up for your drive to the Caribbean coast.

Pick up your rental car and head out of the central valley, enjoying views of Costa Rica's pastoral countryside before winding your way east over the Cordillera Central and into the wet, green lowlands.

Lunch on some seafood in Cahuita upon arrival, then walk to the entrance of Parque Nacional Cahuita (Cahuita National Park). Take your time strolling the beachside trail, where sloths commonly hang in the branches above. It takes a keen eye to spot the slow-moving creatures, who often look like clumps of foliage. Howler and capuchin monkeys are most commonly spotted here, as well as families of coatis and raccoons. Cahuita offers guest house accommodation; there are several comfortable but reasonably priced places. Higher end guesthouses are located just outside of Cahuita in Playa Negra.

The white-sand beach here is the perfect picture of a tropical, palm-fringed beach, so stretch out, relax, and soak in some beach time this afternoon.

After breakfast, drive the few miles south to Puerto Viejo (de Talamanca) and leave the car behind if you're feeling active. Rent a bicycle in Puerto Viejo, pack some water, don a hat, and pedal four miles down the two-lane road to the Jaguar Centro de Rescate, an animal rescue center rehabilitating orphaned and injured animals for release back into the wild. You may even be treated to a one-on-one encounter with a monkey or a baby sloth!

Continuing south down the road, take lunch at a local eatery before riding or driving the last four miles to Manzanillo, where the road ends. Meander the beach trail, rent a kayak, or simply chill out on the beach before heading back to Puerto Viejo for a Caribbean dinner and beers at a reggae bar. Puerto Viejo has an excellent range of guesthouses in the middle budget range to higher end.

With your local ATEC (Asociación Talamanqueña Ecoturismo Conservación) guide, travel into the mountains of Talamanca for a canoe trip to the indigenous Bribrí village of Yorkín near the border of Panama. Here, a community member will lead you on a walking tour through the jungle to learn about the Bribrí use of medicinal plants before sharing a traditional meal.

The visit also includes hands-on demonstrations of traditional crafts and food preparation, a fascinating experience that supports community-based tourism and traditional ways of life. You'll return via canoe and drive back to Puerto Viejo for the evening.

Savor a late breakfast and spend the day exploring Puerto Viejo's beach, shops, and cafes. If the surf's up, watch the surfers at Salsa Brava, the Caribbean's most infamous surf break. The expat population here has spawned a treasure trove of international culinary options if, for some reason, you tire of the delicious local Caribbean cuisine.

Drive back to San José, a journey of around 4.5 hours.

If you have a late departing flight, take a day trip to Braulio Carrillo National Park, where you can hike independently through various zones of this protected rainforest or whizz above the canopy on a zip line adventure. To choose from a few trailheads of varying distance, drive to the Quebrada González ranger station (about 45 minutes' drive from San José). Or end your trip with the thrill of a zip lining tour.

Family Fun on the Caribbean Side - 7 Days

With your kids in tow, get out and explore Costa Rica's capital city...

Kayaking, ziplining, whitewater rafting, and horseback riding on the...

Travel from the Caribbean coast to the Pacific coast, enjoying outdoor...

Enjoy the best of Costa Rica on this adventurous 12-day itinerary...

From the depths of the sea to the jungle treetops, this exciting 12-day...

M
Melissa D.
Arizona, United States
"We had an incredible time traveling with our children to Costa Rica. The accommodations were incredible places we wouldn’t have been able to find in our own ..." read more
Traveled to Costa Rica as a family in July, 2022