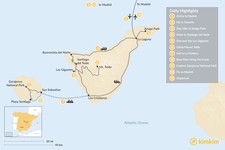 Explore the rugged beauty of the Canary Islands on this adventurous 11-day itinerary. Starting in Madrid, you’ll fly southwest over Spain and the Atlantic to reach the largest island of Tenerife. Hike through ancient ecosystems, climb volcanic mountains, and roam pine forests on horseback before catching a ferry to the small, remote La Gomera. Discover its pristine subtropical landscape on foot, then set sail for a whale-watching excursion around the dramatic coastline. Your final day takes you back to Madrid for a night on the town as you bid "adios" to island life.

Welcome to Madrid! Spend the afternoon getting to know the Spanish capital with a walk around its main sights. Start at the central Puerta del Sol, the city’s largest, busiest plaza, and set off on a self-guided tour. Art and culture beckon at the magnificent Prado Museum, while shoppers and food-lovers should head to the markets of Plaza Mayor. As evening falls, make your way to the Centro neighborhood for the best tapas bars in the city.

Day 2: Flight from Madrid to Tenerife

It's time to say hasta luego to the Spanish capital and head south to the beautiful Canary Islands. After breakfast, a car will transfer you to the airport where you'll catch a 3-hour flight to Tenerife. Make no mistake, Tenerife abounds with as much energy and excitement as it does tradition and amazing landscapes.

Plan your trip to Spain
Chat with a local specialist who can help organize your trip.
Get Started

Stroll down to the marina this morning and step aboard a local tour boat to see the breathtaking cliffs of Los Gigantes from their best angle. Plunging over 2,000 feet (600 m) into the turquoise waters of the Atlantic, "the Giants" are at their most breathtaking when approached by sea. Return to port for lunch at one of the local cafes, ending your meal with a traditional Canarian coffee, nicknamed “barquito” in Santiago del Teide. The mixture of orange peel, coffee liqueur, and condensed milk is a delectable local specialty.

After a leisurely meal, saddle up for a tour of Santiago del Teide by horseback. Discover the area’s natural landscape and native flora and fauna on a two-hour ride into the surrounding countryside of Canarian pine forests and almond groves.

This morning you'll leave your island paradise behind with a ferry from  San Sebastian de La Gomera to Los Cristianos. After catching a departing flight from Tenerife, land in Madrid for your final evening in Spain. Take some time to settle into your accommodation before heading out to explore this diverse marvel of a city. After a quiet week in nature, enjoy the busy energy of the capital with an evening "Paseo" through bustling streets, and a late dinner at one of its many world-class restaurants.

Today you'll bid Spain "adios" and transfer to the airport for your flight home.

Prepare yourself for the road-trip of a lifetime. Over 11 packed days,...

The best way to see the most historic sights in Spain is on a road trip....

Explore the rugged beauty of the Canary Islands on this adventurous...

Spain is the perfect country for a road trip, as the landscapes and...

Discover the highlights of Andalucía, from the Mediterranean coast in...

On this 11-day self-drive adventure you'll visit not only the most...
Spain Self-Drive Tours & Itineraries

Visit the sunny islands of Lanzarote and La Graciosa on this active...

See the jewels of Madrid and Andalusia with this 10-day itinerary. ...
Spain Tours & Itineraries

With two free weeks to spend in Spain, all options for fun and adventure...

Highlights of Spain and Portugal - 19 Days

This 19-day itinerary allows you to visit three different regions of...

How to Get from San Sebastian to Bilbao

San Sebastian and the port city of Bilbao are two essential stops in...

How to Get from Madrid to Andalusia

The distance from Madrid to the province of Andalusia is about 280 miles...

Located on opposite coasts of northern Spain, Barcelona and the Basque...

The distance between Barcelona and the beach town of Begur, located on...
Getting Around Spain