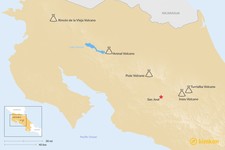 Volcanos define the landscape of Costa Rica, these volcanos created the fertile valleys and diverse ecosystems of the country. If you want to truly experience Costa Rica's nature at its core, visiting these stunning volcanoes is a great way to start. 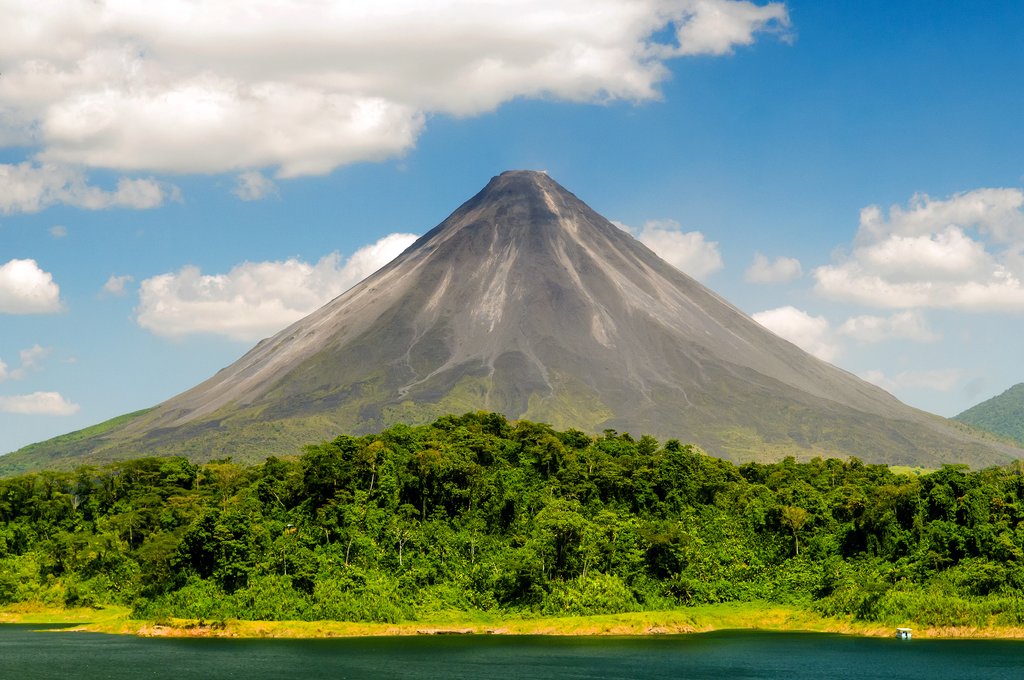 Arenal is an exemplary volcanic cone and perhaps the most famous volcano in Costa Rica for many reasons. Until 2010, it was the most active in Costa Rica, as smoke and lava frequently rose from its peak and steamed up the hot springs. Although Arenal Volcano has been calm since it is still considered active and can erupt at any time.

Other than simply admiring the volcano itself, which towers over the surrounding forest, a trip to Arenal is also great for all kinds of other activities. Even if you stay for an entire week, you’ll still have more to do. Some of the more popular options include whitewater rafting, hiking to the La Fortuna waterfall, canyoning, waterfall jumping, zip lining, and ATV riding.  Whatever kind of adventure tour floats your boat, you can most likely find it here in Arenal.

Perhaps the most interesting destination other than the volcano itself is the hot springs, which are fueled by geothermal heat despite the current state of low volcanic activity. A fair number of spas and hotels offer access to the springs, which contain several mineral pools of varying temperatures and depths. After a long day of adventure, soaking the hot springs is the perfect way to wind down.

Park Admission Fees and Hours: Arenal Volcano National Park is opened from 8:00 am to 4:00pm, 7 days a week and has a $15 entrance fee.

Interested in a custom tour that includes Arenal, check out these itineraries: 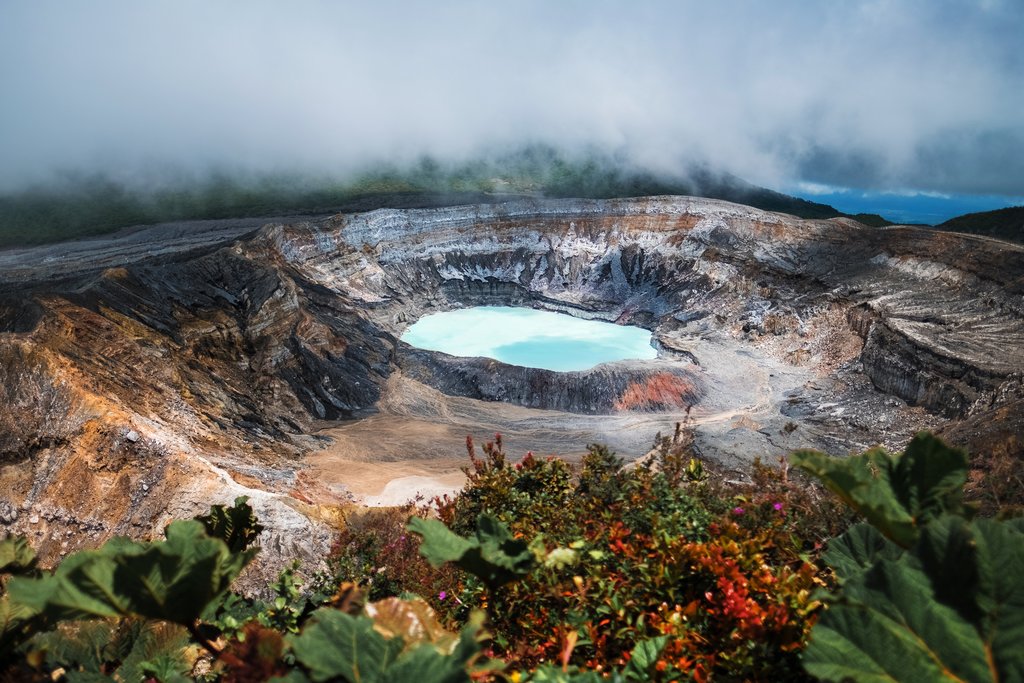 Poás, one of the closest volcanos to the capital, San Jose city,  thus it makes for a convenient and interesting day trip.  The main crater, Laguna Caliente (hot lagoon), contains a lake of boiling green water that is best viewed before noon, when clouds start to form around the peak. If you can’t spot Laguna Caliente, a second crater nearby provides a great view of Lake Botos, a body of rainwater that rests within a dormant volcano.

Keep in mind that Poás Volcano has been relatively active in the past few years: the last eruption just occurred on June 6, 2017. Therefore, if the park is closed, you won’t be able to hike up to the crater.

Park Admission Fees and Hours: Poas Volcano National Park is opened from 8:00 am to 3:30 pm, 7 days a week and has a $10 entrance fee.  Note: Poás National Park is closed due to the recent activity, call the park before you go to make sure they have re-opened.

* Poas Volcano National Park was closed following an eruption in April of 2017. Despite efforts to establish a re-opening date, it's not yet clear when the park will re-open. 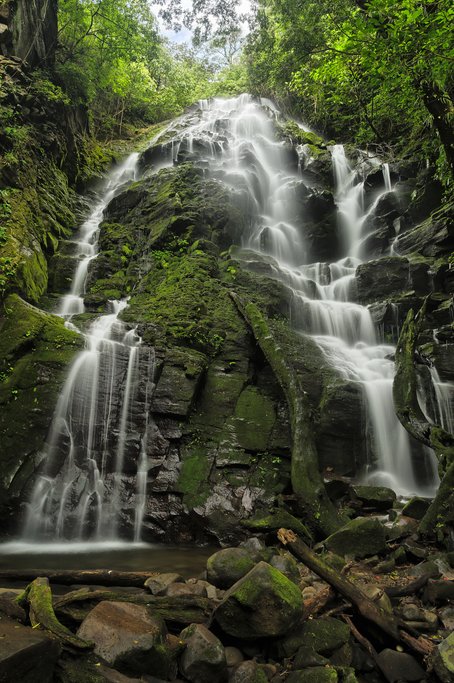 Rincón de la Vieja Volcano is located within its namesake national park in the Guanacaste region. If you happen to be by the coast, coming up to the area for a day trip is a great opportunity for hiking and other activities. Once you enter the park itself, an extensive network of trails can take you to bubbling mud pits, smoking fumaroles, and seasonal waterfalls. To get to the crater, a moderate 8km hike is required.

Many people also come to Rincón de la Vieja for adventure activities; Canyoning, white-water rafting, canopy zip lining, tubing, rafting, and horseback riding can all be arranged. Additionally, like Arenal, Rincón de la Vieja is also home to a collection of hot springs. The springs are said to have therapeutic properties, can be accessed easily, and are a great refresher after a day of activities. 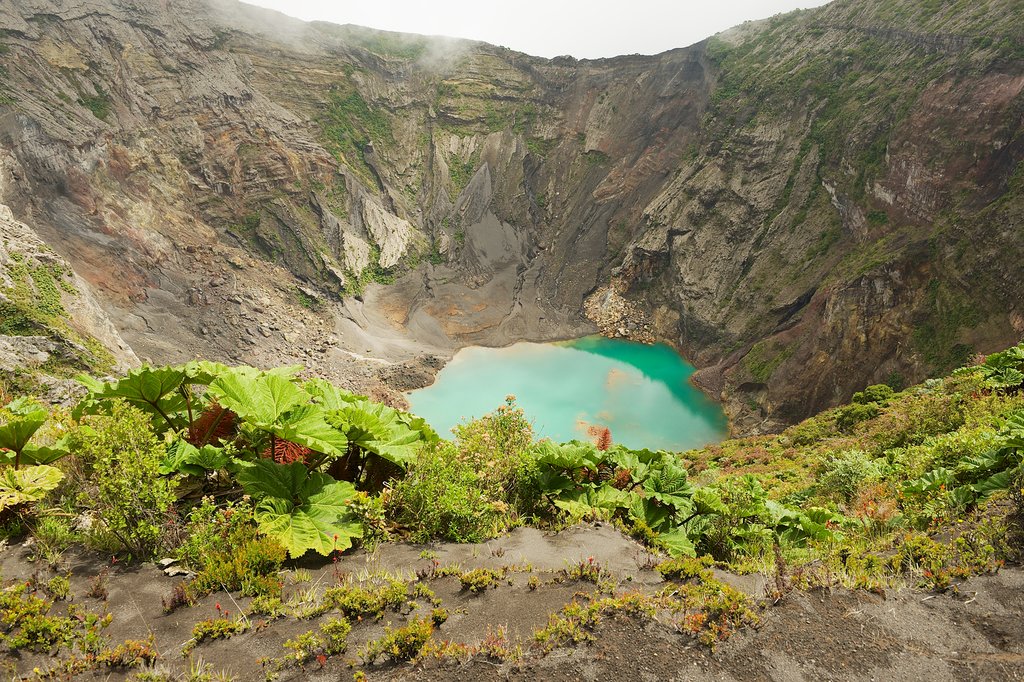 Irazu Volcano, not too far from San Jose, is Costa Rica’s tallest volcano. It is one of the more popular volcanoes and is also located within one of the most visited National Parks in the country. Since Irazu has been dormant for a while and hasn’t seen activity since the 1960s, the park is extremely accessible. 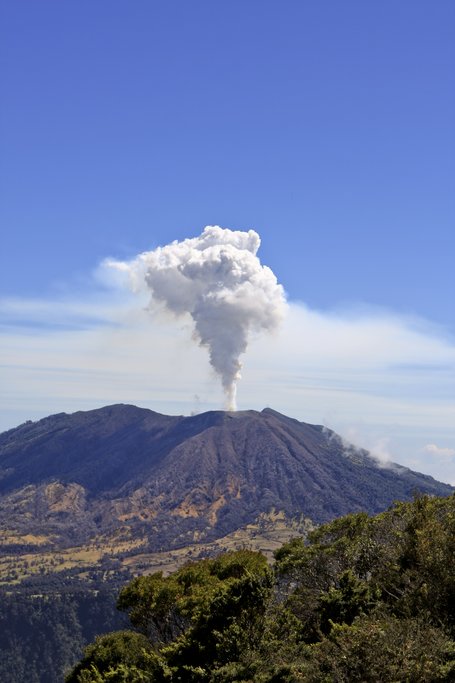 Turrialba got its name after early Spanish settlers saw the massive columns of white smoke, which they called "Torre Alba" (White Tower), emitting from the volcano's crater. After being fairly dormant for a long period of time, Turrialba has seen a steady increase in activity since 2010.  In fact, a triple eruption in 2015 forced the park to temporarily close down, which has lasted until this day.

A decade ago, Turrialba was an ideal trip for visitors who didn’t want the crowds of Arenal and still wanted to experience rainforests and cloud forests.   Even though the park is currently closed, a drive to the edge is still a pretty good idea. The view will still be awe-inspiring, and if you’re lucky, you might even catch an eruption and leftover clouds of smoke!

Park Admission Fees and Hours: Turrialba Volcano National Park is opened from 7:00 am to 3:00 pm, 7 days a week and has a $10 entrance fee.

How Many Days to Spend in Costa Rica

The 5 Best Hotels with Pools in Tamarindo

Though Tamarindo is known for its idyllic coves, inlets, and white-sand...

The 7 Best Boutique Hotels in Tamarindo

Boutique hotels in Tamarindo offer a blend of relaxation and...

The 6 Best Hotels for Romance & Honeymoons in Tamarindo

Tamarindo's reputation for tropical white-sand beaches makes it an ideal...

The 5 Best Boutique Hotels in the Gulf of Papagayo

The hidden coves and beaches along the Gulf of Papagayo's rugged...

The 5 Best Beach Hotels in Tamarindo

If you're planning to visit Tamarindo, it's probably for its renowned...

S
Sarah H.
United Kingdom
"Thanks so much to Randall and team for designing our holiday to Costa Rica, and being so responsive to any requests or changes we had. It was our first time ..." read more
Traveled to Costa Rica as a couple in September, 2022

Seth E.
California, United States
"First time KimKim user and will now be an evangelist. I highly recommend KimKim if you lack time to plan a trip yourself. Bryan was our local specialist, an..." read more
Traveled to Costa Rica as a couple in September, 2022

Victoria C.
Arizona, United States
"Everything was great! Really enjoyed how seamless the process was. Our trip was exactly what we wanted. Our rides all showed up on time, the drivers were ..." read more
Traveled to Costa Rica as a couple in September, 2022

Donna G.
California, United States
"This was truly a vacation that was filled with fun, adventure, delicious food, wonderful people, beautiful nature and animals, peace of mind, and memories to..." read more
Traveled to Costa Rica as a couple in August, 2022

Lisa C.
Colorado, United States
"My husband and I had the most impeccably organized 13-day honeymoon planned by Veronica. She made sure we were able to do everything we wanted and everything..." read more
Traveled to Costa Rica as a couple in August, 2022

Jayshree D.
California, United States
"Both my husband and I thoroughly enjoyed our Costa Rica trip. All the planning of our activities and places to visit was done in conjunction with Yuliana and..." read more
Traveled to Costa Rica as a couple in August, 2022

Motti T.
Maryland, United States
"I'd like to split my review into 2, our experience with kimkim and the serendipity team, and Costa Rica overall: 1. We knew nothing about CR prior to this t..." read more
Traveled to Costa Rica as a family in August, 2022
Create your custom-made trip to Costa Rica
Get Started