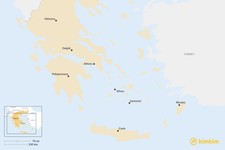 In Greece, the highlights are many. From pinnacles topped with ancient monasteries to the buzzing capital of Athens, paradise islands to ruins once considered the center of the world, here are the country's essential places to visit.

At the southern tip of the Balkan peninsula, Greece is home to cities lively with open-air bars and millennia-old ruins, mountains so staggering they once belonged to the gods, and some 1,400 islands lapped by the Ionian and Aegean seas. The list of places to visit is long—let this be your starting point.

In central Greece, 14th-century monasteries cling to the top of limestone pinnacles that reach 984 feet in the air. There were once monasteries on all 24 pinnacles of the Meteora; six are still occupied, and you can follow the footpaths — or drive the back road — to visit each one. The Meteora is about a four hours’ drive north of Athens.

If there’s one monastery not to miss, it’s Agios Nikolaos Anapafsas for its frescoes of the Garden of Eden. Base yourself in the nearby town of Kalambaka (sometimes spelled Kalabaka or Kalampaka), and you could spend a couple of days exploring the area. If you’re into it, the rock climbing’s famous here too.

If you want to skip the islands and go on a road trip, the Peloponnese peninsula in southern Greece is your spot. Separated from the rest of the country by the Gulf of Corinth, this spot is all dense forests, fairytale castles, classical ruins, medieval towns (hello, Mystras!), mirror-calm lakes, and beautiful seaside towns like Limeni and Kardamyli.

The center of the Ancient World, Delphi was an important city where people came from far and wide to trade — people also came here in search of advice from the renowned oracle, Pythia. On a visit here you’ll see a beautiful theater, the Sanctuary of Athena and its graceful Doric columns, and a stadium where the Pythian Games were once held. It’s all tucked into Mount Parnassus, where the views extend out to the Gulf of Corinth. Situated on the Greek mainland, Delphi is about a three hours’ drive north of Athens.

Plan your trip to Greece
Customize your trip with help from a local travel specialist.
Plan Your Trip

There are endless islands to visit in Greece, and while Sifnos in the Cyclades may not be as famous as Corfu or Crete, here's why it makes the cut:  whitewashed villages that feel like the 'old Greece', secluded coves to swim in, and a seriously world-class food scene. In fact, Sifnos' nickname is the Island of Flavors.

Tavernas in the main town of Hóra use fresh, local ingredients in their cooking.  Think dishes of lamb cooked in red wine, dill, and spices; local goat cheese on salads; and confections sweet with rose water, honey, and pounded almond. Artemónas, just a few minutes away, is known for its bakeries and hot loukoumades donuts.

Santorini is home to the Byzantine blue domes and whitewashed buildings of Instagram dreams. Shaped like a croissant in the middle of the Aegean Sea, the two main towns are Fira and Oia. Oia is where the best sunsets are, and you can walk between the two towns along a footpath that runs along the rim of a giant caldera.

Part of the Cyclades islands, on Santorini it’s worth visiting the ruins of Akrotiri — a Bronze Age Minoan city that was frozen in time by a volcanic eruption nearly 4,000 years ago. Also, check out black sand beaches like Perissa and Kamari, and visit at least one of the truly excellent wineries.

Home to the Acropolis, Michelin-starred restaurants, and all the open-air cafés you could ever hope for, Athens deserves at least a couple of days’ exploring.

This is one of the oldest cities in the world, but its size really exploded after the Greek Civil War when people were fleeing from the countryside. Today, Athens’ tangle of streets and alleyways is home to nearly four million people — that’s more than a third of the entire Greek population.

On a visit, head to the bohemian Exarcheia district for its political street art, and to Gazi and Psyrri for even more great wall art.  Wander through the ritzy Kolonaki area. Spend all the time you can at the Acropolis (go early if you’re in the Greek capital during the summer season), and visit great institutes like the National Archaeological Museum of Athens.

There’s a saying that a Cretan’s loyalty goes first to her island, then to the rest of the country. The biggest and most southerly of the country’s islands, Crete is huge. It spans 160 miles from east to west, so you might not manage to cover the whole island on a trip. Perhaps base yourself in the beautiful city of Chania where Ottoman and Venetian buildings surround a charming harbor. Its Archaeological Museum, set in a 500-year-old church that the Ottomans turned into a mosque, is a fascinating insight into the island and its Minoan history.

You can also bring your hiking boots and trek the Samaria Gorge. Created by 14 million years of rainwater, this is one of the longest gorges in Europe, and it's staggeringly beautiful.  The trail starts at Xyloskalo and ends eight miles later in the coastal town of Agia Roumeli. From there you can take a ferry and then a bus back to Chania.

Rhodes has all the makings of a great Greek island — welcoming people, sandy beaches on the east coast, jagged cliffs that crash into the turquoise sea on the west coast, and charming villages in between. It’s also home to Rhodes Old Town, a UNESCO World Heritage Site where the medieval fortifications measure 39 feet in width, and the brilliantly named Odos Ippoton — Avenue of the Knights — is home to grand medieval buildings like the Palace of the Grand Masters. At one point it was intended, though never used, as the holiday home for Mussolini.

And if you want to go to a truly laid-back island, get the summer boat to Halki island — there's only one village and life there runs on its own time. It's a great juxtaposition to the hustle and bustle of Athens, especially in summer.

Travelers often dream of a trip to “the Greek isles,” but as the country...
Greece Travel Advice

Planning Your Perfect Honeymoon in Greece

Greece is one of the most irresistible honeymoon getaways on Earth....

What to Eat in Crete

Born out of centuries-old traditions, Cretan cuisine is simple and...

Best Places to Eat in Rethymno

Charming Rethymno has more to offer than beautiful beaches and a...

Leticia C.
New Jersey, United States
"Dimitris was such an excellent specialist to work with. He was quick to respond, and was able to accommodate all of my requests even with short notice. Altho..." read more
Traveled to Greece as a couple in August, 2021

Jason C.
California, United States
"Our trip to Greece couldn't have gone better. Beginning with the itinerary creation process, Christos was responsive, and flexible in adjusting the itinerary..." read more
Traveled to Greece as a family in August, 2021

Brad R.
Massachusetts, United States
"Marcus the taxi driver in santorini was HILARIOUS He taught us a lot about the country. To briki. Pirousi were the best restaurants in fira We felt the..." read more
Traveled to Greece as a couple in August, 2021
Plan your trip to Greece
Customize your trip with help from a local travel specialist
Plan Your Trip