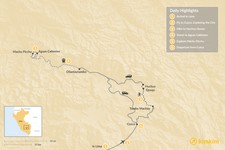 Hike to ancient, off-the-beaten-track Incan sites, trek through breathtaking high-Andes mountain scenery, stay overnight with a charismatic local family, and eventually find yourself among the famous, mysterious ruins of Machu Picchu! Perfect for the adventurous traveler, this tour squeezes a taste of everything into a short, sweet itinerary.

Start your mountain trekking adventure at Tambo Machay — a short drive from pretty alpine Cusco — and climb through a gently rising alpine pasture to your first Peruvian mountain pass, where sweeping views of the Cordillera Urubamba await. From here, continue hiking past serene Lake Quellacocha and cross three more mountain passes before descending, partly on ancient Inca roads, through the rapidly changing ecological layers of the Andean Sierra. End your hike in the isolated traditional community of Huchuy Qosqo and stay overnight in a traditional homestay.

Before you make your way deeper into the Andes, spend some time exploring Huchuy Qosqo. The impressive stone and mud-brick ruins are believed to have been one of the palaces of Viracocha — the eighth Incan emperor. Because the site is remote and there's no road access, you'll likely have the mystical, ancient site to yourself. Once you've explored every nook and cranny, make the steep descent to the road and the village of Lamay for a traditional lunch. Then board a vehicle bound for Ollantaytambo and a train to Aguas Calientes, where you'll spend your second night in the mountains.

Wake before sunrise and make your way to the famous, spectacular ruins of Machu Picchu to watch the sun rise over the ancient city — a high point for any Andean explorer. Considered one of the new Seven Wonders of the World, the old stone city surrounded by impossibly steep, deep green mountains needs no introduction. After sunrise, join a knowledgeable guide on a tour around the massive site, then head off on your own to explore the ruin and some of the surrounding peaks before bidding this special place farewell and boarding your train back to Cusco.

Today is your last day in Peru! You will be met at your hotel for a transfer to Cusco Airport, where you will transfer to your international departure. ¡Buen viaje!

How Many Days Should You Spend at Machu Picchu?

The vast and fascinating Inca citadel of Machu Picchu is what you make...

For tourist-free views of Machu Picchu, visit in January. Peru's most...

The big heads-up for Machu Picchu-bound travelers this month is that the...

The Inca Trail reopens, the wet weather starts to subside and, should...
Best of Aguas Calientes

Where to Stay in Cusco - The Best Boutique Hotels

Cusco and the Sacred Valley are brimming with accommodation, from...

Cusco serves as the perfect base to explore the numerous sights of the...

Best Things To Do In Cusco

The former capital of the Incas, Cusco is today a bustling city that...
Best of Cusco

D
Debbie P.
California, United States
"Our travel specialist, Nicholas Cino, was a joy to work with. We spent approximately 6 months planning our trip and had multiple calls and e-mail exchanges ..." read more
Traveled to Peru as a couple in May, 2022
B
Britt S.
Vermont, United States
"We had such an amazing trip to Peru, thanks to KimKim. Our local specialist, Liz, listened to our preferences to build a memorable itinerary. We had a great ..." read more
Traveled to Peru as a family in May, 2022

Abie E.
California, United States
"Our trip to Peru was amazing! When we arrived to Cusco we were greeted by Justino, an amazing tour guide who faciliated our trip and excursions in Cusco, Mac..." read more
Traveled to Peru as a couple in April, 2022

Jeff O.
California, United States
"When we started planning our trip to Peru we were overwhelmed by all the options we had and all the places we wanted to see. By working with Liz Karen she wa..." read more
Traveled to Peru as a family in April, 2022

Karin G.
Georgia, United States
"Our family has traveled to many places, and we have never used a trip planning service before, much less had guides! Anne was incredible. She answered all of..." read more
Traveled to Peru as a family in April, 2022

Saq M.
United Kingdom
"Once in a lifetime trip! The overall feedback for the trip was excellent. Johanna organised everything so well We couldn't have done it without her. When we..." read more
Traveled to Peru as a group in March, 2022

Yuri L.
Florida, United States
"Anna arranged our trip in a few days! We really didn’t know if we would have time to get a good feel of Peru in 9 days but Anna made it all possible. Excell..." read more
Traveled to Peru as a family in March, 2022
Create your custom-made trip to Peru
Get Started