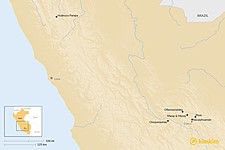 Machu Picchu draws well in excess of one million visitors annually, but hundreds of less-frequented Incan ruins lie scattered in the jungle and mountains around Cusco. Most are surrounded by equally spectacular scenery, and many are reachable via epic hikes. Here's a list of the most impressive Incan ruins to visit while evading the tourist crowds.

Of the below, the Sacsayhuamán, Ollantaytambo and Pisac ruins can be visited easily on day trips by bus from Cusco, combined with a short hike. The Maras and Moray ruins can be done on a day tour from Urubamba or Cusco. Coming here without a guide is also possible via taxis in a long day trip from Cusco. Choquequirao and Huánuco Pampa can be visited through longer hikes from the towns of Cachora (four hours by bus from Cusco off the road to Abancay) and La Unión in the Central Andes.

Take drinking water, warm clothes, and sturdy footwear in all cases, and leave valuables behind if possible. Some of these ruins are remote and caution is advised. In every case except for the Huánuco ruins, these sites can also be visited with guides from the nearest town/city. When visiting any of the sites featured in this article, practice a degree of respect for the locals (i.e. no brazen uninvited photo-snapping) and for the ruins themselves (no clambering over ancient sites that are afforded protected status).

At its most impressive during the Incan festival of the sun, Inti Raymi, which takes place here on the summer solstice, Sacsayhuamán's ruins are close to Cusco and easy to explore on a day trip. They are an interesting example of the Inca tactic of appropriating the strongholds of earlier civilizations. While used by the Inca, Sacsayhuamán's origins date to the Killke people, around 1000 BCE. The zigzagging fortifications are striking, and they make for interesting ruins to hike from Cusco's center.

Get There: Hike from Cusco or take a tour from Cusco combining visits to nearby Incan ruins Q'engo and Pukapukara.

One of the principal towns in the Sacred Valley, Ollantaytambo also impresses with its dual Incan ruins, which flank the town on either side. The main site above Plaza Araccama, consisting of multiple steep terraces, was the stronghold of Manco Inca, who gained a rare victory over Spanish conquistadors here in 1536 (they promptly returned with a larger army and forced Manco Inca to further retreat into the jungle). The site was also used as an Incan temple. More Incan ruins beckon on the other side of town, at Pinkulluna.

Get There: Bus from Cusco to Urubamba, then bus to Ollantaytambo. Both ruins can be reached on foot from the town.

Pisac is a charming, bustling town just one hour by bus from Cusco, and towering above it on a craggy green mountainside are the Pisac Incan ruins. The ruins can be reached via a 2.5-mile hike from Pisac town, or by taxi. Striking tiers of Incan terracing lead up to a ceremonial center, and the views are worth the climb. You can check out Incan baths, irrigation channels and a host of other features that offer interesting insights into the culture.

Get There: Bus from Cusco to Pisac, hike or taxi to Pisac ruins.

Despite being in the Sacred Valley, Maras and Moray have largely escaped tourist attention. Maras is a small town located about 2.5 miles off the Cusco to Urubamba road. The ruins here are very different to those elsewhere in the region. About half a mile north of Maras, an incredible series of salt pans (in use during Incan times but pre-Inca in origin) spill through the valley in dramatic terraces.

Moray is 5.5 miles beyond Maras. Moray's unique feature is that the site features circular terraces not seen at any other Incan ruins. The terraces spread across three areas with the main one resembling an amphitheater in shape. It is believed the Inca would have used the site as an agricultural laboratory for experimenting with the cultivation of various crops.

Visiting Choquequirao is becoming increasingly popular—but for now, this remote and impressive ruin, covering a verdant ridge perched at over 9,840 feet and a 2-day hike above the town of Cachora, deserves its billing as "Machu Picchu without the tourist hordes." As you will appreciate once you make the beautiful trek here, the site was remote enough to be one of the last strongholds of Incan resistance against the Spanish. The site, not fully excavated, contains fascinating features such as a truncated hilltop for ceremonial purposes. It resonates with the mystery that can feel lacking at over-visited Machu Picchu.

Get There: Bus from Cusco bound for Abancay, to Cachora turn-off, then bus to Cachora, then 4-day out-and-back hike.

Also known as Huánuco Viejo, these ruins constitute one of the last Incan citadels to fall to Spanish conquistadors, defended until 1543. The site sprawls across a wide area on a wild plain, reachable with a 2-hour hike above the town of La Unión (itself a 6-hour bus ride from Huánuco in the Central Andes). Sometimes, taxis will take you from La Unión to a stopping point within a 20-minutes hike of the site.

Get There: Bus from Huánuco to La Unión, then hike or taxi to Huánuco Pampa.

This colorful adventure around Bolivia and Peru introduces you to the...

On this action-packed 8-day trip, you will get to spend time in the...

Starting your trip in ancient Inca capital Cusco, you will travel to the...

This six-day glamping and hiking adventure is for the nature lover who...

You will start this 16-day adventure in Ecuador's stunning Andean...

Jeff S.
Louisiana, United States
"This was a 5 plus star experience and completely exceded my expectations. Steve worked with me with my times and desires. For example, I had no desire to sp..." read more
Traveled to Peru as a couple in March, 2020
Create your custom-made trip to Peru
Get Started