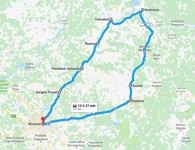 Explore the old Russia of onion-domed churches rising behind medieval walls, traditional wooden peasant cottages, and legendary, expansive countryside. You'll experience the highlights of rural and provincial Russia in a short time on this seven-day tour, traveling beyond Moscow and St. Petersburg and getting the chance to visit lesser-known places including Vladimir, Yaroslavl, and Suzdal.

Welcome to Moscow! After arriving and checking in to your hotel, the rest of the day is yours to spend at leisure. Depending on your time of arrival, you may have time to get a glimpse of the famous Red Square, with onion-domed St. Basil's Cathedral at one end, or to ride the Moscow Metro.

Leaving Moscow behind, you'll drive for around two hours to your first stop of the day, Sergiev Posad. This otherwise ordinary town is home to Russia's most important monastery, the magnificent Trinity Lavra. This houses the shrine of the national saint, Sergius. You may think of Sergiev Posad as Russia's version of the Vatican. It's a stunning place to stop and take photos.

Continue on for about an hour to Pereslavl Zalesky. This landlocked town was the unlikely birthplace of the Russian Navy, a story you'll hear when you stop here. The town also has some early medieval churches. Of all the stops on this route, Pereslavl is probably the most authentic example of a typical provincial town. Few tourists come here, and most are Russians from Moscow.

Continue for another hour to your stop for the night, Rostov, where you'll sleep in a hotel within the walls of the medieval Kremlin.

Spend the day in Rostov Veliki, a photographer's paradise. The town has a monastery that seems straight from the history books, with onion domes rising over battlements, overlooking a lake and surrounded by forest. Wooden houses line the roads. This is an under-visited yet quintessential stop on the Russian Golden Ring circuit. Afterward, drive for about an hour to Yaroslavl.

This morning, explore the Volga River city of Yaroslavl, with its charming river walks, wonderful Kremlin, and churches. Yaroslavl features on Russian money, and you'll enjoy a walk along the river to soak up the atmosphere.

In the afternoon, drive for about 90 minutes to Kostroma, where you'll spend the night.

Today, explore Kostroma, a town that few foreigners visit but that is a favorite of Muscovites, who love the slower pace of life and the friendliness of the locals. The star attraction here is the Ipatiev Monastery, which played an important role in the rise to power of the famous Romanov dynasty.

Today you’ll explore Suzdal, one of central Russia’s fairytale towns. After visiting the Kremlin, check out the Wooden Architecture Museum, where you’ll be able to venture inside peasant huts, wooden churches, and get a taste of what life was like over a century ago.

On your way from Suzdal to Vladimir (30 minutes), you’ll also visit the Church of the Intercession on the Nerl, widely considered to be the most sublime and elegant example of medieval Russian architecture.

Vladimir was the capital of the once-mighty Grand Duchy of Vladimir (1150s to 1330s) when Moscow was simply a border garrison town. You’ll have a general tour around Vladimir to see the Uspenski and Dmitrovksi Cathedrals and the Golden Gate. These are jewels in the crown of old Rus architecture, and rare survivals from that almost legendary epoch of Viking marauders, epic trading voyages and heroic principalities.

After lunch, drive to Moscow, a journey of about four hours.

It's time to say goodbye to Russia for now! After breakfast, you will be taken to the airport to catch your flight home.