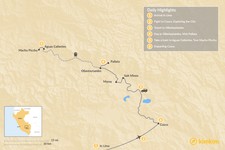 If you're looking to combine some adventure with a tour of Machu Picchu at the end, consider this three-day itinerary. The Sacred Valley is a hotbed of great day adventures, given its steep terrain along the Urubamba river and dramatic scenery. Choose from a selection of activities — from zip-lining, ATVing, single-track mountain biking or paddle-boarding before your visit to Peru's most famous ruins.

Your trip starts off with an adventure. At 8 am, you’ll get picked up at your hotel and will head out for an ATV and Zipline tour. Above the Sacred Valley, you will go down a two-kilometer zip-line, the longest in the world.

Then, you’ll hop on an ATV (four-wheeled quad bikes with a driver) to see the amazing countryside of Peru. You will see people pasturing their animals, working their farmland with wooden plows and bulls, and often collecting firewood on their backs for their homemade stoves at home. After exploring around, you will drive the ATVs down to the salt mines and also over to the Moray ruins.

After the tour, you will be dropped off in the town of Ollantaytambo where you will stay in a beautifully restored Inca Canchon (stone house for the Inca) in the heart of the village. It has a 3000 sq. foot garden with plenty of room to relax after your tour.

Day 4: Ollantaytambo (day visit to the village of Pallata)

In the early morning, ascend the ancient ruins of Ollantaytambo for spectacular views of the valley and town at sunrise. By going early in the morning you’ll avoid the crowds. After lunch, head up the valley from Ollantaytambo (either by car, foot or horseback) to a local village, where you can see a traditional way of life.

Today, you’ll head out early for your train to Aguas Calientes. After about a one hour and 40-minute train ride, you will arrive in Aguas Calientes where your guide will be waiting for you at the train station. He will explain to you when and where to meet for your shared tour of Machu Picchu. From there, either hike up to the ancient citadel or grab a bus ticket at the counter nearby. Your guide can point you in the right direction.

After your guided tour of Machu Picchu, enjoy the ruins on your own and relax in this amazing sanctuary. In the afternoon, head down for your train back to Cusco. At the train station in Poroy, a driver will be waiting for you to bring you back to your hotel.

Today is your last day in Peru! You will be met at your hotel for a transfer to Cusco Airport, where you will transfer to your international departure. ¡Buen viaje!

On this tour, you'll explore the ancient streets of Cusco, then head to...
Peru 6-Day Tours & Itineraries

Places to Go Before or After Machu Picchu: Options for 1 ...

The Incan citadel of Machu Picchu is the most popular destination in...

Cultural Highlights of the Sacred Valley

The Sacred Valley is one of Peru’s most popular destinations. Once the...

Best Adventures in the Sacred Valley

Twice as deep as the Grand Canyon, the Cotahuasi is the deepest canyon...
Peru Tours & Itineraries

Lima is a majorly underrated destination for travelers with kids in tow....
Peru Destination Guides

Embark on a quick-yet-adventurous five-day tour of Northern Peru’s...

In just over one week, explore the best of Northern Peru. Begin in...

Archaeology & Culture in Northern Peru: From Trujillo to ...

Explore the culture and archaeology of Northern Peru on this eight-day...

This 8-day tour is perfect for history buffs with a sense of adventure....

Steeped in history, this fascinating tour covers the most important...

S
Swetha B.
New York, United States
"Not sure where to start but this trip was pre-planned way ahead of time to accommodate our vacation and kids spring break for 2020! And NOT to forget our 15t..." read more
Traveled to Peru as a family in March, 2020
G
Galina R.
Arkansas, United States
"Kimkim team has provided excellent service. All scheduled activities were in time, shared guided tours were well organized and well performed. Did not have a..." read more
Traveled to Peru solo in March, 2020

Jeff S.
Louisiana, United States
"This was a 5 plus star experience and completely exceded my expectations. Steve worked with me with my times and desires. For example, I had no desire to sp..." read more
Traveled to Peru as a couple in March, 2020
S
Steve S.
Michigan, United States
"The trip to Peru was fantastic. Cesar Surco, our guide post Lima, was exceptional in every way. He was patient, kind, knowledgeable and an absolute genius ..." read more
Traveled to Peru as a group in February, 2020

Carlos D.
Virginia, United States
"My wife and I used Kimkim for our honeymoon to Peru. Their services, prices, availability of their staff and willingness to accommodate our travel arrangemen..." read more
Traveled to Peru as a couple in December, 2019
Create your custom-made trip to Peru
Get Started