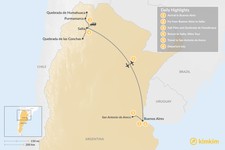 Immerse yourself in Argentina's rich culture and beautiful landscapes in this quick six-day itinerary. Begin by exploring the metropolitan capital of Buenos Aires. Next, visit the colonial city of Salta, your jumping off point for the rugged gorges, salt flats, and painted deserts of Argentina's far north. Top it all off with a visit to San Antonio de Areco, a traditional cowboy town where you'll stay on a working estancia.

This morning, transfer to the airport to board your flight to Salta, one of Argentina's most impressive Spanish colonial cities. Upon arrival, you'll be greeted at the airport and transferred to your hotel.

Take the rest of the day to get settled in and enjoy the town. Easy to explore on foot, the city's compact colonial center is lined with gorgeous Neo-classical buildings, lively cafes, and bars teeming with a young and trendy crowd.

Today you will leave Salta and tour the natural highlights of the region. This is an overnight excursion by private vehicle that travels mostly around Jujuy Province, north of Salta. Because this tour is relatively brief, it's best to leave your main luggage at the hotel in favor of day packs.

Your excursion begins early in the morning. Initially, you'll travel along the same route as the famous Tren a las Nubes (Train to the Clouds), a tourist train that connects the Argentine northwest to southern Chile via the Andes Mountains. This route zigzags between lonely mountain roads and the seemingly endless expanses of high desert plains, with nothing around you except the great blue sky. Sporadically breaking up the vast emptiness will be the sight of the occasional humble home or tiny mountain village. Along the way, you'll even have the opportunity to stop and visit pre-hispanic ruins!

Your first stop will be the small town of Campo Quijano and later the impressive Quebrada del Toro, a gorge through which the Tren a las Nubes also passes. Here you'll stop for a coffee break as well as to enjoy some stunning viewpoints. Then you'll visit Santa Rosa de Tastil, a pre-Incan settlement dating back to the XIII century. After a visit to one of the smallest villages in the region, San Antonio de los Cobres, you'll arrive at the Salinas Grandes Salt Flats. The natural light conditions here are so optimal that you're guaranteed to take amazing photos even if it's your first time picking up a camera.

Finally, later in the afternoon, you'll arrive at your comfortable hotel in Purmamarca. This popular village, filled with adobe houses and craft markets, is located at the base of Jujuy´s iconic Cerro de los Siete Colores (Hill of the Seven Colors) in the historic valley of the Quebrada de Humahuaca.

After breakfast, you will begin the return trip to Salta. However, you will first stop off at another winery. That's right, even in the arid north of Argentina, in the valley of the Quebrada de Humahuaca, you'll find bodegas producing stunning Malbec and Syrah varietals. So enjoy another tour of local vineyards and the fruits of the vine.

Afterward, you'll return to Salta via a beautiful drive along the bright red mountains of Quebrada de las Conchas. Here in this gorge, wind and rain erosion of the topography has resulted in some fascinating natural rock formations. Many of these protrusions are so wildly shaped that they've earned colorful nicknames, like Garganta del Diablo (Devil's Throat). There's also a natural amphitheater here which has excellent acoustics.

You'll then transfer back to your hotel in Salta.

Get ready, because you have a big travel day ahead of you. First, you'll transfer to the airport and hop a flight to Buenos Aires. Upon arrival in the capital, a driver will meet you and transport you to a historic estancia (country home) located on the Pampas, central Argentina's famed prairie, near the town of San Antonio de Areco.

This charming town is located about an hour from downtown Buenos Aires and is notable as being ground zero for Argentine gaucho tradition. San Antonio de Areco abounds with folk history, so much so that it inspired famed Argentine author José Hernández's epic poem, Martín Fierro. The fictional narrative is told not unlike a ballad as it recounts the exploits of its eponymous hero as he endures life on the frontier. The poem is a national treasure and represents the spirit of rural Argentina, which you'll feel all around you in San Antonio.

As for your residence during your time here, El Ombú de Areco is a late-colonial-style mansion built in 1880. It sits on expansive green grounds and offers visitors a magnificent setting for an unforgettable stay in the Argentine countryside. Today you have a variety of options for activities: you can go horseback riding, hiking, or sightseeing in an old-fashioned, horse-drawn carriage. This estancia is also a working farm, and you can observe typical ranch-style activities such as herding animals, branding cattle, and milking cows.

In the evening, you will enjoy a typical Argentine asado as well as musical performances and folkloric dance.

After transferring back from the countryside, enjoy your last hours in the cosmopolitan capital of Buenos Aires. At the scheduled time, your driver will pick you up and transfer you by private car to Ezeiza International Airport, where you'll catch your return flight home.

Experience winter at the end of the world on this 6-day guided...

If Argentina is the breadbasket of South America, then Mendoza is the...

Explore the highlights of Argentine Patagonia on this six-day...

Best of Salta & the Northwest

Discover why Salta is called 'La Linda' (the beautiful) on this 5-day...

If you're looking to do a deep-dive into northwestern Argentina, this...

Immerse yourself in Argentina's rich culture and beautiful landscapes in...

This 5-day itinerary explores a special area of northwest Argentina...
Best of Salta & the Northwest

From the subtropical waterfalls of Igauzú to the subpolar forests of...

While many itineraries through the vast country of Argentina focus on...

This thrilling 15-day itinerary takes you to the highlights of Patagonia...

Escape to one of the most beautiful regions in the world, Patagonia!...

Frances X.
Canada
"We had a great two-week trip around Argentina. The trip includes a good balance of history, culture, scenery, and cuisine in each of the locations we visited..." read more
Traveled to Argentina as a family in August, 2022