The North of Iceland may be the country’s best-kept secret. While crowds of tourists populate the South and Golden Circle, visitors to Akureyri and Lake Myvatn can enjoy the beautiful landscapes and wonderful volcanic areas all to themselves.

Enjoy the restaurants, nightlife, and beautiful setting of Akureyri, Iceland’s second city with only a fraction of the crowds. Watch for Whales from Husavik, the whale watching capital, and spend some time exploring the volcanic and geothermal wonders around Lake Myvatn. 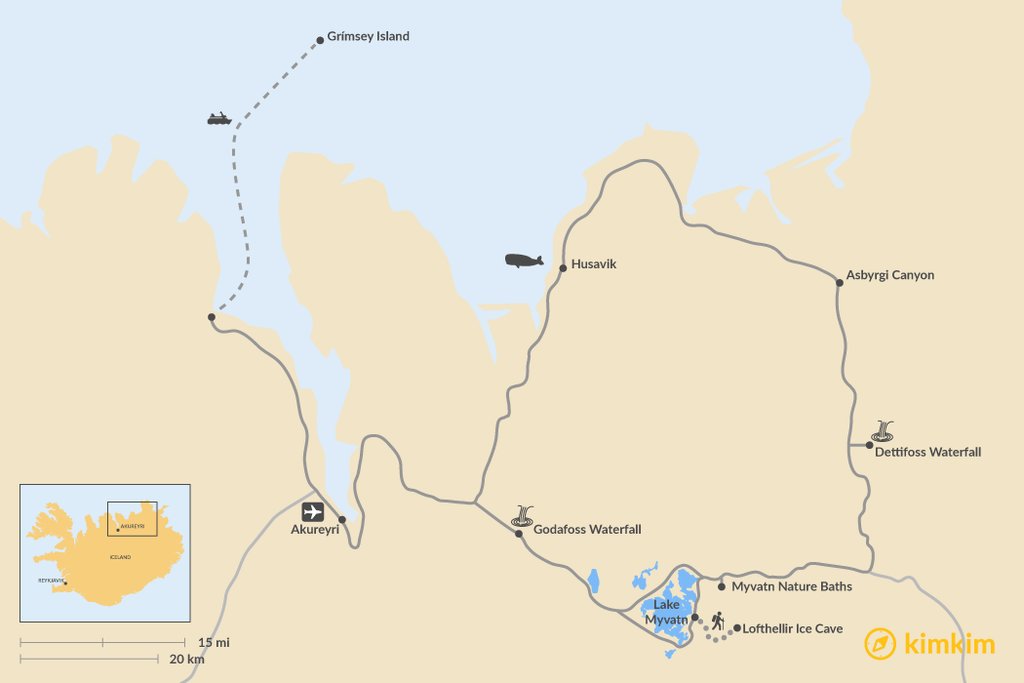 If you’re driving around the ring road, plan to stay at least 2 full days in this area before moving on. Akureyri is only 4.5 hours from Reykjavik by car, making it a great alternative to the more crowded south, with the sights more concentrated. If you’re short on time, consider a 45-minute domestic flight over the majestic highlands (beautiful by plane) and spend 1-2 days before flying back.

Iceland’s second largest city (18,000 people) sits on Iceland’s longest fjord and makes a great base for exploring the north.

Day trip to Lake Myvatn for volcanic and geothermal hiking, to Husavik for whale watching, or simply enjoy the beautiful scenery around the fjord.

While in Akureyri, check out the thriving restaurant, cafe, and bar scene, walk along the calm old harbor, and visit the Akureyrarkirkja church on the hill. Nearby you can plan sailing and horseback riding trips, or going skiing in winter on some of the best slopes in Iceland.

Iceland’s whale watching capital is just over an hour’s drive from Akureyri, making it a good day trip option or a stopover on a loop to Godafoss, Asbyrgi, Dettifoss, and Lake Myvatn.

Unlike in other regions where you must sail a while to find whales, Husavik often has whales, porpoises, and seabirds a few minutes from the harbor. Join a tour on some newer, carbon-neutral ships that are quieter (nicer for whales) and don’t pollute the environment (nice for everyone). Check out the whale museum and the church by the harbor before further exploring the region.

The area surrounding Lake Myvatn has the highest concentration of volcanic and geothermal sights in Iceland. In one day you can explore pseudocraters, rock formations, lava fields, hike up and around a volcanic crater, dip in a thermal pool in a cave, see mud pools and steam vents, see a lake in a volcano, hike a lava area from another world, and finish the day relaxing at the Myvatn Nature Baths with a view over all you just accomplished.

Read more about the best things to do around Lake Myvatn

Plan your trip to Iceland
Chat with a local specialist who can help organize your trip.
Get Started

A 30-minute drive from Lake Myvatn (or on a loop from Husavik and Asbyrgi) brings you to Dettifoss, Europe’s most powerful waterfall. A brief hike upstream along the basalt cliffs and you will encounter another giant: Selfoss. If you’re looking for a longer hike, consider hiking a 9 km / 5.5 mi trail to Hafragilsfoss.

Godafoss Waterfall, the “waterfall of the Gods”

On the route from Akureyri to Lake Myvatn it’s impossible to miss Godafoss, the “waterfall of the Gods”, hike a couple minutes to see the waterfall up close, or take a longer walk around to see if from multiple perspectives.

The waterfall was named when Iceland converted to Christianity in 1000. The legend says that when Þorgeir Þorkelsson, local chieftain and law speaker, made the tough decision to convert the country from the old nordic gods to Christianity (in order to prevent war) he threw the old gods into the falls to symbolize the change to the new era.

This 3,500-year-old lava cave is one of the most interesting caves in Iceland. Welcome to the land of ice and fire where strange lava formations meet beautiful ice sculptures in complete darkness.

You can see the steam of the Myvatn Nature Baths from all around Lake Myvatn. Take your time and stay a while to enjoy the warm mineral water while you gaze at Lake Myvatn’s wonders below. Unlike at the Blue Lagoon, there is no salty seawater here, so your hair will be just fine. Other than the views, the best part is the absence of people compared to the Blue Lagoon.

Just north of Dettifoss towards the coast, this giant horseshoe-shaped canyon is said to be left by Sleipnir, the eight-legged horse of the Norse god Odin. Others believe it was caused by large floods when glaciers burst and melted almost 10,000 years ago. The canyon is 1km / 0.5 mi wide, 3.5km /2mi  long, and up to 100m / 300ft high in some places and offers some spectacular views.

This island sits only a little ways off the north coast, as the only place in Iceland north of the Arctic Circle. You can reach it by ferry or a short flight and enjoy the quiet away from the other tour groups. With about 10,000 birds for every human resident, you’re likely to see lots of wildlife as well (wear a hat). Spend your time birdwatching, cycling, diving, sailing hiking, or just relax and enjoy the midnight sun.

East Iceland is home to some of the best hiking in the country,...

Don't have a lot of time to roam around Iceland? This compact yet...

Lake Myvatn, in the northeast of Iceland, is packed with volcanic and...

The Best of the North: 2-3 Days around Akureyri and Lake ...

The North of Iceland may be the country’s best-kept secret. While crowds...

For a unique Iceland experience, avoid the crowds of the south...

Take a different route—past the large crowds in the south—on this quick...
Best of Lake Myvatn

Northeast Iceland is more remote and wild than its southern counterpart....

Where to Eat & Drink In Akureyri

Despite being Iceland’s second largest city, Akureyri is home to a mere...

Best Things to Do in Akureyri

Whether it’s summer or winter, Akureyri proudly reigns as Iceland's...

Lake Myvatn, in the northeast of Iceland, is packed with volcanic and...

The Best of the North: 2-3 Days around Akureyri and Lake ...

The North of Iceland may be the country’s best-kept secret. While crowds...
Best of Northern Iceland

How to Get from Patreksfjörður to Isafjordur

Given the remoteness of the relatively untouched Westfjords region,...
Getting Around Iceland