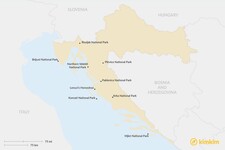 To visit Croatia is to become part of its landscape of natural wonders. Its national parks may be the country’s best known conservation areas, but even in the nation’s capital, Zagreb, visitors are surrounded by protected regional parks, forests and even a mountain.

The following selections represent just a few of Croatia’s natural treasures spread from the Dalmatian coast well into the heartland.

Croatia’s best known natural wonder. It’s like an open-air museum conceived by Mother Nature. Just 90 miles southwest of Zagreb, Plitvice is a wonderland of sound and sight with rushing waterfalls of every size and description. It has 16 lakes, each of which appears to be a different shade of turquoise, and panoramas of forested land that are nothing short of spectacular. This is where you go to be awed by nature.

About 56 miles south of Zadar at Skradin, a town just north of Šibenik in northern Dalmatia. Krka is similar to Plitvice in that its waterfalls are a main attraction. Unlike Plitvice, Krka’s waterfalls are generated by the Krka River, not lakes. More than 60 percent of the river is part of the park and Krka is loaded with a diverse selection of flora and fauna. Swimming is permitted in the river at Krka. 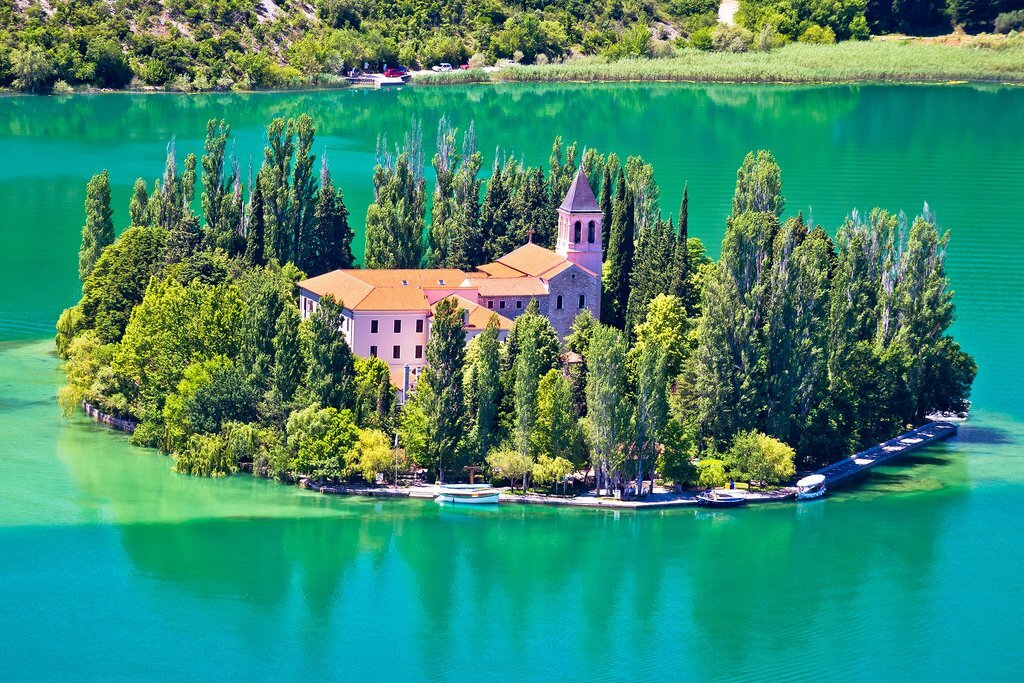 Accessible in an easy day trip from Dubrovnik. Its main draws are two salt lakes—one large and one small—surrounded by forests. There is a small island on the larger lake, where a Benedictine monastery and church still stand. Mjlet is a low-key island whose warm lakes are believed to have healing properties. It also is rich in flora and fauna and a laid-back place to hike. Legend has it that Ulysses was held captive on Mjlet by the nymph Calypso for seven years. Not so legendary is the island’s history with snakes. Mjlet was infested with them until 1910 when the mongoose was introduced to get rid of them. That worked, but the mongoose had no natural predators and overran the island. Some bird species are still recovering.

Plan your trip to Croatia
Chat with a local specialist who can help organize your trip.
Get Started

Located in Croatia’s Gorski Kotar region in the most mountainous and heavily forested area in the country. Risnjak (rihz-nyak) is just 15 miles northwest of Rijeka and an easy ride from Zagreb on the A6 highway. Risnjak itself is mostly mountain but its proximity to two large population centers makes it one of the most visited national parks in Croatia. Climbing, hiking, flora, and fauna are its main draws.

A string of 14 islands southwest of Pula and the Istrian Coast. Brijuni is best known as Tito’s “Camp David,” but it also is notable because of its history as a Roman settlement and the place where researcher Robert Koch eradicated malaria on the island at the turn of the century. Brijuni also is home to the first golf course in Croatia, Tito’s wild game reserve and a large number of Mediterranean plant species. Brijuni has no permanent residents, and the only way to visit is via organized tours, which leave several times a day from the docks at Fažana.

A park for active vacations. This rugged mountain range is perfect for hikers, cyclists, photographers and others who want a challenge. Northern Velebit is just south of Senj on the coast. It is the newest of Croatia’s eight national parks (1999) and open from May to November, depending on snow conditions. The park is a unique environment that is home to a diverse list of plant, animal, and mineral varieties. The Velebit Botanical Garden is there, and it has been designated a monument of landscape architecture in its own right.

This park lies about 100 miles south of Northern Velebit in northern Dalmatia. Paklenica has 120 miles of hiking trails and its climbing opportunities are more diverse than Northern Velebit’s: There are 360 of them, all at different levels of difficulty and length, making Paklenica the most popular rock climbing destination in Croatia.

A collection of almost 90 islands and reefs that covers 125 square miles off the coast of Šibenik. The islands actually are underwater mountains whose tops are above water. Kornati’s most spectacular sites are beneath the sea and accessible to divers only. The islands are uninhabited but managed by the nearby island of Murter. You must have a ticket to sail or snorkel around the islands and a SCUBA certification to dive there. Several organized tours leave from Šibenik.

Learn more in our Ultimate Guide to Kornati National Park 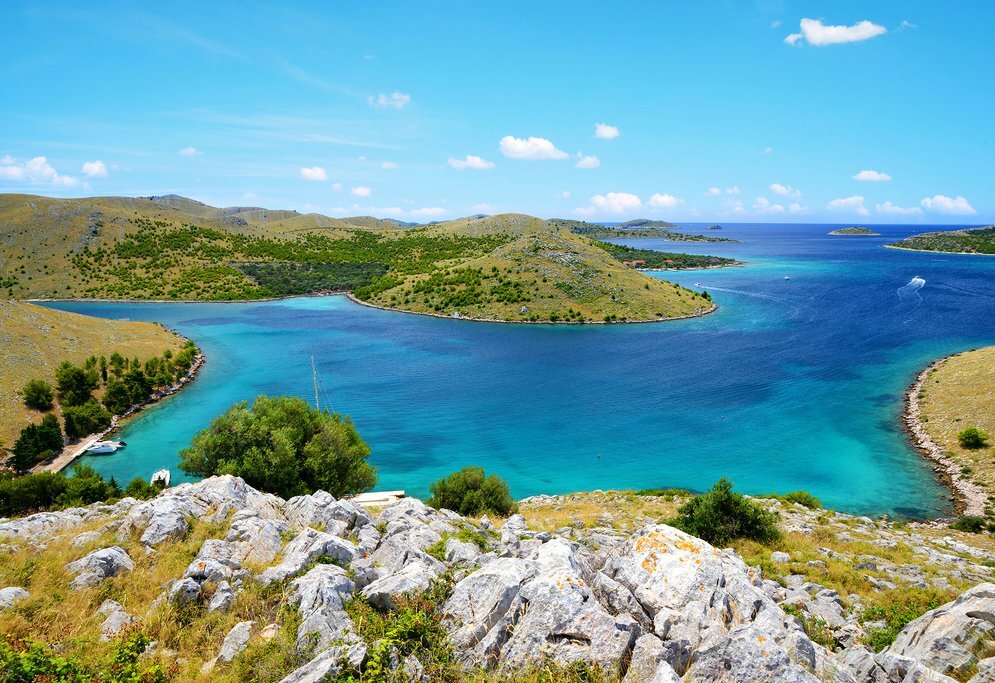 A u-shaped string of seven landscaped, urban park squares in Zagreb planted with thousands of flowers and trees. It runs from Jelačić Square to the main train station, past the Zagreb Botanical Garden, and back to the city center. This city green space was designed and built in the 19th century, and whether you explore or just sit on one of the benches and chill, you can take in sites like the iconic Croatian National Theater, several museums, monuments, lots of outdoor statuary, and shops and restaurants from almost anywhere on the green.

To visit Croatia is to become part of its landscape of natural wonders....

The Best Things to Do on Korčula

Korčula isn't just beloved by tourists; it's also a favorite among...

In a week, there's plenty of time to experience the highlights of...

Explore Croatia's Dalmatian islands on this active tour, starting on the...
Best of Mljet Island

To visit Croatia is to become part of its landscape of natural wonders....

Best Things to Do in Zadar

Zadar is a vibrant seaside city in Northern Dalmatia with roots dating...

The Istrian peninsula doesn’t quite feel like the rest of Croatia, and...

Croatia is a family- and kid-friendly destination, filled with hiking,...
Best of Istria

How Many Days to Spend in Croatia

In this 12-day itinerary, you'll wind your way from Zagreb, the capital...
Croatia Tours & Itineraries

Two weeks in Croatia allows you to spend time in three to five...

This 14-day family adventure takes you to some of Croatia's standout...

Immerse your family in the many charms of Croatia with this 14-day tour....

With 10 days in Croatia, you can explore the family-friendly beaches and...

In a week, you can cover three to five destinations, opting for an...

The easiest and quickest way to travel to Dubrovnik is to fly: Dubrovnik...

Plitvice Lakes National Park is a UNESCO World Heritage Site and the...
Getting Around Croatia

Erin K.
Canada
"We are first time clients for travel with Kim Kim and had the privilege to work with Nikola to plan a 16 day trip to Croatia with my family (husband and thre..." read more
Traveled to Croatia as a family in July, 2022
H
Helen M.
California, United States
"Anna Maria is the best! She handled all the arrangements perfectly and made adjustments when the weather was inclement. She was always reachable and responsi..." read more
Traveled to Croatia as a couple in November, 2022

Ron B.
Canada
"What a perfectly orchestrated trip. The hotels were great overall - comfortable, good locations, lovely hosts. The 16 Lakes guesthouse was neat with a delig..." read more
Traveled to Croatia as a group in September, 2022

Paul A.
New York, United States
"So I was very nervous to tour Croatia by myself and as a travel agent, I know how important it is to have someone who invest in knowing what type of tour wor..." read more
Traveled to Croatia solo in November, 2022

Dwight W.
Canada
"Robi was great to work with, flexible throughout when we needed small adjustments. He had selected great places to visit, accommodations and recommended re..." read more
Traveled to Croatia as a couple in October, 2022
S
Sara R.
Massachusetts, United States
"Croatia is awesome and I would go back, my whole family would, tomorrow. The people, the history, the blue sea, the wine, the food, all of it made this the b..." read more
Traveled to Croatia as a family in October, 2022