With its lush landscape and truly endless days of summer, Norway is a prime destination for mid-year travels. Hike among fjords, visit quaint towns, and stay up late to experience the magic of a never-setting sun.

In summer, all of Norway awakens. This is the "Land of the Midnight Sun," where days of hiking fjords, sipping Norwegian coffee, and setting foot on ancient Viking lands don't have to end. Small, bustling cities can be found far away from the trodden tourist path, and the wilderness opens up to your two feet. Here's just a start to the list of possibilities found in Norway. 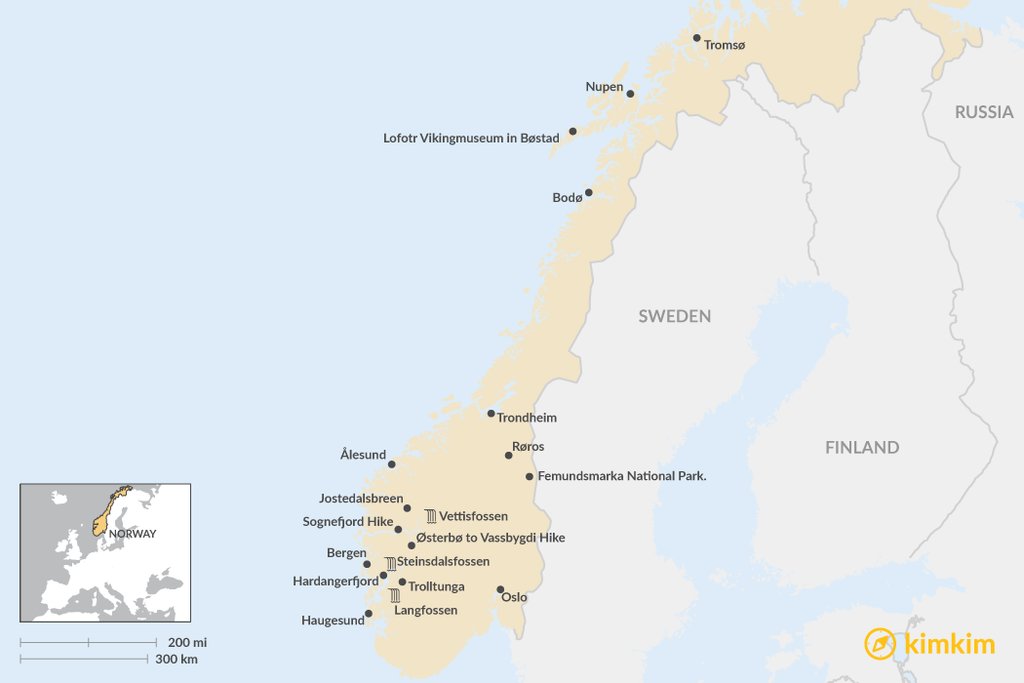 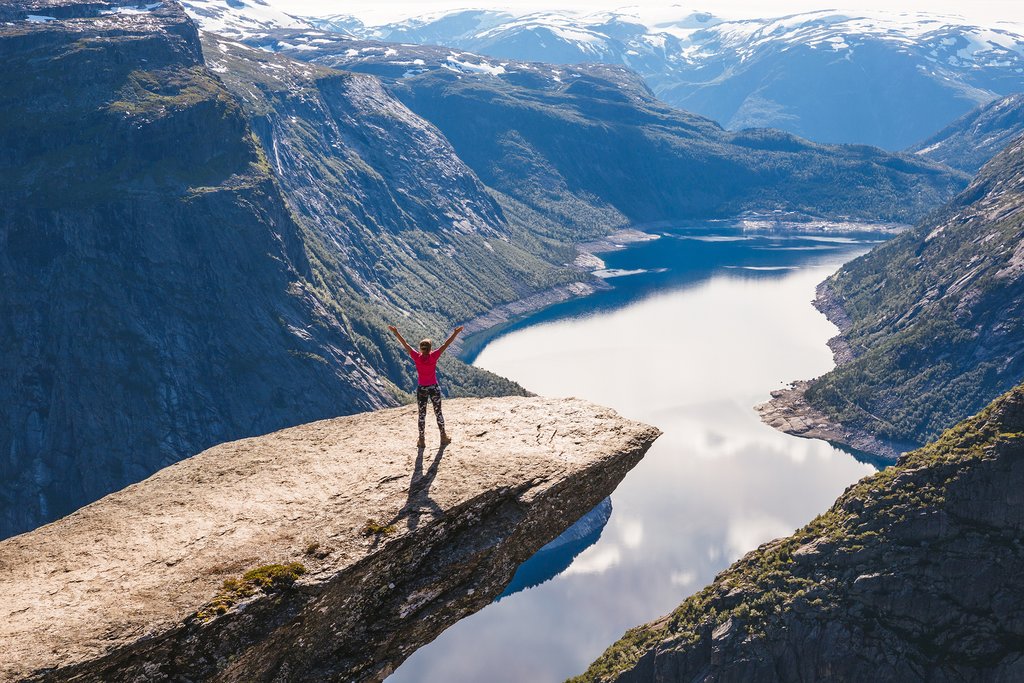 Western Norway is a treasure trove of intricate waterways known as fjords, the largest being the Sognefjord. It snakes inland for 120 miles (200 km), framed by mountains that rise nearly 7,000 feet (2,000 m) into the air on either side. In terms of out-of-this-world scenery, rivaling Fjord Norway is a tall order.

Trekking the Sognefjord, you'll pass waterfalls and jagged peaks, ancient villages (including the oldest stave church at Urnes), and the biggest glacier in all of Europe, Jostedalsbreen. It's also here that you'll run across the Aurlandsdalen Valley, often referred to as Norway's Grand Canyon. A popular hike is the 12-mile trek from Østerbø to Vassbygdi, and know that it's popular for a reason.

But not to be overlooked is the Hardangerfjord — it's here you'll find Trolltunga, Vøringsfossen Waterfall, and quaint waterside towns like Jondal and Rosendal — and the Geirangerfjord, a UNESCO site in and of itself. This downright majestic stretch of water is home to many well-known abandoned farms (Skageflå can be reached on foot) and impressive waterfalls, like de Syv Søstre, or the Seven Sisters. 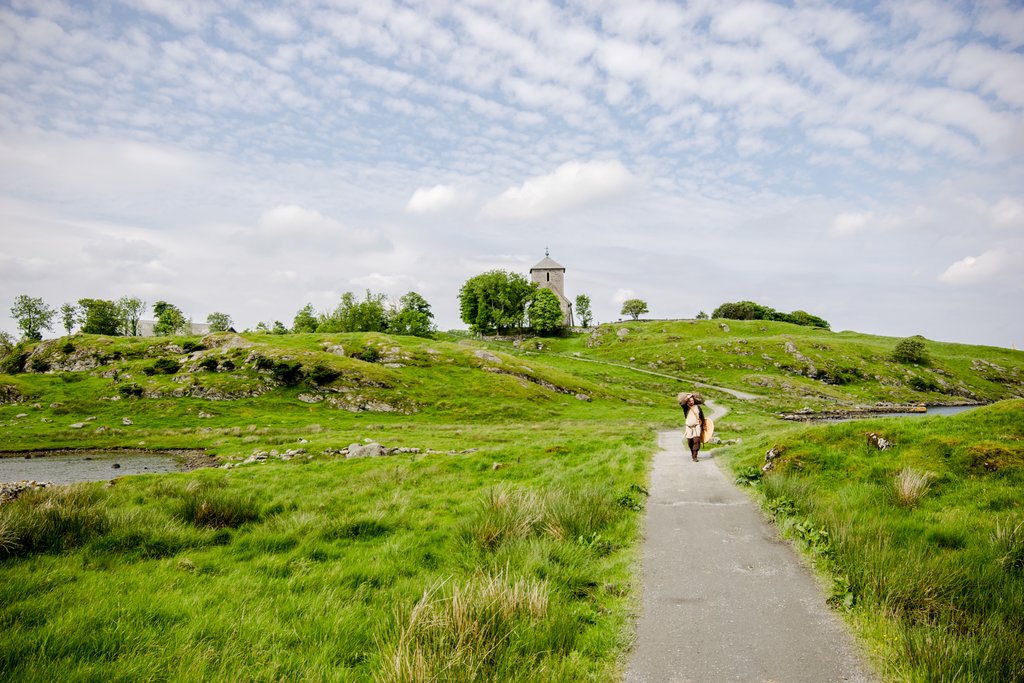 The city of Haugesund is known as the "birthplace of Norway,"  and the Nordvegen History Centre at Avaldsnes sits on what's thought to be the most ancient of Viking ground. Stop into the museum, wander the hillsides, and take a moment to watch the excavators — they're still digging up artifacts from a thousand years ago.

In Oslo, don't miss the Viking Ship Museum for an up-close look at the world's best-preserved Viking ship; in Bergen, head to the Maritime Museum for a walk through Viking life. And at the Lofotr Vikingmuseum in Bøstad (on the Lofofen Islands), you can even take to the water and see what it's like to row a Viking ship. 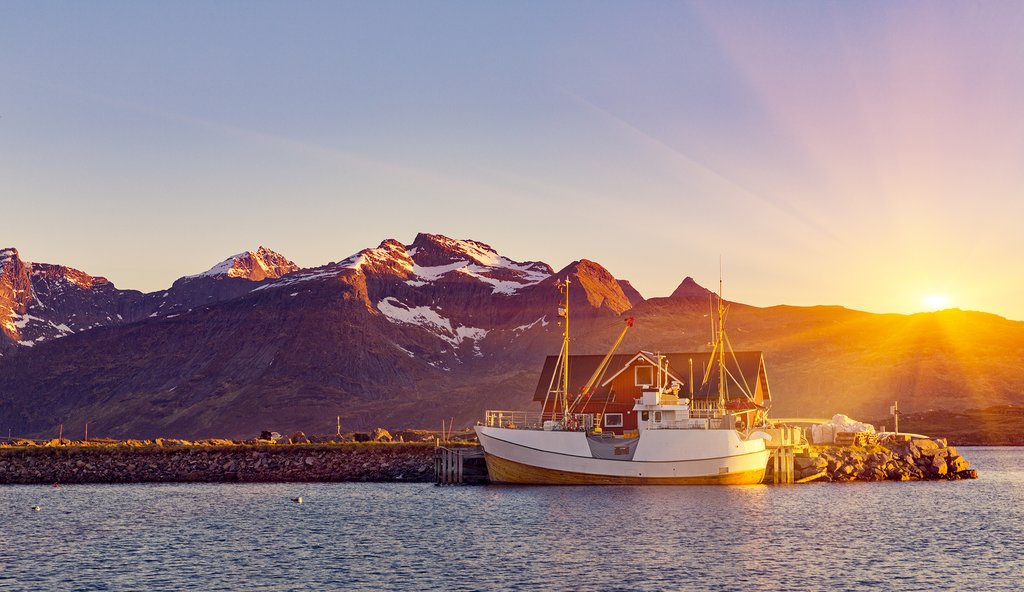 Even cities like Bergen and Oslo experience some degree of the "midnight sun" during summer — you'll walk down the street at 11 pm, noticing a bluish tint to the air that never quite fades. But to truly be confused by looking up at the sky and then down at your watch, head north toward the Arctic Circle. Sunset seems to last hours, and the sky only turns to oranges, reds, and pinks before lighting up again.

In Tromsø in summer, the cable car taking you to the top of the city runs past midnight. At Nupen, near Harstad, just park your car by the road and watch the sun never quite dip below the water. In Bodø, go midnight golfing, kayak in golden waters, or even grab your hiking shoes. Otherwise, head to Longyearbyen (can you decipher the name?) for the longest chance possible: four months of constant daylight. 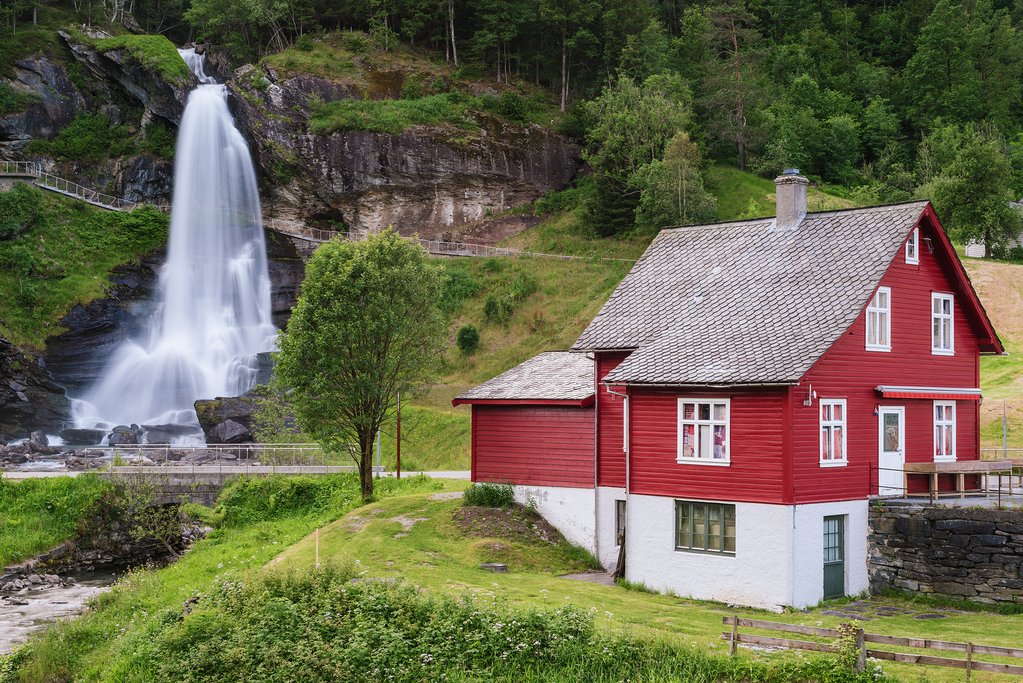 It's in summer when Norway's powerful waterfalls reign supreme: 1/3 of the world's tallest 30 waterfalls are here, and sometimes the only way to narrow down the list is to find which is closest.

Depending on your location, here are three solid options: Walk behind the turbulent Steinsdalsfossen near Norheimsund (along the Hardangerfjord) or watch the tallest unregulated free-fall drop in the country at Vettisfossen, in the Utla Valley. Or simply pull over the car to see Langfossen, which catapults into the Åkrafjord, but not before dipping under highway E134 (and yes, there's a large viewing area to take photos).

Go Off the Beaten Path 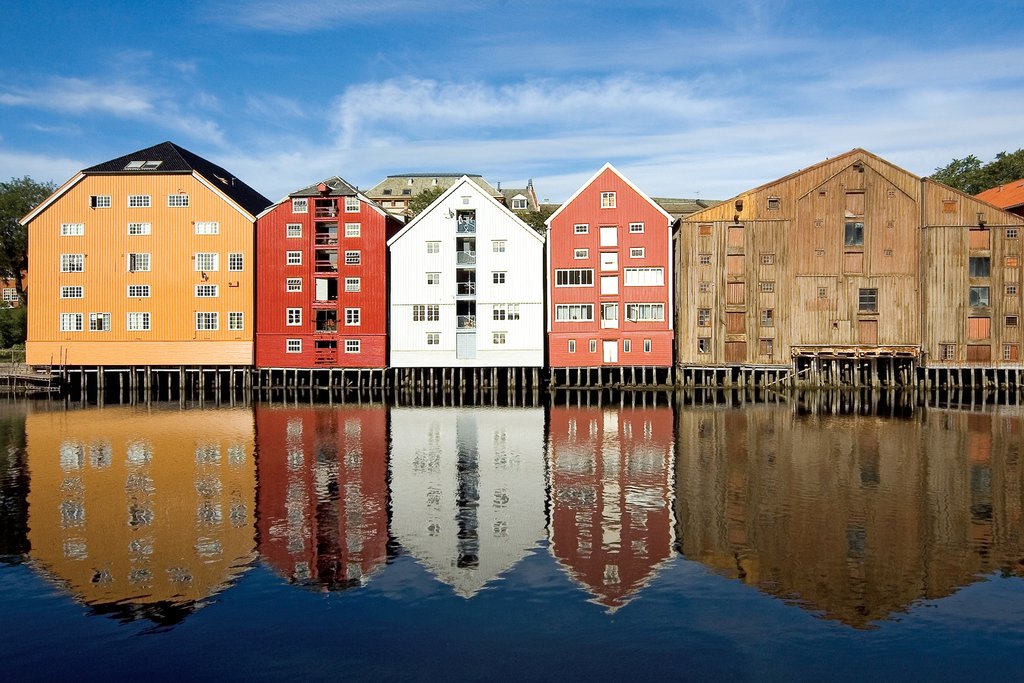 It's easy to make stops in Oslo and Bergen and feel like you've experienced Norway, but the country is far more complex than its two most populous cities. Any traveler should consider off-the-beaten-path locales like Trondheim, Ålesund and Røros when crafting an itinerary.

In Trondheim, you'll see a mixture of both an ancient Norwegian capital and a vibrant student center (where 30,000 call home). If nothing else, make time for the Nidaros Cathedral (built in the 11th century over Saint Olav's remains) and the colorful wooden houses of Bakklandet. This is the city's Old Town, and now it buzzes with cafés, shops, concerts, and festivals, while still holding onto a 17th-century feel.

Ålesund, on the other hand, stretches across several islands into the Geirangerfjord. It's an Art Nouveau town (rebuilt in the early 1900s) while still being a gateway to Norway's pristine wilderness — you can walk or hike along the coast, up the Sunnmøre Alps, and along the fjord (or hop on a wildlife sea safari). And it probably doesn't get as cold as you think: Thanks to the Gulf Stream, it rarely dips below 32°F (0°C).

Røros is a completely different kind of town — the entire village is a UNESCO World Heritage Site, and it's one of the oldest "wooden towns" in all of Europe. Walking these narrow streets is a portal into a simpler time, akin to walking around a real-life museum. Norway’s third largest lake, Femunden, is here, and so is Femundsmarka National Park. In other words, it doesn't get much more off-the-beaten-path than this.

Norway is a dream destination — unbelievably scenic, packed with...

With nearly 60,000 miles of coastline (including the islands), Norway is...

You’ve probably heard of New Nordic cuisine, but that’s only the tip of...

Viewing the Northern Lights is an experience like no other, and Norway...
Norway Travel Advice

Take in some of Norway's most impressive natural landscapes on this...

Experience Scandinavian culture and dramatic landscapes at a slower pace...

Stop dreaming of the fjords and experience them for yourself with this...

Take yourself on a 10-day journey through the Arctic landscapes of...

Explore northern Norway at your own speed with this self-drive...

Reaching the base of the famous and impressive Pulpit Rock is relatively...

Anita C.
New York, United States
"Our 14 day trip to Norway was phenomenal! Linda did an amazing job curating our trip with a special overnight at a farm to table dogsledding adventure with K..." read more
Traveled to Norway as a couple in November, 2019
J
Jah N.
New York, United States
"I contacted KimKim for a much needed solo trip away and I was thinking about Norway. Julia was my specialist and she was fantastic! Not only did she liste..." read more
Traveled to Norway solo in November, 2019

Kum C.
Malaysia
"My trip was planned by Fridur and after a lot of messages back and forth, the entire schedule was turned upside down or rather north south reversal and no re..." read more
Traveled to Norway as a couple in November, 2019

Rituparna B.
Arizona, United States
"Our trip to Northern Norway and the Finnish town of Kilpisjarvi was a dream come true. Our tour guides, Gareth and Amanda from Adventure by Design were aweso..." read more
Traveled to Norway as a family in November, 2019
Plan your trip to Norway
Customize your trip with help from a local travel specialist
Plan Your Trip