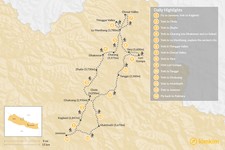 The Upper Mustang trek is the ultimate gateway to the mysterious world of the old Buddhist kingdom of Mustang, also called Lo. Once forbidden and isolated from the rest of the world for decades, the area was able to evolve within its own distinctive culture and rich traditions closely tied to Tibet. This moderate, lesser-known trek passes through one of the driest regions of Nepal and provides spectacular mountain scenery.

Mustang—commonly referred to as 'Upper Mustang'—is an arid river valley that runs north-south off the upper corner of the Annapurna Circuit. Both culturally and geographically, it's more similar to Tibet than Nepal and used to form its own kingdom, with its capital in Lo Manthang (the turnaround point of your trek). Lying in the rain shadow of the Himalaya, and officially one of Nepal's restricted regions, this trek is known for its desert beauty and harsh, cliff-faced landscapes.

Upper Mustang lies in the rain shadow of the Himalaya, making it a great monsoon trek and open year-round for trekking. The main consideration is the winter, when most residents leave the capital to avoid the cold and snow. Generally, the best time to visit Upper Mustang is from March to early November.

Jomsom is the starting point for almost all routes heading into the Upper Mustang region. Most people choose to fly between Pokhara and Jomsom (a 20-minute flight) to save time and to avoid the arduous bus or jeep journey by land. The official checkpoint for the restricted region is Kagbeni, just north of Jomsom.

The itinerary below starts and ends in the city of Pokhara, which is a 25-minute flight from Kathmandu. Your trip can also be organized from Kathmandu, according to your preference.

If you're interested in a more unique perspective on the Upper Mustang and have the time, below is an extended version (by two days) of the trek that follows the eastern side of the Kali Gandaki valley, as opposed to the more trodden, western route.

All trekkers heading into Upper Mustang (north of Kagbeni) are required to purchase a $500 per person permit, which is valid for 10 days. You can stay longer, but every day after that will cost $50. At Kagbeni, you'll be required to show your permit both on the way and the way out. In addition to the restricted permit, you'll also need to purchase an Annapurna Conservation Area Permit (ACAP), which is $20 USD per person.

As with other treks in Nepal, teahouses are available along the entire trek in Upper Mustang. Teahouses are simple houses, often the home of the family that runs them, and offer basic meals in a communal eating hall along with bedrooms, usually with two single beds.

Below is a list of what's included and excluded from the price for the standard itinerary. 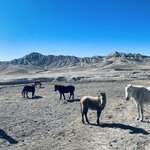 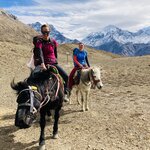 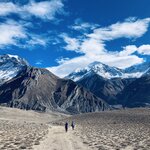 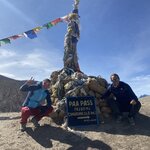 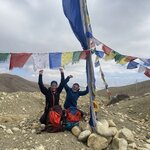 The Upper Mustang trek is the ultimate gateway to the mysterious world...

One of Nepal's most classic short treks, this route takes you to the...

This 15-day trek offers stunning views of Mount Everest and the...

Rick B.
Texas, United States
"Our trek of the Manaslu circuit in Nepal arranged by Kripa was outstanding. During this post-Covid planning phase, Kripa answered our hundreds of questions i..." read more
Traveled to Nepal as a group in March, 2022

Melinda S.
New York, United States
"Sangita did a wonderful time setting up all of the details of my trip. The hotels I stayed at were comfortable and in great locations, the daily tours were ..." read more
Traveled to Nepal solo in April, 2022

Jennifer S.
California, United States
"My daughter and I had a fantastic time during our stay in Nepal. Ngima and his team took excellent care of us. We arrived as clients but felt like friends an..." read more
Traveled to Nepal as a group in October, 2021

Sophie S.
Switzerland
"We really like the trekking ! It was as we expected, the organisation was perfect and Sangita is very available and kind. She answers fast and precise and sh..." read more
Traveled to Nepal as a couple in November, 2021
Create your custom-made trip to Nepal
Get Started