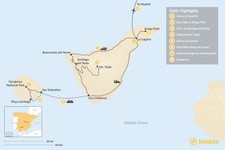 Escape to an unspoiled island paradise on this 8-day exploration of Spain’s remote Canary Islands. Start on Tenerife, where lush rainforests and towering mountains welcome you to a unique ecosystem. Hike through ancient woodland, climb Spain’s tallest volcano, and discover idyllic Canarian villages. End your stay on the neighboring island of La Gomera, where you’ll venture deep into its volcanic landscapes and spot whales along its northern coast.

Welcome to Tenerife, the “Island of Eternal Spring.” Make no mistake, Tenerife abounds with as much energy and excitement as it does tradition and amazing landscapes.

Catch a ferry from the southwest Tenerife port of Los Cristianos to arrive in the island's capital of San Sebastian de la Gomera, then head south down the coast to reach the quiet seaside town of Playa de Santiago. Settle into your accommodation and get some rest—tomorrow, you'll set out to explore  “La Isla Magica” in depth.

This morning you'll leave your island paradise behind with a ferry from San Sebastian de La Gomera to Los Cristianos. From there, it's time to say goodbye to Spain and catch your flight home.

Eight days is enough time to have the trip of a lifetime—particularly...

Escape to an unspoiled island paradise on this 8-day exploration of...

In a little over a week, you can embark on the road trip of a lifetime...

Discover the highlights of Andalucía, from the Mediterranean coast in...
Spain Self-Drive Tours & Itineraries

The Best Things to Do in Mallorca

Known as the "jewel of the Mediterranean," Mallorca is the largest of...

The Best Things to Do in Bilbao

Bilbao is known for gastronomy and the architecture of Frank Gehry's...