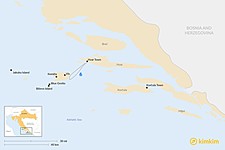 Southern Dalmatia is a sailor's paradise, starting in Dubrovnik sailing past miles of secluded coastlines and several don’t-miss islands. Korčula, Mljet, Lopud, Hvar, Brač, and Vis just to name a few of the islands. You'll find some of the best kayaking and windsurfing in this region. We put together a list of Southern Dalmatia's most popular areas to sail to on your next trip.

Korčula is one of the closest islands to Dubrovnik. It has a medieval Korčula Town, a gorgeous mix of beaches, vineyards, villages, and quiet, harbor-side restaurants and resorts. Rent a bike or scooter and explore the island and its many hidden beaches. To get a unique local experience, join a wine and cycling tour of the Lumbarda region or hike the ancient Napolean path across the island.

Party into the wee hours in Hvar Town, which has an international vibe and is surrounded by luxury hotels, bars, and restaurants. Rent a bike for less than $20 a day and pedal along a challenging route lined by fields of lavender, 16th-century architecture, and a family resort. On the Stari Grad Plain, you'll find ancient Greek ruins from the 4th century BCE and the quaint towns of Jelsa and Vrboska. And to get more views, take an off-road tour of Hvar.

Vis is becoming a popular port of call for sailors. Vis’ history as a Yugoslav military outpost kept tourism from taking hold for decades. This left the island with unique markets and kiosks selling produce, fresh-caught fish, local organic wine, and artistically bundled bunches of dried lavender. It is one of Croatia’s least-visited islands but one of the most fascinating.

Vis Town on the island’s northeastern end is the island’s main port. Komiža at the western end of the island is a fishing village and jumping-off point for boat tours to attractions like Biševo Island, the Blue Grotto, and Jabuka Island.

Jabuka (pronounced ya-boo-kah, translates to Apple Island) is an uninhabited volcanic island—a vertical rock formation. In between are breathtaking coves best reached by private boat, rolling hills covered with vineyards, and picturesque churches and villages. Diving around the island and farther out to sea is becoming a major activity around Vis.

The best way to see the islands is to charter a sailboat. Most chartered trips offer only private week-long trips. If you do not have a week, there are full-day sailing tours. Join an excursion to Vis island, where the boat stops for swimming and snorkeling. You can choose to charter a private boat for the day or sail with a group.

Expert tip: Outside of the major cities, Croatia is mainly cash-based. There are ATMs, but make sure to carry plenty of local currency on hand, especially when you visit Vis and the islands or countryside on the mainland.

The Dalmatia region of Croatia is often called a nautical paradise, and...

Enjoy five days of sailing on a private boat between three of Croatia's...

Enjoy 10 days of sun and sea on a private sailboat as you cruise to and...

Sail to four of Croatia's most popular Adriatic islands—Vis, Korčula,...

In a week, there's plenty of time to experience the highlights of...
Croatia Sailing Trips & Itineraries

Southern Dalmatia is a sailor's paradise, starting in Dubrovnik sailing...

How Many Days Should You Spend in Dubrovnik?

Whether you have two days or two weeks, Croatia is a fun and beautiful...

How Many Days Should You Spend in Croatia?

S
Shelli A.
Maryland, United States
"My family enjoyed every aspect of our trip to Croatia. We loved all the places we visited; each place gave us a fuller appreciation of the country and the d..." read more
Traveled to Croatia as a family in June, 2022

Christa M.
California, United States
"My family (my husband and two teenage kids) cannot express properly in words how fabulous our trip was to Croatia. Antonia was beyond incredible! I started..." read more
Traveled to Croatia as a family in June, 2022
J
Johann W.
Iceland
"We had an amazing time in beautiful Croatia. Anna-Maria put together an great adventure for us tailored to our wishes. Throughout the process she was ext..." read more
Traveled to Croatia as a couple in June, 2022

Laurie B.
New Hampshire, United States
"We had the most wonderful trip to Croatia and that’s because we used Kimkim and our amazing trip designer Nikola. This was a no stress, safe, and fun vacati..." read more
Traveled to Croatia as a couple in June, 2022
R
Robert B.
Florida, United States
"Robbie and Bruno were amazing guides! Robbie organized the entire trip and he did a great job. We loved how Robbie personalized the entire tour. Two highl..." read more
Traveled to Croatia as a family in June, 2022

Linda H.
Canada
"My daughter and I travelled from Zagreb to Dubrovnick by car, catamaran, car ferry and boat ! We had a wonderful holiday and all of the connections and hot..." read more
Traveled to Croatia as a couple in June, 2022