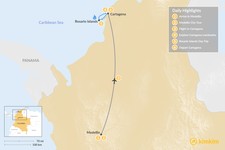 What's better than immersing yourself in the culture, cuisine, and nightlife of one famous Colombian city? Doing so in two famous Colombian cities. In less than a week you'll get to do just that, starting in the "city of the eternal spring," Medellín. Enjoy the trendy restaurants and cocktail lounges of this revitalized metropolis. Then, fly to Cartagena—a well-preserved fortress city and a throwback to a time when the kingdom of Spain ruled the New World. Snap photos as you wander its colonial streets, sample the fresh seafood and visit the nearby Rosario Islands.

Welcome to Colombia and the "city of the eternal spring"! Despite its turbulent past, Medellín today is quite charming with its beautiful mountain setting, friendly locals, and vibrant culture. A car will pick you up at the airport and transfer you to a nearby hotel. You're now free to spend the remainder of the day exploring.

Start by visiting Parque Lleras, in the heart of the trendy El Poblado district, where most of the city's tourism is centered. This is where some of the best dining, nightlife, and hotels are located. Perhaps take a ride on the city's gondola (Metrocable) system to see the views, or walk around the various parks, plazas, and museums near the downtown area. Either way, enjoy the weather—due to its elevation, Medellín has year-round spring temperatures.

After breakfast at your hotel, spend a full day exploring Medellín on a walking tour with a local guide. This excursion includes a mix of sightseeing by foot and taking the Metro system through a neighborhood that represents one of the city's most successful urban projects.

The guide will pick you up from your hotel and drive you to Medellín's downtown. You'll visit Plaza Botero, which features works by Colombia's foremost sculptor, Fernando Botero. Then it's time to take a ride on the city's iconic Metrocable gondola system, during which you'll enjoy panoramic views of Medellín below. Next, stop in at the Botanical Garden, which features more than 4,500 types of flowers. After visiting some parks and landmarks in the downtown area, you'll eventually return to your hotel by public transport. (There's also a tour option that includes graffiti street art and riding the Metrocable to more remote neighborhoods higher in the hills.)

The rest of the afternoon and evening is yours to enjoy at your leisure.

After breakfast, you'll transfer to the airport for your flight to Cartagena. This colonial fortress city on the Caribbean is rich in culture, architecture, romance, and even pirate history. Upon arrival, a driver will meet you at the airport and transfer you to your hotel.

Depending on the time of your arrival, you'll have a few options for activities. You can relax and enjoy the hotel amenities or get right into the mix with a neighborhood walk, either by yourself or with an English-speaking guide (optional add-on). Here are some other ideas to consider:

Finish the day with mojitos and fresh ceviche in one of the city’s hip restaurants or rooftop bars.

After a leisurely breakfast, prepare to dive into the city. First, head outside the colonial Old Town to the Mercado Bazurto, an expansive market bustling with vendors selling everything from fresh fish and produce to electronics. This is the "people's market," a local institution off the tourist trail. Stroll the narrow aisles and savor the sights, sounds, and smells. Bazurto is the gastronomic pulse of the city, where you'll find all the exotic fruits and vegetables that give costeña cuisine its identity. Enjoy a traditional lunch here while your guide introduces you to some of the chefs and purveyors who frequent this local institution.

Your day's adventure continues beyond the historic center, as now you're off to visit two landmarks emblematic of the city's colonial past: La Popa Monastery and Castillo San Felipe de Barajas. Both the monastery and the imposing castle were strategic sites used to defend Cartagena against pirates and invaders. San Felipe was built in 1536 to protect the bay and was once the mightiest fortress in the New World. La Popa sits on a hill in Cartegena and offers panoramic views all the way out to the Boca Grande neighborhood and its glittering skyscrapers.

After this cultural immersion, return to your hotel and unwind in the evening.

After an early breakfast, you'll transfer from your hotel to the pier where you will board a speedboat for an hour trip to the Barú Peninsula. Along the way, you will see Tierra Bomba Island and Boca Chica, ancient forts that once protected Cartagena from hostile invaders.

After arriving at the Rosario Islands, change into your swimwear and head to Playa Azul, a crescent beach with soft white sands hugging the turquoise Caribbean Sea. After enjoying a buffet lunch, you will have time to relax and sunbathe. An optional add-on is to rent a kayak and embark on a two or three-hour paddling excursion before returning to Cartagena in the late afternoon. A car will pick you up at the pier to take you back to your hotel.

It's time to say goodbye to Colombia! After breakfast, enjoy your last moments of Cartagena in a patio café. Or, if you haven't already, explore the bulk of the city on a guided tour. Otherwise, take one last stroll along those cobbled streets.

Enjoy Cartagena's cobbled maze of vividly colorful houses and ancient squares dating from the 16th century. Meander through the colonial neighborhoods of San Diego and Santo Domingo while learning about important historical sites like Saint Philip's Castle. Maybe pay a visit to the Palace of the Inquisition in Plaza de Bolívar, which was once the seat of the Holy Office of the Inquisition and is now a macabre museum.

A representative will meet you at your hotel and drive you to the airport for your return flight home.

In this itinerary, you'll embark on a high-altitude 4-day trek into Los...

Anyone who thinks you can't get to the heart of Cartagena, Colombia in...
Colombia 6-Day Tours & Itineraries

Cartagena has long been Colombia's top tourist destination. This is no...

Cartagena may be best known for its colonial attractions and grand...

Where to Dine in Cartagena: The Best Places to Eat & Drink

Cartagena is one of South America’s most enchanting colonial cities, and...
Best of Cartagena

Best of Cartagena & the Caribbean Coast

You’ll likely hear about Cartagena long before you arrive. While the...

Cartagena has long been Colombia's top tourist destination. This is no...

Cartagena may be best known for its colonial attractions and grand...

Explore the highlights of Colombia on this tour that includes the...