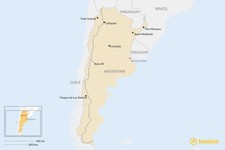 From sophisticated second cities to (nearly) secret wine regions, Argentina is full of great unknowns that are every bit as spectacular as the blockbuster attractions. Beat the crowds with historic Jesuit ruins in Misiones province, visit remote salt deserts studded with brilliant pools, and drive Ruta 40—a wilder version of North America's Route 66, where you won't have to share the road.

If there was anywhere to rival Buenos Aires for culture, it would be the vibrant university city of Córdoba, which surprisingly gets bypassed by most international travelers. After Buenos Aires, most visitors usually want to make their way to the bigger tourist draws of Iguazú Falls, Mendoza, or the far south, but Córdoba boasts enough attractions to keep you in the area for days.

The huge student population has ensured an innovative restaurant and nightlife scene in the city, but student presence has also held Córdoba at the center of revolution and free-thinking for decades. The city was given the accolade of Cultural Capital of the Americas in 2006, with a quartet of grand museums respectively dedicated to emerging, contemporary, fine and classical art. With a UNESCO-listed quarter centered 17th- and 18th-century Jesuit buildings, plus several photogenic churches, Córdoba has its share of history to explore, too.

The surrounding countryside is famed for its estancias: huge country ranches which you can visit for horse-riding, delicious food and some of Argentina's most atmospheric accommodation (see some favorite estancias in this roundup of the Best Unique Lodging Options in Argentina). For a fun hike, climb Cerro Pan de Azucar, 24 miles northwest of Córdoba, and see Argentina's second city from great heights.

With magnificent Incan remnants in the Andes dominating travel itineraries in South America, ruins elsewhere are overlooked, and when travelers hit Argentina most have nature on their minds. Yet the Jesuits founded some 30 missions in the Rio de la Plata basin in the 16th, 17th, and 18th centuries, and these residencies (also called "reductions") can be found throughout the region—many are UNESCO-listed, rivaling the better-known reduction ruins of Paraguay.

If you're visiting the densely-forested Misiones province to visit the mighty (and mighty popular) Iguazú Falls, you can lose 99.9% of the tourists on side trips to San Ignacio Miní, Nuestra Señora de Santa Ana, Santa María la Mayor, and Nuestra Señora de Loreto. San Ignacio Miní is the easiest reduction to visit, located in the town of San Ignacio, 40 miles northeast of Posadas. And Córdoba itself can be your starting point for exploring Jesuit heritage, where six reductions are protected by UNESCO as the Jesuit Block and Estancias of Córdoba.

Most people are aware of Mendoza, Argentina's main wine region: it appears on almost every bottle of Malbec that makes it overseas. But pretty Cafayate, almost 650 miles north of Mendoza in Salta province, has made a name for itself, too. This is the home of the Torrontes grape that makes the majority of the whine wine crop, and there are several bodegas (vineyards) and cellars in Cafayate open for tastings, like Bodega Nanni.

Once you've had your fill, head off on a hike into the Quebrada de Cafayate, a series of sandstone formations and twisting rocky valleys near the vineyards. For more info, check out Wine Regions in Argentina & Chile: Which is Best for You?

Tucked away in the northwestern reaches of Jujuy province, Tolar Grande misses out on tourists due to its remote location and the discontinuation of passenger services on the nearby railway line. But this little settlement, ping-ponged between the jurisdiction of Bolivia, Chile, and Argentina during its existence, holds some of the most startling scenery in the country.

Tolar Grande is situated within the stark plateau of the Puna de Atacama, famous for its bizarre rock formations. However, the landscape's most striking features are the salares, extensive salt deserts which render tracts of the plateau completely white. The white of the salares is contrasted with bright blue saltwater pozas (pools) scattered across it. The most famous of these, known as the Ojos de Mar, are a collection of small but deep, extremely salty bodies of water, the colors of which change dramatically with the light. Little life flourishes within the water except for stromatolites, the oldest-known living organisms on the planet.

The watery world of the Iberá Wetlands in the northeastern Corrientes province is South America's second-most important wetlands after the world-famous Pantanal. It gets relatively few visitors, but this is one of the continent's most important wildlife-watching spots. The impressive array of fauna here includes capybaras, caimans, maned wolves, howler monkeys, and swamp deer, as well as hundreds of bird and reptile species.

A good base for exploration is the Aguapé Lodge on the shores of Laguna Iberá on the south edge of the wetlands. And for more great protected natural areas to visit, see 9 Best National Parks in Argentina.

As all Argentines (and almost no one else) know, Ruta 40 is one of the world's best road trips, right up there with Route 66 in the US or Australia's Great Ocean Road. Few foreigners travel even a section of this 3,100-mile highway, running from La Quaica in Jujuy province to Rio Gallegos in Patagonia. It runs through some of the remotest terrain in Argentina, is barely served by any public transport, and is not always paved. Navigation can be tough, but the rewards are great.

The route, running parallel with and often within close reach of the Andes, passes 20 of the country's national parks, through landscapes from mountains to desert and rock-strewn plains. Ruta 40 also makes a great alternative way to see some of the country's best-loved sights, like Mendoza's vineyards and the Los Glaciares National Park, home to the world's largest advancing glacier.

You can drive a section of Ruta 40 to El Bolson and Esquel on this 16-day itinerary from Buenos Aires to Patagonia.

One of the country's least-known national parks, Parque Nacional Los Alerces hugs the frontier with Chile in a dramatic swath of forests, lakes, and peaks. Far from major towns and tourist centers, the park protects rare Alerce forest: trees that have been living for up to four millennia.

The forests fan out around a group of lakes that form the drainage basin of the wild Futalefú River, and fishing, as well as hiking, is very popular within the park. Unlike Argentina's more famous national parks, you could wander here and not see anyone else for days. Start at Villa Futalaufquen, the park headquarters on the shores of Lago Futalaufquen, where you'll find trailheads and accommodations.

For more ideas, see Going Off the Beaten Path in Argentina.

While many itineraries through the vast country of Argentina focus on...

This thrilling 15-day itinerary takes you to the highlights of Patagonia...

Escape to one of the most beautiful regions in the world, Patagonia!...

Located in the far reaches of South America, Patagonia is famous for its...