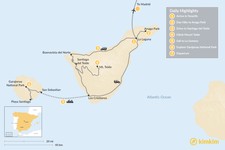 Get lost in the wild beauty of Spain’s Canary Islands on this adventurous 7-day itinerary. Explore ancient forests, rural villages, black sand beaches, and the towering Mount Teide on Tenerife, before journeying to the smaller island of La Gomera to discover lush volcanic landscapes and rich cultural heritage. Your final day takes you back to the mainland where you'll depart from the capital of Madrid.

Welcome to Tenerife, the “Island of Eternal Spring.”

Make no mistake, Tenerife abounds with as much energy and excitement as it does tradition and amazing landscapes.

This morning you'll leave your island paradise behind with a ferry from San Sebastian de La Gomera to Los Cristianos. From there, it's time to say adios to Spain and catch your flight home.

In just a week you can embark on the road-trip of a lifetime from...

In a single week, you can enjoy the road trip of a lifetime.  The...

Get lost in the wild beauty of Spain’s Canary Islands on this...

One week is all you need to embark on the road trip of a lifetime...

In a mere week, you can take a road trip through one of the most...
Spain 7-Day Self-Drive Tours & Itineraries

See the cultural highlights of Spain's most captivating cities on this...
Spain Self-Drive Tours & Itineraries

Get ready for an adventures across two of the incredible Canary Islands:...

In a mere five days, you can enjoy an unforgettable Spanish vacation....
Spain Tours & Itineraries

Spain is best visited in the shoulder season months of late spring (May...

Spain is one of the most popular travel destinations in the world, and...

Though just one country, Spain offers a lot of diversity in terms of...

How to Choose the Best White Villages to Visit in Spain

Southern Spain is known for its charming Pueblos Blancos, "white...

A trip to Spain in January means you’ll have many of this nation’s...
Spain Travel Advice

Discover the wonders of Spain's northern Basque Country with this...

Two weeks in Spain with your family is an ideal length of time for...

Explore some of Spain's biggest and most culturally rich cities through...

B
Barbara B.
California, United States
"We had a wonderful trip to Portugal and Spain! All our accommodations were great and centrally located! All of our tours were wonderful with great and know..." read more
Traveled to Spain as a group in September, 2022
A
Allen L.
Tennessee, United States
"We had an amazing time visiting Madrid, Seville, Granada and Toledo. In each location, we loved having the local guides who provided so much insight into the..." read more
Traveled to Spain as a family in August, 2022
E
Elizabeth D.
Tennessee, United States
"Beatriz was awesome! She planned a wonderful trip in both Spain and Portugal and booked us the absolute best private tour guides for the cities that we visit..." read more
Traveled to Spain as a couple in August, 2022

Holly B.
Texas, United States
"We had such an amazing trip to Spain & France! Marina did an excellent job sending us several different trip plans to choose from with various hotel options ..." read more
Traveled to Spain as a couple in September, 2022

Ricardo R.
Florida, United States
"We had an overall great experience with the places chosen and the guides. We came home with a greater appreciation of the different cultures in the Spanish c..." read more
Traveled to Spain as a couple in August, 2022

Elise V.
North Carolina, United States
"We had a wonderful trip to Spain planned by Yuri! We visited Madrid, Barcelona, and Costa Brava. Starting in Madrid, our favorite places were: Retiro Park an..." read more
Traveled to Spain as a couple in September, 2022

Mary D.
Australia
"We have thoroughly enjoyed our holiday in Spain, expertly organised by Paty and backed up by all the wonderful drivers and guides. The countryside, the citi..." read more
Traveled to Spain as a couple in August, 2022

Herbert A.
Maryland, United States
"The overall experience was 5 stars. Karin’s direct experience and knowledge of Spain provided invaluable information in making decisions about the itinerary..." read more
Traveled to Spain as a group in August, 2022

Sachin P.
California, United States
"From the moment we started planning our trip James was an amazing resource and guide. He set up a fantastic itinerary that included Barcelona, San Sebastian,..." read more
Traveled to Spain as a family in July, 2022

Brenda B.
Texas, United States
"Our favorite guide was Jordi in Barcelona. He was the perfect guide and extremely knowledgeable; providing us history , taking us to a fabulous restaurant fo..." read more
Traveled to Spain as a family in August, 2022
Create your custom-made trip to Spain
Get Started