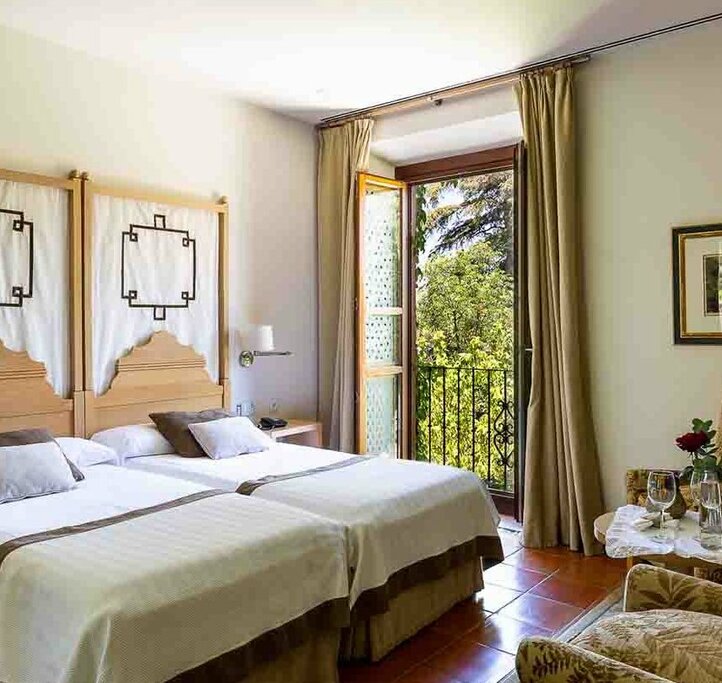 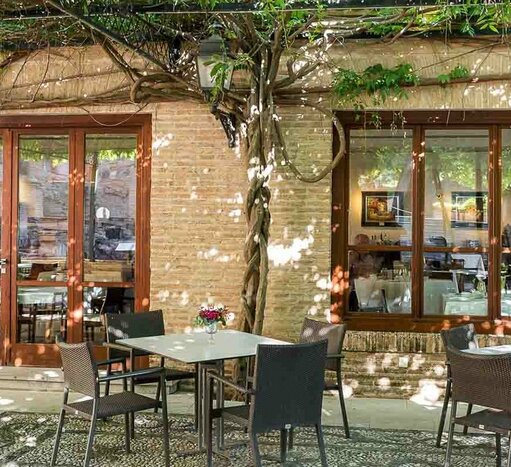 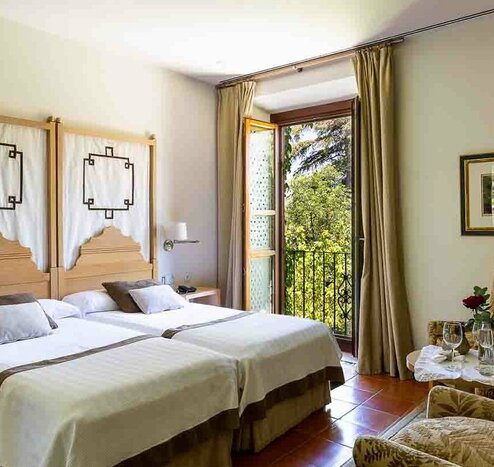 Stay at one of Spain's famous Paradores, a trend of turning historic sites into accommodations. Parador de Granada is in a 15th-century convent on the Alhambra grounds, giving you views of the beautiful palace and its elaborate gardens. Sleep in historic rooms, relax on the sundeck, and dine at the hotel's gourmet restaurant.

It doesn't get much more authentic than staying in a 15th-century convent on the grounds of Granada's Alhambra Palace, built originally by the Nasrid Dynasty, starting in the 13th century. You'll find plenty of reminders of the building's history, including original archways, wood-beamed ceilings, tiled walls, and mosaic walkways.

The Parador de Granada allows you to stay in one of the best-preserved palaces of the Islamic world (with examples of Spanish Renaissance architecture). Next door is Granada's history, so you won't just be visiting it; you'll be sleeping in it! However, keep in mind that the hotel and Alhambra are both about 25 minutes of walking from the city's historic center.

The Parador de Granada offers standard rooms, superior rooms, and suites, all with comfortable seating areas and antique furnishings. Every unit has views of either the Alhambra Palace, gardens, or the surrounding area, though suites take the views to the next level with a wall of windows overlooking the palace. Some have balconies, and all include spacious, modern bathrooms. Though it's a luxury hotel with an incredible ambiance, some rooms feel a little outdated or missing those pieces that truly make a place luxurious.

The restaurant at the Parador de Granada is popular among locals and visitors alike, so booking a table in advance is essential. The eatery's terrace overlooking the Alhambra gardens is its biggest draw, but its refined indoor dining with white-clothed tables and romantic lighting is also a perk. Enjoy a unique menu that elevates traditional recipes, such as salmorejo (Andalusian gazpacho), habas a la granadina (fava beans with artichokes), and piononos (sponge cake rolls topped with cream). You can also enjoy the hotel's authentic inner courtyard and gardens with a sun deck and fountains.

Other hotels in Granada

Hotel Casa 1800 Granada lets you sleep in the most historic part of the...

Palacio de Santa Inés gives you a quiet option in the buzz of the...

It doesn't get more central than La Bella Granada, which opens up to...

Hotel Casa Morisca is an award-winning historic hotel in Granada,...

The Hotel Alhambra Palace isn't in the Alhambra; instead, the creator...

Other hotels in Spain

A boutique hotel and art gallery in one, you'll be surrounded by...

Hotel Regina is at the energetic confluence of the Gothic Quarter,...

You can stay directly on Plaza Mayor at this Pestana hotel, which makes...

Stay in the heart of Ronda, just across the street from the city's...

Meet a local expert for a tour of the Alhambra, the Generalife Gardens,...

Head outside Granada and into the Sierra Nevada Mountains for a guided...

Evening Tour of the Albaicín in Granada

In the evening, when the sun sets and the locals pack the tapas bars,...

The 7 Best Boutique Hotels in Granada

Whether you want to stay right on the city's main boulevard, in the...

The 7 Best Hotels with Alhambra Views in Granada

A trip to Granada allows you to explore the city's most famous site, the...

The 4 Best Standard Hotels with Alhambra Views in Granada

In Granada, the city's most famous site is the Alhambra Palace. If...
Best of Granada

Seville offers the perfect mix of culture, architecture, and gastronomy....
Best of Andalusia

March in Spain is great for those who want the fun without the high...
Spain Travel Advice

The 6 Best Hotels near the Beach in Málaga

A trip to Andalusia can easily turn into a beach-hopping adventure, as...

3 Best Hotels with Pools in Ronda

When traveling in Andalusia, a pool is one of those perks that can make...

The 4 Best Mid-Range Hotels with Pools in Málaga

A pool is a necessity in Málaga, as an afternoon dip is a perfect...

The 3 Best Luxury Hotels with Pools in Málaga

The best luxury hotels with pools in Málaga offer this incredible perk...

The 6 Best Hotels with Pools in Málaga

With Málaga as one of the biggest cities in Spain's Andalusia region,...
Create your custom-made trip to Spain
Get Started