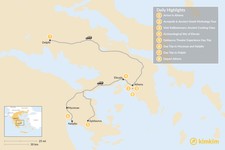 Long dominated by the omnipresent Parthenon, Athens mingles its classical past with a budding art scene and bustling markets. You'll spend eight days exploring this city's many cultural treasures and cool neighborhoods—along with day trips to archaeological sites in nearby Eleusis, Mycenae, and Delphi. See why the epicenter of antiquity and philosophy is well worth a trip today.

Your main activity for today is a visit to archaeological site at Eleusis located just outside of the city of Athens. These ruins were the site of one the most compelling rituals of the ancient world: an initiation ceremony into the cult of Demeter. So little is known about the ritual that it's still referred to as the Eleusinian Mysteries. Explore the site and see what you can find out!

Schedule your guided tour for whenever suits your schedule, whether you prefer to sleep in late or start early, and return to the city for dinner in the evening. Get a taste of the islands at Kriti restaurant, which specializes in Cretan cuisine.

Take the morning to relax and explore the city at your own pace, perhaps lingering over a coffee and Greek yogurt or pastry.

After the play, you'll head back to Athens for the evening.

Start the day early with a full day trip back to a true classic. You may recognize Mycenae from its role in Homer's Iliad: It was home to the famous Helen, whose Mycenean husband King Agamemnon led his people to war when she left him for Paris of Troy. See its Cyclopean walls, whose construction method is still a mystery. They got their name due in part to the belief that only the mythical Cyclops would have been strong enough to lift their boulders.

You'll pass through the Lion Gate to enter the ruins of the city, wandering past the tombs of Aegisthus and Clytaemnestra and the Treasury of Atreus.

You'll go on to Nafplio, one of the prettiest seaport towns in the Peloponnese peninsula and once believed to have been founded by the son of Poseidon. The town was the first capital of the new Greek state after the war of independence in the 1800s. Take a stroll through the old town, where you'll pass statues honoring significant figures from Nafplio's history, Ottoman fountains, and Venetian architecture along the winding streets, topped off by the Bourtzi Castle in the middle of the harbor. Don't miss the climb up 1,000 steps to see the view from the Palamidi Castle.

Today, you'll seek out the oracle during a day trip to the ruins of Delphi, once home to priestesses of Apollo who Ancient Greeks believed could predict the future. Take a guided tour through this sprawling archaeological site, with stops such as the Treasury of the Athenians, the Temple of Apollo, and expansive theater.

Explore the ruins or venture up an ancient footpath once used by worshippers of the god Pan, who started from the temples of Delphi and proceeded to Corycean Grotto for their religious rites, surrounded by the valley of olive trees and views of the Corinthian Gulf and peaks of the Peloponnese on your way.

Don't skip the neighboring museum, which contains masterpieces such as the Bronze Charioteer and the image of the famous athlete Aghias.

Hit three major hotspots on this active eight-day tour of some of...

Katie S.
Ohio, United States
"Dimitris was an excellent help on my first trip to Greece. He booked us in wonderful, cute, small hotels, planned our transfers to perfection and was extrem..." read more
Traveled to Greece as a group in July, 2022
J
Joanna C.
California, United States
"Eleni did a wonderful job providing great lodging, locations, and experiences during our trip to Greece. We had a family of four with two teenagers and got t..." read more
Traveled to Greece as a family in July, 2022