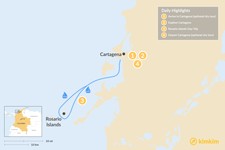 Pair Cartagena's colonial walled city on the northern coast with the nearby Caribbean Islands for the ultimate culture and beach adventure. Start with a tour of Cartagena's colorful streets, lined with palaces, churches, and galleries. Then take a day trip to the Rosario Islands to relax on white-sand beaches. Spend your last night in Cartagena's Old Town, soaking in the fairy-tale romance from one of the city's rooftop bars.

Welcome to Cartagena! This picturesque colonial city on the Caribbean Sea is rich in culture, architecture, romance, and, yes, even pirate history. Upon arrival, you'll be picked up from the airport and transferred to your hotel.

Depending on the time of your arrival, consider a few options. You can relax and enjoy the hotel amenities or jump into action with a neighborhood walk, either by yourself or with an English-speaking guide. No matter which you choose, definitely make time to:

Finish the day on your own with mojitos and fresh ceviche in one of the city’s hip restaurants or rooftop bars, or enjoy the local street food of Getsemani.

After breakfast, take your pick of numerous ways to experience Cartagena, either on your own or with a private tour. Maybe a surfing excursion on the coast, or a day lazing near the Caribbean waters of Playa Blanca, or even a sunset sail with a glass of bubbly.

Other options include a guided walking tour of Cartagena's UNESCO World Heritage walled city. Together with an English-speaking guide, you will delve deep into Cartagena's Spanish-colonial history. You'll visit the city's extensive fortifications and famous fortresses like the Castillo San Felipe de Barajas. Also stroll the city's cobbled plazas, like the Plaza de San Pedro Claver, with its Andalusian-style Cathedral.

If an organized tour isn’t appealing, simply create your own adventure around the city. At dusk, take part in the unforgettable atmosphere as the city comes alive with street performers and musicians.

Rise and shine! After an early breakfast, you will be picked up from your hotel bright and early and transferred to the pier for a speedboat transfer (an hour by boat) towards the Baru Peninsula. Along the way, you will see Tierra Bomba Island and Boca Chica, an ancient fort that once protected Cartagena.

Once you arrive to the Rosario Islands, change into your swimwear before you head to Playa Azul, a stunning white-sand beach on the bright turquoise Caribbean Sea. After a buffet lunch is served, you will have time to relax and sunbathe or to rent a kayak for some paddling before returning to Cartagena in the late afternoon. A car will pick you up at the pier to take you back to your hotel.

It's time to say farewell to Colombia! After breakfast at your hotel, enjoy your last moments of Cartagena in a patio café. Or, if you didn't do the guided tour the previous day, explore the bulk of the city.

Enjoy Cartagena's cobbled maze of vividly colorful houses and ancient squares dating from the 16th century. Meander through the colonial neighborhoods of San Diego and Santo Domingo while learning about important historical sites like St. Philip's Castle. Perhaps pay a visit to the Palace of the Inquisition in Plaza de Bolívar, which was once the seat of the Holy Office of the Inquisition and is now a macabre museum.

If you only visit one place on Colombia's northern coast, make sure it's...

Like pairing a gourmet meal with a fine wine, the best way to complement...

This fun 4-day jaunt spotlights one of Latin America’s most exciting...

If you have an adventurous spirit and a thirst for natural beauty then...

With 10 days, your family can easily combine three or more areas of...
Make The Most of Your Time in Colombia

With the summer tourist crowds gone and not to be seen again until...

You won't find a more festive month in Colombia than December. Everyone...
Colombia Travel Advice

Top 10 Things To Do with Kids in Cartagena

With its colorful street life, intriguing colonial history, and tons of...

Top 10 Things To Do with Kids in Medellín

Medellín is a fabulous place for families with kids—from bicycling in...
Colombia Family Travel

This 4-day excursion into the Amazon will give you a taste  of one of...

On this eight-day excursion, you'll visit Bogotá, the largest city in...

How Many Days Should You Spend in Colombia's Coffee Region?

Colombia is world-renowned for its coffee, and most travelers want to...

How to Get from Minca to Tayrona National Park

The journey from the coffee fields of Minca to the beaches in Tayrona...

The distance between Bogotá and Leticia, the gateway city to the...