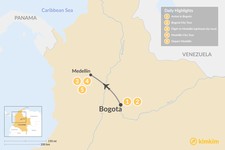 For travelers who love urban energy and metropolitan culture, this six-day jaunt is for you. It highlights two of Latin America’s most exciting cities—Bogotá and Medellín. You'll kick things off in the capital, Bogotá, where you can explore cobbled colonial streets, visit Pre-Columbian museums, and enjoy a thriving nightlife scene. Then, fly to Medellín, a revitalized metropolis best viewed from above—by scenic gondola car. Due to its mid-range altitude, the city enjoys a perpetual spring-like climate, so count on some delicious weather. Then there's all those hip bars and restaurants in the trendy El Poblado district that are begging to be enjoyed. Yes, six days is enough to live it all.

Welcome to Bogotá! A driver will meet you at the airport for transportation to the hotel.

Colombia's biggest city has culture to spare, and its regional gastronomy has made it a global foodie destination. You'll have ample free time to explore this Andean capital on foot. Start with the cobblestone streets of the La Candelaria neighborhood, where trendy restaurants and colonial-era landmarks are located. You'll also find excellent museums, shopping, and street food ranging from empanadas to exotic fruit salads.

Depending on what time you arrive, you can experience Bogotá's local history and culture by taking a tour with an English-speaking guide.

After breakfast, it's time to hit the streets and explore! A local guide will pick you up and accompany you on a half-day walking tour of the city. You'll begin in colorful La Candelaria—the heart of Bogota's historic center. Amble along its narrow streets, visiting cultural landmarks and local shops selling artisanal goods. Eventually, you'll reach Plaza Bolívar, the city's main square dating back to 1539. There's a grand cathedral here as well as many important government buildings, such as the Capitolio Nacional (Colombia's congress building).

To spend a full day with your guide, take the aforementioned walk through La Candelaria and then explore two of Bogotá's best museums in the afternoon: the Gold Museum (closed on Mondays), which features the largest collection of Pre-Columbian gold artifacts in the world, and the Botero Museum (closed on Tuesdays), which houses a collection of masterpieces from renowned Colombian sculptor and painter Fernando Botero.

If you are an early riser, start the morning sunrise tour of Bogotá by visiting its best and biggest food market—Plaza de Mercado de Paloquemao—which supplies produce for many of the city’s best restaurants. Return to La Candelaria and downtown, strolling the streets and stopping to photograph walled graffiti art.

Plan your trip to Colombia
Chat with a local specialist who can help organize your trip.
Get Started

After breakfast, transfer to the airport and hop a flight to Medellín. Despite its turbulent past, Medellín today is quite charming with its beautiful mountain setting, friendly locals, and vibrant culture. A car will pick you up at the airport and transfer you to your hotel. You're now free to spend the remainder of the day exploring.

Start by visiting Parque Lleras, in the heart of the trendy El Poblado district, where most of the city's tourism is centered. This is where some of the best dining, nightlife, and hotels are located. Perhaps take a ride on the city's gondola (Metrocable) system and enjoy the 360° views of the city below. Either way, enjoy the weather—due to its elevation, Medellín has year-round spring temperatures.

After breakfast at your hotel, spend a fun day exploring Medellín on a walking tour with a local guide. This excursion includes a mix of sightseeing by foot and taking the Metro system through a neighborhood that represents one of the city's most successful urban projects.

The guide will pick you up from your hotel and you'll transfer downtown, visiting Plaza Botero, which features works by Colombia's foremost sculptor, Fernando Botero. You'll then take a ride on the city's iconic Metrocable gondola system and enjoy panoramic views of Medellín below. Next, stop in at the Botanical Garden, which features more than 4,500 flowers. After visiting some parks and landmarks in the downtown area, you'll eventually return to your hotel by public transport. (There's also a tour option that includes graffiti street art and riding the Metrocable to more remote neighborhoods higher in the hills.)

The rest of the afternoon and evening is yours to enjoy at your leisure.

After breakfast, you'll transfer from your hotel for a full-day excursion to one of the crown jewels of Colombia's Antioquia region: the lakeside town of Guatapé. This private tour includes a guided walk through the village and a mini-history lesson. You'll learn about the town's conflict surrounding the building of the dam that created the reservoir here, which is known as Guatapé Lake. You'll gain an insider’s perspective on local efforts to pressure the government to address this reservoir’s encroaching blue-green algae.

Your guide will then transfer you to El Peñol (La Piedra Rock). Relax at the base of this natural granite landmark in one of the many market stalls. Or work up an appetite by climbing the 740 steps to admire the view from the top (entrance fee not included). Halfway up the rock, you'll see a shrine to the Virgin Mary.

Return to the town of Guatapé and explore the streets. This is one of the most colorful villages in Colombia, with beautiful artwork along the lower half of its buildings. Head to a restaurant and enjoy lunch on your own (try the freshwater fish and/or other local delicacies). In the late afternoon, you'll transfer back to your hotel in Medellín with free time to enjoy the rest of the day.

It's time to say farewell to Colombia! Enjoy your last moments in the beautiful city of Medellín with a leisurely breakfast, city stroll, and/or souvenir shopping.  A representative will meet you at your hotel and drive you to the airport for your return flight home.

Anyone who thinks you can't get to the heart of Cartagena, Colombia in...

In this itinerary, you'll embark on a high-altitude 4-day trek into Los...
Colombia 6-Day Tours & Itineraries

Bogotá has two faces. It is both a bewildering urban sprawl across a...

Bogotá is home to dozens of locally-owned hotels, many with a boutique...
Best of Bogotá