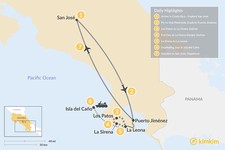 Corcovado National Park, located on Costa Rica's remote Osa Peninsula, is one of the most biodiverse places on earth. It's the perfect spot for jungle exploration, and this six-day itinerary mixes rugged adventure with culture and luxury. It's designed for those who want an off-the-beaten-path nature experience featuring windswept Pacific beaches and trails that meander through virgin rainforest abounding with wildlife.

Welcome to Costa Rica, the land of pura vida! Upon arrival in the capital of San José, a local representative will meet you and escort you to your luxury hotel. The rest of the day you'll have free to explore the city at your own pace. One idea is to visit the Mercado Central (Central Market), which boasts over 200 shops, food stalls, and sodas (traditional restaurants). Then you could visit the Catedral Metropolitana (Metropolitan Church), whose interior combines Greek Orthodox, Neoclassical, and Baroque styles,  and features wood carvings and stained-glass windows.

Be sure to explore Barrio Amón, a historic neighborhood home to cafetalero (coffee grower) mansions built during the late 19th and early 20th centuries. Many of this area’s historic buildings have been converted into hotels, restaurants, and galleries, making Amón a popular bohemian district. For dinner, you might want to opt for a gourmet restaurant in the hills of Escazú. This elevated region on the western edge of the city offers panoramic views of the valley below. No matter where you go, though, the whole city is filled with delectable, high-end restaurants serving everything from traditional local to forward-thinking fusion cuisine.

Today you'll board a flight to Puerto Jiménez, the main transport hub on the secluded Osa Peninsula. It's the perfect base of operations as Jiménez is flanked on the west side by Corcovado National Park and the blue waters of the Golfo Dulce ("Sweet Gulf") to the east. The beaches in this area are remote and many offer excellent surfing. The Golfo Dulce is also a favorite playground for pods of spinner dolphins, so keep an eye out and your camera ready.

You'll have the rest of the day to relax and laze on the beaches until your heart's content. At night, it's time to head out. Don't be intimidated by the remoteness—Puerto Jiménez is one of the largest towns on the Osa Peninsula. It thus offers several gourmet dining options guaranteed to sate your appetite. Many of these restaurants feature world-class seafood and oceanfront tables.

Awake early and enjoy breakfast at your luxury eco-lodge. You'll need the energy, as today you'll be hiking nearly 13 miles (21 km) through the heart of Corcovado. You'll begin at Los Patos Ranger Station, in the northeast of the park, and finish at La Sirena Biological Station in the southwest, where you'll overnight.

Along the way, the trail leads through the protected rainforest, so you'll want to keep a sharp eye out for exotic flora and fauna. You likely won't have to wait long—Corcovado is home to a staggering 5% of the world's biodiversity. Common animals spotted here include monkeys, agoutis, tropical birds, and reptiles. Do be aware of the white-lipped peccaries, as these pig-like animals travel in packs of up to fifty and can be aggressive.

You'll have a full day free to explore the trails in and around La Sirena Station, located in the heart of Corcovado. This is the largest outpost and the main contact point for all visitors to Corcovado National Park due to its proximity to the coast. That means it's accessible by foot, plane, or boat, so you'll likely run into other visitors.

You'll awake early in order to depart for the last station on your Corcovado hike: the La Leona Ranger Station. The coastal trail leading there is 10 miles (16 km) long and follows the scenic coastline along the southern edge of the park. This path takes you through coastal forest and along deserted beaches where you might encounter tapirs, red brocket deer, opossums, and, yes, even pumas. After reaching the station, you will then exit the park and continue a short way to your next lodging, an upscale hotel located right on the beach.

Today, you'll have the pleasure of exploring the waters of the Caño Island Biological Reserve on a scuba diving excursion. This protected marine area is located just off the northern tip of the Osa Peninsula, by Bahia Drake (Drake Bay). The area is home to an abundance of marine life including reef sharks, sea turtles, parrot fish, eels, manta rays, puffer fish, snappers, sea cucumbers, octopus, and many more. There's also a wide variety of coral-building organisms and 19 different species of coral, such as fan, head, and brain coral.

To arrive there, you'll board a 30-foot Island Hopper and an expert will offer a safety lesson geared for all ages and experience levels. Then it's time to plunge into the water. Visibility is 30-100 feet throughout the year, making Caño Island a perfect site for underwater photography.

It's time to say goodbye to Costa Rica! Wake up early and enjoy the sunrise over the beach. It will give you ample time to snap some photos and take a final dip in the ocean. After breakfast, a driver will pick you up from your hotel and transfer you to the airport, where you'll catch a short flight back to the capital of San José. From here, you'll connect to your flight home. Adios!

Family Fun on the Caribbean Side - 7 Days

With your kids in tow, get out and explore Costa Rica's capital city...

Perfect for travelers looking to hike and observe wildlife,...

This 7-day itinerary is perfect for travelers who want a comprehensive...
Costa Rica 7-Day Tours & Itineraries

Whether you're drawn to wellness retreats in lush surroundings,...

This mountain town needs no introduction to those familiar with the...

Epitomizing laid-back travel, Costa Rica has hundreds of hotels but only...

Best of the Osa Peninsula

Best Eco-lodges in the Osa Peninsula

The Osa Peninsula is one of the most remote areas in Costa Rica. In...

C
Cosette M.
Indiana, United States
"This is my first time using KimKim. I was a little hesitant at first, but once I filled out the questionnaire and got matched with Green World Travel, we wer..." read more
Traveled to Costa Rica as a group in September, 2021
S
Shawn G.
Ohio, United States
"Adriana planned a GREAT honeymoon for us. She took our input and even gave us some recommendations of sights to see around Costa Rica. We will be recommendin..." read more
Traveled to Costa Rica as a couple in September, 2021

Alex V.
Washington, United States
"Randall created an amazing trip for us! COVID delayed our honeymoon last year, so this year was a make up honeymoon. I had a million questions and Randall wa..." read more
Traveled to Costa Rica as a couple in August, 2021
Create your custom-made trip to Costa Rica
Get Started