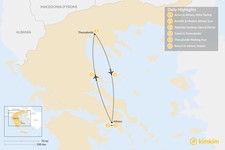 Spend six days seeing the sights of Athens and Thessaloniki with this exciting itinerary. Begin in the capital, where you'll be welcomed with a local wine tasting, followed by a jaunt around the Acropolis. You'll tour the city's young, vibrant neighborhoods and markets, and learn to cook a traditional meal as you look out at the Athenian skyline. Then fly north to Greece's second city, where you can appreciate its fascinating architecture on a walking tour of all the hot spots.

In the evening, you'll sit down to drink to your upcoming adventure with a wine tasting in a bar in downtown Athens.

Span the centuries of the city on today's guided tour. Over the course of about seven hours, you'll cover thousands of years, starting with a review of the Acropolis and Agora, where you'll learn the history, philosophy, and politics of ancient Athens.

Jump forward to the present, where Athenian art, style, and cuisine are being reborn amid their traditional influences. You'll see the colorful flea markets of Monastiraki, along with the street art, design, and vintage clothing stores of Psyrri.

Get a taste of those traditional influences as you venture into the Varvakios Market, the largest and most popular fish, meat, and vegetable market in the city, and explore the city's main spice street. You'll sample olive oils, honey, cheeses from around the country, cured meats, olives, and more. End in the Plaka district, one of Athens' oldest neighborhoods, where souvenir shops balance with local life. You'll cap off the experience with lunch in a traditional taverna at the foot of the Acropolis.

If you haven't had your fill of adventuring during the afternoon, spend your evening in the Koukaki neighborhood. This area's off-the-beaten-path wine bars will introduce you to a wide selection of Greek wines amid friendly crowds.

Spend your morning as you like — perhaps strolling the cobblestoned streets of charming Plaka, the neighborhood next to the Acropolis. Get a taste of Greek life as you wander the colorful lanes lined with shops and quaint cafes.

Don't fill up on too much food, because this afternoon it's time to learn how to make it yourself.  You'll visit a contemporary multi-use space home to four shops in one—a coffee house, pie shop, creamery, and kitchenette—and the perfect setting for your lesson. Discover local products from around Greece and experiment with traditional recipes to create your own twist on the classics. And, of course, sample all of it.  Savor the fruits of your labor on the rooftop while taking in views of the Acropolis and surrounding Plaka.

The evening is yours to explore as you will. Maybe the vibrant streets and shopping of Monastiraki are calling your name, or the cocktail bars of bohemian Psyrri are more your style.

Take a quick flight to history-rich Thessaloniki in the north.

The day is yours to explore with a self-guided walking tour, so you can pick and choose based on your interests and time of arrival. You'll start with history, scoping out the UNESCO World Heritage-listed Byzantine churches and the Roman agora, which hosted traders from around the Mediterranean for thousands of years.

Continue to the modern food and flower markets amid the riots of color and flavor on view. Don't miss the opportunity to sample the bougatsa, a typical semolina-based dessert. Keep going on to the crypt of Saint Dimitrios, a subterranean space recently discovered below the church. You'll learn about the range of cultures that have shaped Thessaloniki as you go, including Ottomans, Christians, and Jews.

End your trip at the top of the White Tower. This fifteenth-century structure is one of the city's most famous landmarks and its unofficial symbol, and is home to both a history museum and views across the water.

Today you'll explore Thessaloniki's many sights on foot. Start your tour at the top of the mid-century modern OTE Tower in the Thessaloniki International Exhibition Center, one of the city's most recognizable landmarks. From here you'll enjoy 360-degree panoramic views of the city while your guide explains its historical background. You'll also have a chance to sip on traditional Greek coffee and nibble on some snacks before continuing on.

Head down towards the Ottoman-era White Tower on the waterfront, where your guide will share tales of its gruesome history. Next, you'll make your way to the ruins of the 4th-century Galerius Palace at the heart of the city. You'll explore the throne room, the atrium, the basilica, and the Arch of Galerius. Continue on to the impressive Rotunda, which is said to be the best-preserved pantheon outside of Rome. A close look at the walls will reveal spectacular mosaic work.

Finally, you'll visit the Byzantine Church of St. Panteleimon and the tiny Church of the Savior, which is also called the Chapel of the Transfiguration of Christ, where you'll learn about their historical significance to Thessaloniki.

Spend your evening at your own pace.

Fall in love with the largest Greek isle with the 6-day version of this...

In just under a week, you'll see some of northern Greece's most...
Greece 6-Day Tours & Itineraries