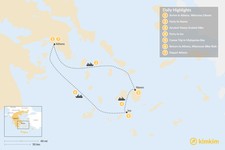 This week-long itinerary through the Cyclades will take you to some of the most beautiful sites on Naxos and Ios. In between wandering the lanes of the charming main towns and lounging on the beaches, you'll trek through the hills to ancient sites and paddle over Aegean waves on a canoe safari. Back in Athens, take to the streets on a bike tour of sights both old and new to wrap up your Greek adventure.

After breakfast, head to the village of Myli, where you'll pick up an old footpath that leads to the island's ancient aqueduct. Hike up to the nearby quarry, where you'll find two large kouros, unfinished statues of ancient Greek gods, lying on the ground. Originally intended to hold up a temple roof, these giant statues were abandoned by their ancient sculptors when they discovered faults in the marble, but they're no less impressive for that today.

Pass the statues along with olive groves, orchards, and a shady riverside. You'll visit the Catholic church of Theoskepasti, also known as Agios Mamas, the island's oldest chapel, along with Episkopi, the summer residence of the Catholic archbishop, on this 2.5-hour guided hike.

Stop in Mesi Potamia on your way back to town to take a break at a taverna under the trees on the river bank. Spend your afternoon exploring the town along with its neighboring riverside settlements at Ano Potamia and Kato Potamia, connected by a walking path, or return to town for a well-deserved beach break.

Your next island awaits after breakfast! Ferry over to Ios, where lazy afternoons on the beach ease into a booming nighttime scene, with nightlife venues to suit your every possible interest.

Mylopotas beach is the most popular choice for daytime, with its proximity to town and plentiful facilities. If you're in search of solitude, head out to the farther Manganari beach, a secluded, shallow bay known as one of the most scenic beaches on the island with its dark golden sands.

In the evenings, don't miss Far Out Village at the far end of Mylopotas, a four-part beach club, campground, hotel, and spa, and one of the biggest hotspots on the island. It's the perfect place to meet some new friends and see where the evening goes.

Set out across the surf in Mylopotas Bay. This half-day canoe trip departs from Mylopotas beach and will take you out to a cove and flat rocks perfect for catching some sun as you make your way across the waters of the bay. Enjoy a barbecue lunch that you can choose to share with the local moray eel and try out scuba diving with a trained instructor, or stick to swimming and snorkeling.

From there, paddle out to Kolistani beach, which is only accessible by sea. You'll have plenty of time to continue your frolicking on its sands before you paddle back.

Return to Athens in the morning.

Greet the city with a bike ride accessible to riders of all levels. You'll wheel past many of the highlights of the city over the course of three hours, complete with a coffee break at a cafe and ideal golden hour lighting for the perfect snapshot.

Your guide will tell you about all the spots you pass, starting with a spin through the National Gardens and a stop to watch the famous changing of the guards at the Parliament. You'll pass the Panathenaic Stadium and Zappeion exhibition hall next, followed by the Greek and Roman agora and ancient cemetery of Keramikos. The new Acropolis museum is along the route as well, accompanied by views of the Parthenon, Plaka neighborhood, and Cycladic architecture of Anafiotika.

You may have to walk your bike at some points, but it's all accompanied by insider tips on the best spots to eat and drink in Athens and plenty of breaks to take in the views.

This itinerary was selected among Europe's best 7 day trips.

Tiny Mykonos can be crisscrossed by car in about 25 minutes, but that...
Best of the Cycladic Islands