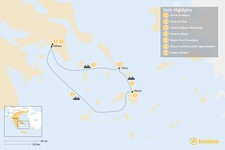 Recline for a week in the less crowded parts of the sunny Cyclades with this seven-day itinerary. You'll start and end in Athens, visiting Tinos and Naxos in between. Tinos is home to time-honored basket-weaving methods and marble quarries that will take you back to the Classical era, while neighboring Naxos boasts an extensive agricultural scene and Venetian castle district ready to be wandered.

Take an early ferry to Tinos, one of the most overlooked islands of the Cyclades. Tinos has remained under the radar for many years, overshadowed by its celebrity neighbor of Mykonos and seen mainly as a religious destination. Those who continue to believe that, however, are missing out on an island with fascinating history and culture, winding streets, great outdoor activities, and glittering beaches.

The imposing Panagia Evangelistria should not be overlooked, as Tinos is also known as the island of the Virgin Mary. Its icon is believed to have healing powers, and the annual August pilgrimage is a key part of the island's identity as churchgoers crawl on their knees toward the temple as a sign of piety.

If pilgrimage isn't quite your scene, there are also nearly 80 windmills to be explored, Venetian ruins, hiking at Exomvourgo mountain, and beaches for any moods. Try the island's craft beer from Nissos brewery or sample the cheeses at the shop belonging to the Cheese Cooperative of Tinos. Keep an eye out for the many painted dovecotes around the island as well, small white pigeon homes dotting the countryside of which there are nearly 1,000.

Visit an aromatic garden and harvest fresh ingredients as part of this culinary experience. You'll learn the stories of some Greek recipes, then cook them yourself with expert instruction. Enjoy the fruits of your labor al fresco, as you consume your creations under the trees and arched alleyways accompanied with local wines and the scent of the herb garden.

Spend your evening in the main Tinos town and take advantage of the many cafes and tavernas along the seaside or in the interior. Complete your island culinary education with louza, a cured pork that's been refined by Tinians over years of practice, and rich volaki cheese balls and kariki cheese aged within pumpkin skins, similar to a stilton or roquefort. See if the menus offer fourtalia, a fresh Cycladic dish similar to an omelette made with fresh local eggs, sausage, and potatoes, or dishes made out of the signature Tinian artichokes. Complement them with a glass of crisp, light Tinian wine or Nissos beer brewed right on the island.

Taste some of the trademarks of the island known for having some of the best local produce in the Cyclades.  Your guide will take you around the island to towns like Kindaros, Kaloxylos, Chalki, and the marble town of Apeiranthos, as well as the main Naxos town.

You'll meet with local producers to sample and even create some of the island's better-known dishes, such as loukoumades fried donuts, keftedes meatballs with tzatziki sauce and Naxian cheeses, and a cheese or olive pie picnic with coffee, juice, bread, fruit, and yogurt. You'll also sample the local kitron liqueur at a distillery before you top off the afternoon with a tour of the Venetian castle in the main town.

Spend your evening wandering the streets of town in search of your perfect aperitif spot. Or, put your new food-spotting skills to use in the tavernas.

Return to Athens in the morning. After you've settled back into the city, you'll be transferred down to the Athenian Riviera, full of both history and stunning island views. Your adventure will take you along the coast to visit the Temple of Poseidon, while being provided with historical background on the way. The views overlook the Saronic Gulf, with one of the best sunset views Greece has to offer. Sip a complimentary beverage and take in the sunset while you listen to music and immortalize the moment with a Polaroid-style photo.

You'll be transferred back to your lodging in the evening just in time for a late (Greek-style) dinner. Or, if you're not ready to call it a night, you can request a drop-off at some of the most popular beach bars to dance until the sun comes up.

Hike, bike, and paddle your way around the Cyclades with this exciting...

Recline for a week in the less crowded parts of the sunny Cyclades with...
Best of Tinos