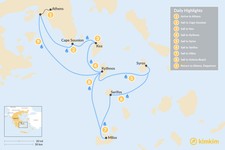 Channel the spirit of some of Greece's most famous tales as you sail through the Aegean on this nine-day itinerary. Start off by paying the proper tribute at the Temple of Poseidon before you start on your way to Kea, followed by the villages of Kythnos. Visit the capital of the Cyclades on Syros and the home of the Cyclops on Serifos, then search for the Venus de Milo's cousin on Milos before you end your trip on the double beach of Kolona.

Day 2: Sail to Cape Sounion and the Temple of Poseidon

Board your boat this morning and make yourself at home. Once you've settled in, you'll head down to the Athenian Riviera, full of both history and stunning island views.

Your adventure will take you along the coast to visit the Temple of Poseidon, providing you with historical background on the way. The cliffs overlook the Saronic Gulf, with one of the best sunset views Greece has to offer and seven islands to spot in the distance.  Keep an eye on the Doric columns, where Lord Byron once carved his name.

Set sail today for the island of Kea, also known as Tzia and the closest Cycladic island to Athens, potentially stopping at the protected harbor and town of Vourkari or swimming at a more remote beach along the way.  You'll approach from the west to the port of Korissia and main town of Ioulis.

Visit the archaeological museum and nearby carved stone Lion of Kea or walk along the island's many marked hiking trails through the hills or royal oak forest. You can also visit Karthea Bay, a point only accessible by boat or hike and home to ancient temples to Apollo and Athena.

The western Cycladic island of Kythnos is home to one of the oldest settlements in the Cyclades, dating all the way back to roughly 10,000 BCE. You'll spend today visiting its five main villages of Merichas, Chora (also known as Messaria), Dryopida, Loutra, and Kanala.

It's now home to Greece's first wind park and an increasingly sustainability-focused infrastructure. Take a dip in Loutra's thermal springs, walk through Messaria's labyrinthine streets, or visit some of the country's largest caves at the Katafiki Cave in Dryopida.

Head to Syros today, home to the capital of the Cyclades. You'll be greeted by the domes of the Greek Orthodox and Catholic churches atop the hills of Ano Syros and Ermoupoli, churches that join together for yearly Easter celebrations.

Follow the cobblestone streets through the squares and past architectural features like the Ermoupoli City Hall designed by Ernst Ziller, also responsible for many of the mansions and national buildings in Athens. Visit the Vaporia neighborhood, home to the mansions of 1800s sea captains, or the medieval hilltop settlement of Ano Syros for expansive sea views. The yearly music festival attracts visitors from around the country to the Apollon theater, built in 1864 as a replica of La Scala in Milan.

In Greek mythology, Serifos was the island where the infant Perseus and his mother washed up from the sea and later returned after killing Medusa. It was used as a place of exile during the imperial Roman era, but now is sought out by those who are considerably more enthusiastic about making the trip there.

Visit the undeveloped beaches, hike up to what's left of the hilltop Venetian fortress, or explore the sites of former mines and caves once thought to be home to the Cyclops. Top off your day at one of the tavernas on the shore of the main town.

Milos is rumored to be the next Greek luxury destination, boasting more than 70 crystal clear beaches and stunning sunsets. It's also home to a dormant volcano at Kalamos, one of the island's oldest volcanic centers. The volcanic steam and gases emitted into the atmosphere reach temperatures of 100 degrees Celsius.

The Venus de Milo statue was discovered on Milos, so scope out its historic catacombs and amphitheater or extensive network of dirt roads and see what you can find for yourself.

Circle back to the other side of Kythnos to the double-bay beaches of Kolona, considered some of the prettiest in the Aegean. The narrow strip of sand connects the main island to the Agios Loukas islet, surrounded on all sides by clear water.

Take a loop hike up to the hilltop to take in the view from above or simply spend the day on the sand. There are few umbrellas or organized facilities on the beach, which can be crowded during the high season, so be sure to travel prepared.

Cruise like a celebrity through the glittering waters of the Cyclades on...

Sailing Holiday in the Aegean - 9 Days

Channel the spirit of some of Greece's most famous tales as you sail...

Spend nine days getting your sea legs with this sailing itinerary. Once...

Cruise like a celebrity through the glittering waters of the Cyclades on...

Sailing Holiday in the Aegean - 9 Days

Channel the spirit of some of Greece's most famous tales as you sail...
Greece Sailing Trips & Itineraries

Best Things to Do in the Greek Islands

Although most are uninhabited, Greece has over 6,000 islands dotting the...

The Best Boutique Hotels in Syros

Many of the colorful sea captain's houses that dot the Syros waterfront...

Gastronomy and Culture of the Cyclades - 12 Days

Take 12 days to explore some of the lesser-known islands of the...
Best of Syros

Best Things to Do in the Greek Islands

Although most are uninhabited, Greece has over 6,000 islands dotting the...

The 5 Best Boutique Hotels in Milos

With bright white interiors and accents from land and sea, the hotels of...

This 11-day tour introduces you to three of Greece's most dazzling...

The beautiful Cyclades consist of hundreds of islands. You'll get to...
Best of Milos