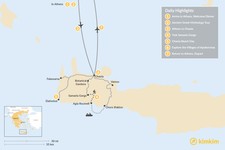 Spend a week with your family exploring Greece's largest island on this 7-day itinerary. After a start up on the Athens Acropolis, you'll head to Crete to experience the depths of the Samaria Gorge, sunny shores of Chania's beaches, and traditional stone villages of Apokoronas with tales to keep everyone interested.

Make your way over to explore the Acropolis Museum on your own after your tour (or join a guide if you'd prefer). Named one of the ten best museums in the world by National Geographic, this modern museum houses a multitude of artifacts removed from the hill of the Acropolis for safekeeping to provide insight into ancient religious practices and daily life. Linger for lunch in the museum's cafe, with views of the artifacts' former hilltop home.

As night falls, you may be able to visit the Athens Observatory to learn about the constellations overhead and take a look through the telescope. Its hours vary seasonally and by day of the week.

Your short flight today will take you to Crete, the largest and most populous of the 230 inhabited Greek islands. Upon arrival to Chania, a city (and region) on the northwest coast, you'll be transferred to your hotel as you get ready to explore this stunning island, equipped with tips from your local specialist.

Chania itself will be the main base of your operations during your trip. It's the second largest city in Crete and one of the most scenic spots on an island with stiff competition for that title. Life in this former Venetian city revolves around its charming 14th-century harbor, narrow streets with winding alleys, and colorful architecture influenced by past Ottoman and Egyptian eras.

Depending on what time you arrive, wander around town or head for one of the western region's spectacular beaches such as Falassarna and Elafonissi. There are also plenty of deserted coves and quiet bays to enjoy total privacy.

For dinner, wander around Chania's harbor and check out a slew of waterfront restaurants with a sunset view.

After breakfast, you'll be picked up at your hotel nice and early to explore one of Crete's natural wonders. Set amidst the scenery of the White Mountains is the popular hike through Samaria Gorge. The trek takes approximately five hours to cover the gorge's approximately 11 miles (18 km), most of which are downhill and during which you'll spot flora and fauna of all kinds. As your trail nears its end, you'll descend a gentle slope down to the peaceful beach at Agia Roumeli on the turquoise Libyan Sea where you can take a dip and wash off the trail dust.

There will be time to linger on the sand and relax before you wrap up the outing with a boat trip to Chora Sfakion, where your coach will be waiting to return you to your hotel in Chania.

Spend a free day exploring the beaches around Chania. Some of your options include:

Day 6: Explore the Villages of Apokoronas

Today, you'll have a chance to hear some of the island's history firsthand during a guided tour through nearby Apokoronas. The region's villages—seven of them—are home to a number of sites including an Ottoman fort, historic churches, and a folklore museum. But most interesting will be the conversations you and your guide will have with the local residents of the area.

Some potential highlights include:

In the evening, check out Chania's waterfront districts of Halepa and Tabakaria. Wander among former tanneries and factories in these off-the-beaten-track parts of town, just past the end of the main promenade.

It's time to say farewell to Crete with one final breakfast in Chania. Take a sunrise stroll along the harbor or perhaps indulge in one more scoop of graviera cheese before you're transferred to the airport for your departure.

The ancient Minoan civilization on Crete was one of the first to create...
Greece Family Travel

Best Things to Do on Crete

As Greece's southernmost and largest island, Crete puts a twist on the...

Dive deep into the Cretan lifestyle—specifically the far west region of...
Best of Chania

Greek gastronomy is known worldwide as one of the freshest and...
Best of Crete

Travelers often dream of a trip to “the Greek isles,” but as the country...
Greece Travel Advice

Planning Your Perfect Honeymoon in Greece

Greece is one of the most irresistible honeymoon getaways on Earth....

What to Eat in Crete

Born out of centuries-old traditions, Cretan cuisine is simple and...

Best Places to Eat in Rethymno

Charming Rethymno has more to offer than beautiful beaches and a...

I
Irina K.
Indiana, United States
"Harris was very knowledgeable and easy to work with. He responded quickly to our messages. We are very happy that Harris recommended Naxos for our trip! We h..." read more
Traveled to Greece as a couple in September, 2021