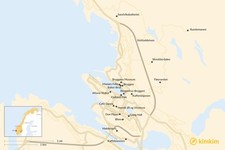 How many cities can you name that sit along a fjord, in the mountains, surrounded by islands? If you've been to Bergen, your answer is probably one. It's a microcosm of all of Norway's best scenery with a dash of both traditional and contemporary culture. The city, though world-class, has humble, unpretentious roots—and the only way to do it is like a local.

Once the former capital, Bergen offers an incredibly different slice of Norway even from Oslo—while still offering the metropolitan buzz that comes with being the country's second-largest city. The pace is slightly slower, the nature more dramatic and immediate, and while farther north, the weather is much the same (if a bit rainier). Move past the obvious and do this world-class city as the locals do.

Most tourists stand outside Bryggen—those colorful houses on the harbor that line nearly every Bergen postcard—snap a few photos, and call it a day. Instead, start at this UNESCO World Heritage Site, sure, and then meander up the small, narrow streets behind the old merchant houses. Find the trailhead marked Skredderdalen (look for a building that says "Bergens Vandverk 1914"), and continue walking. While all the other tourists are walking up Mt. Fløyen, this is more of a local's route. It'll take you to Fløyvarden, where you can catch some stunning views and then head back down via Fløyen's route or the lovingly named "tippe tue," a smaller, less-direct path.

Alternatively, but also starting at Bryggen, follow the small, narrow streets up the mountainside to Sandviksbatteriet. Apart from impressive views (you'll quickly learn that there's rarely a spot in Bergen that isn't impressive), this path takes you to a small, hidden cabin that was once part of a fortress system. When you get there, see if you can find marks from World War II.

Back downtown and close to the city's center, keep an eye out for street art—this is the modern movement's Norwegian capital. The most obvious ones you'll run across are probably by Dolk, a famous artist from Bergen. In Sentralbadet, there's a legal graffiti wall, too, and it's constantly morphing.

When it comes to museums, art, and entertainment, Bergen has a laundry list of options. Check out Grieg Hall to catch a performance of the Bergen Philharmonic Orchestra or head to Den Nationale Scene, Bergen's main theatre (Ibsen was once an in-house playwright here). The Bryggens Museum is a bit more off the beaten path than the Hanseatic Museum, and it offers a fascinating look into Bergen's, Norway's, and human history. Café Opera and Madam Felle have live music every weekend, the latter specializing in jazz. And while downtown certainly is the heart of Bergen, the Møhlenpris neighborhood, near the university, is an up-and-coming area of cafés and restaurants worthy of exploring.

The Norwegian diet, once largely made up of dried and salted fish, wasn't always something to write home about—but nowadays, it's quite the opposite. New Nordic cuisine is taking the country by storm, and the options you'll find in Bergen are virtually limitless (international and otherwise). And remember: this is a university town. 17,000 students from all over the globe make their impact on Bergen daily.

Locals love their coffee. Swing by one of Bergen's best, like Kaffebrenneri, Blom, or Kaffemisjonen, and order something simple. And if you're wandering around Bryggen and wondering what that heavenly scent is, it's Baker Brun—grab a skillingsboller for the road (a traditional Norwegian pastry, similar to a cinnamon roll, but less sticky).

For larger meals, that depends on what kind of traveler you are and what kind of budget you have. Stop by harbor-adjacent Fjellskål Fisk & Skalldyr and peruse the fish, cheeses, jams, and local specialties—they have sandwiches and wraps and easy-to-go fare, too (take it to the university-adjacent Nygårdspark for a picnic). Otherwise, for Nordic and "New Nordic" cuisine, try out the much-acclaimed Lysverket, Colonialen, or Enhjorningen, one of the oldest restaurants in the city.

And onto the drinks: Altona Vinbar is the oldest tavern in the city (dating to the 1600s), and Don Pippo has a fabulous selection of wine. When it comes to beer, the craft movement has been slow to grow in Norway, but it's definitely catching on. Bergenhus Bryggeri was the first brewery in Bergen, and Henrik Øl og Vinstove has dozens of options on tap. Norway does have notoriously high alcohol prices, so if you're on a shoestring, consider buying your drinks at corner shops and supermarkets. Don't leave without trying aquavit—most every bar will carry this strong Scandinavian spirit.

Keep in mind that Norwegians tend to eat and stay out late, especially during summer when the midnight sun reigns supreme. If you wander into a bar at 11 pm and no one is there, rest assured that they will come. What's more, if you're hungry, tapas restaurants dot the city and can tide over any growing appetite.

Bergen is the "city of seven mountains," so your feet certainly don't have to rest here. Most tourists will be flocking to Mt. Fløyen or Mt. Ulriken, both with funiculars. Instead, take bus no.12 at Festplassen to Montana, where the local trail starts. You'll climb Mt. Ulriken the hard way (that is, not sitting in a cable car) and continue to walk the Vidden Trail over to Mt. Fløyen. Should you have time, you could also hike over to Mt. Rundemannen, which would already knock off three of the city's seven peaks.

For a more challenging hike, consider Stoltzekleiven. It's nearly 800 stone steps, but that 1,000-foot (300-m) elevation gain gets you absolutely superb views over the city and harbor. The trail was originally built by Sherpas from Nepal, and you're more likely to encounter locals running it than tourists (the record to reach the top stands at about seven minutes!). For the record, this trail also connects to Fløyen and Ulriken, passing lakes and woods. If you're hiking in Bergen, be sure to layer up!

It's not a bad idea to get the Bergen Card, which will make public transport—the city has a good system—a breeze (and, more importantly, free). The buses and light rail are simple to figure out, and nearly everyone speaks English. Though not quite "like a local," tickets and information can be bought and had at the tourist information center next to Fisketorget in downtown Bergen.

That being said, Bergen is compact, and you owe it to yourself to explore it on foot. Wander the narrow streets, spontaneously check out that cozy hole-in-the-wall you've been eyeing, and take that trail that leads up the hillside. It's what a local would do.

Experience an adrenaline rush on the Flåm Zip Line, the longest zip line...

If you're in Bergen, you can easily explore some of the region’s best...

Visit the Museums of Bergen

How many cities can you name that sit along a fjord, in the mountains,...

It may still be the little sister city to more grown-up Oslo, but Bergen...

Laid back, charming, and full of students, Bergen is a great city for...

Bergen is an incredibly family-friendly destination, with no shortage of...

Norway has a unique culture, influenced by its centuries-old history and...
Best of Bergen

Norway's stunning coastline should not be skipped despite the cold and...

Visiting Norway's beautiful fjords in March will bring a touch of spring...

Spring has arrived in Norway’s fjords with melting ice, rushing...

Norway's Fjords in May: Travel Tips, Weather, and More

May is a remarkable month for visiting Norway's fjords. Sandwiched...
Best of Norway's Fjords Region

What to Eat in Norway (and Where to Eat It)

You've probably heard of New Nordic cuisine, but that's only the tip of...
Norway Travel Advice

Chasing the Northern Lights in Norway's Arctic in Winter ...

This fast-paced—and very active—winter tour in Norway is not for the...

Travel by train, hike mountains, boat along a fjord, and mountain bike...

This 15-day Norway road trip explores the most beautiful fjords,...

This active tour is excellent for travelers seeking to experience...

Linda C.
Georgia, United States
"Christina helped us with planning our trip every step of the way. She was fantastic!! I told her when we would be there and what we wanted to do (in genera..." read more
Traveled to Norway as a couple in November, 2022