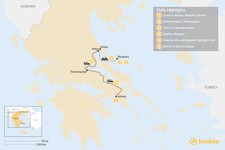 Take a chance on this six-day Greek itinerary and get to know the  country better. You'll start by going from Athens to seaside Volos and Mount Pelion, then sail to Skopelos island where Mamma Mia was filmed for three days of beaches and a location tour before you fly, like the pretty birds, back to your home.

Hit the road early today to continue your journey. Your first stop is Thermopylae, where Leonidas of Sparta battled the Persian army in 480 BCE.  It's now transitioned to a more relaxing way of life, taking its name's translation of "hot gates" a bit more literally for its therapeutic sulphur hot springs.

Continue to the coastal city of Volos and take in both the sea and mountain views as you stroll along the city streets and pedestrian waterfront path. Volos's central port once tied together trade from Europe, the Middle East, and Asia, an influence you can still see as you walk through its squares. Stop in one of the tsipouradika to sample the local alcoholic specialty of tsipouro, a dstilled brandy made from wine press pomace, and its accompanying mezze small plates.

You'll also visit the green landscapes and stone villages of Mount Pelion. You'll start with the area's traditional villages, including Makrynitsa, Vyzita, and Milies, home to a famous traditional local train on the Pelion narrow-gauge railway. You'll then continue on to Tsagarada and Agios Ioannis on the Aegean coast.

In addition to its scenery, Mount Pelion is also known for being the mythological home of the centaurs, creatures who were half-human, half-horse. Keep an eye out in the greenery and you never know what you might spot.

Set sail for Skopelos in the Sporades island group today. Legend has it the island was founded by Peparethos, son of the god of wine Dionysus, and Ariadne, princess of Crete. In antiquity it was known for its wines; now it's better known as the filming location for Mamma Mia. Either way, revelry awaits.

Skopelos town is the island's capital, seated on a hill on the northern coast. With its medieval castle, stone houses, narrow streets, and Byzantine churches, the town encapsulates what it means to be a typical Greek island community.

In addition to its main town, Skopelos is also home to three other main settlements.

Traditional Glóssa is the second biggest settlement on the island, also known as "the tall village” according to the poet Papadiamantis—probably due to the many ruins of ancient towers discovered in the area. It is distinctive for its traditional, noble character and the ruins of ancient towers and buildings that have been discovered around the area.

Nearby Palió Klíma is also known for being especially picturesque, despite the damage it suffered during the earthquake of 1965. Néo Klíma, also known as Élios, is a newer town, built in just 1981 below the forest of Vathias and near Hovolos beach.

Today's six-hour guided tour will take you around to all the island highlights, with a special focus on the ones that brought Skopelos onto the big screen in Mamma Mia.

You'll start at the Agios Ioannis chapel, where the film's wedding scene was filmed. Hike up all 199 steps to get to the top or just relax on top of the nearby rocks and take in the views.

Stop at an olive press in Glossa village to learn about Skopelos olive oils as you make your way to Kastani beach. At the beach, you'll hear more about the filming on the island as you relax in a beach bar on the sands where 10 days of filming took place and have the chance to hop in the water.

Your next stop is Agnontas beach, for more swimming or lunch in a beach taverna. Then head back to Skopelos town, but make sure you keep an eye out for Cape Amarandos and its signature three trees protruding into the water on the way.

Does your vacation truly count if you don't get at least three months of...
Greece 6-Day Tours & Itineraries

Katie S.
Ohio, United States
"Dimitris was an excellent help on my first trip to Greece. He booked us in wonderful, cute, small hotels, planned our transfers to perfection and was extrem..." read more
Traveled to Greece as a group in July, 2022
J
Joanna C.
California, United States
"Eleni did a wonderful job providing great lodging, locations, and experiences during our trip to Greece. We had a family of four with two teenagers and got t..." read more
Traveled to Greece as a family in July, 2022