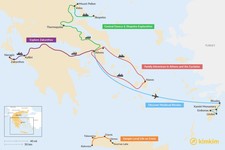 The Greek Islands may number in the hundreds, but with less than a week, it’s possible to sample a variety of isles and experiences. You can rummage among the medieval ruins of Rhodes, immerse yourself in the local lifestyle and cuisine of Crete, or visit the filming locations of the movie Mamma Mia on Skopelos. Let this diverse collection of 5-day itineraries inspire you.

If you truly want a slice of local life, this short cultural itinerary is for you. You’ll wine and dine your way around the island, savoring its quintessential dishes while meeting and mingling with locals at markets, taverns, and off-beat sites, and while hiking to ancient villages.

Start with two days exploring Chania, including the Minoan ruins of Kydonia plus the Municipal Market, mingling with and dining on the waterfront with the locals, and time for such spectacular beaches as Falassarna and Elafonissi. Then head to the time-worn village of Vamos to get a taste for local food production and preparation. A resident cook will teach you some of the island’s secret recipes and help you prepare a feast. Next, drive to Kournas Lake—a popular cooling-off spot for locals—with night at a traditional guesthouse.

There are few islands better suited for culture vultures than Rhodes. This five-day itinerary provides a compelling insight into the evolution and glories of the largest of the Dodecanese islands in its medieval prime.

You'll begin in Athens, making the most of your brief time in the city at such top attractions as the Monastiraki flea market, the sprawling National Museum and, of course, the can't-miss Parthenon. Next day arrive Rhodes, with time to explore the UNESCO World Heritage-designated medieval Old Town of Rhodes, including the Byzantine fortress and Palace of the Grand Master of the Knights, and the site where the Colossus of Rhodes once stood.

Day three is for hiking a rocky gorge that gives a sublime taste for Rhodes' at its natural best. You’ll wind past olive groves to reach the hilltop Kammiri Monastery before descending though pine forest to the fishing village of Lindos, with its hilltop acropolis. Next day, climb up to the medieval castle of Monolithos, built by the Knights of Saint John, then stop in at the vineyards of Embonas for lunch, followed by the hilltop monastery of Prophete Elias. On day five, it’s time to say farewell as you head back to Athens and home. Learn more

Itinerary #3: Family Adventure in Athens and the Cyclades

Have fun with all the family in Athens and the beautiful island of Naxos on this five-day family adventure as you experience the best of Classical Greece, explore Naxos’ Venetian castle district, and laze and play on gorgeous beaches.

Begin your trip in Athens, making the most of your first day in the city at such top attractions as the Monastiraki flea market, the sprawling National Museum and shopping along pedestrian Aiolou Street. Next day, an interactive immersion in Classical Greek mythology begins at the Acropolis with guides specializing in children’s education, while at the National Garden performers recreate the adventures of ancient gods and goddesses. After the curtain goes up, dine mezze-style on Greek favorites in the atmospheric Plaka district.

Kids will love the ferry ride to Naxos on day three. Upon arrival, unwind as you hike to the summit of Mount Zas… explore the market of Chalki… visit the temple of Demeter… or simply wander the hillside streets of the Kastro district. What's a trip to the islands without a day on the beach? Thus, on day four choose your own slice of paradise, such as Agios Georgios, the closest beach to the main town and especially popular with families enjoying the shallow waters. Next day, wave goodbye to Naxos as you board the ferry to Athens. Learn more

Named for one of Zeus’ many offspring, the Ionian Island of Zakynthos is renowned for scenic shipwrecks, ancient stone villages, and beaches where rare loggerhead sea turtles nest. This five-day itinerary samples the best of the isle.

After a day of sightseeing in Athens, head to the Peloponnese port of Kyllini port to hop a ferry to Zakynthos. Upon arrival, you’ll have time to visit the church of Agios Dionysos, and walk the restaurant-lined, waterfront Strata Marina to Solomos Square, with its Post-Byzantine Museum and exquisite architecture.

Day three, enjoy a full-day boat ride to Zakynthos's many secluded coves, including postcard-perfect Navagio (or ‘Shipwreck’) Beach, to sun, snorkel, and swim. Ashore, you can photograph the beach from atop Skinari Cape, then tour a winery before returning to Zakynthos town. Next day explore the island’s hidden corners, including the vista from high in the Vrachionas Mountains and a memorable swim in the bathtub warm turquoise waters of Makris Gialos Beach. Plus, you’ll visit such ancient villages as Exo Hora, Gyri, and Maries, for an immersion in time-honored Ionian rural lifestyle. Next morning, say goodbye as you board the ferry to Athens. Learn more

Famous as the setting for the movie Mamma Mia, the delightful isle of Skopelos is the enchanting highlight of this five-day itinerary that also includes Athens and Thermopylae—the famous battle site between the Spartans and Xerxes’ Persian army.

Spend your first day exploring the sights and flavors of Athens, before driving north to Thermopylae, where Leonidas of Sparta battled the Persian army in 480 BCE. Arriving in the port town of Volos, stroll its charming waterfront, stopping at tavernas to sample mezze small plates washed down by tsipouro, a local brandy. You'll also visit stone villages studding the slopes of Mount Pelion—home of the mythical centaurs.

On day three, set sail for Skopelos in the Sporades. Once known for its wines, today it’s renowned as the filming location for Mamma Mia (2008). Upon arrival, revel in exploring its medieval castle and Byzantine harborfront streets. Then enjoy a full-day guided tour of the island highlights, including sites associated with the movie starring Meryl Streep and Pierce Brosnan. Of course, a highlight will be a hike to the Agios Ioannis chapel, where the movie's wedding scene was filmed. Plus, visit an olive press and Kastani and Agnontas beaches. Next day, wave goodbye to Skopelos as you return to Athens. Learn more

Looking for more inspiration for your Greece trip? Check out these other 5-day Greece itineraries, ranging from active, to cultural, to luxury, or family-friendly trips.

Get a glimpse of the evolution of a thriving medieval island turned...
Greece 5-Day Tours & Itineraries