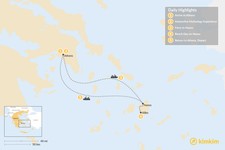 See Athens and the Cycladic island of Naxos with this five-day itinerary. Start by taking your whole family up to the Acropolis to experience the myths of Classical Greece up close, then head down to the island of Naxos to explore its former Venetian castle district and lounge on the many beaches.

What's a trip to the islands without a day on the beach? With smaller crowds than its Cycladic neighbors, Naxos makes it easy to find your own slice of paradise, whether you want privacy or a more lively scene. Terminology tip: If a beach is described as "organized," that generally means it has sunbeds and umbrellas available to rent and plentiful restaurants.

Agios Georgios is the closest to the main town and generally filled with families enjoying the shallow waters. Neighbors Agia Anna and Agios Prokopios also have plenty of amenities on their sweeping sands, with enough shoreline that you'll be able to stake out a spot but sufficient tavernas to keep you fed.

The more isolated beaches of the southwest coast—including Plaka, Mikri Vigla, and cedar-lined Aliko—are some of the best on the island. They're farther out from the main town, and your travel will be rewarded with quieter sands and scenic surroundings.

Day 5: Naxos to Athens and Depart

It's time to wave goodbye to Naxos! After breakfast, you'll be transferred to either Naxos Port or the island's small airport to return to Athens in time for your departure.

Spend two weeks taking your family through the largest of the Greek...
Greece Family Travel

Experience captivating Athens and a lesser-known Cycladic island with...

Family Adventures in Athens and the Cyclades - 6 Days

Get a glimpse of multiple angles of Greece on this six-day family trip....

Experience captivating Athens and highlights of the nearby Peloponnese...
Best of Naxos

Take older kids and teens on this two-week itinerary that will get you...

Older kids and teens can enjoy ten days of activities that will acquaint...

Spend a week getting in touch with Greek culture alongside your...

Take a week getting out into nature in the Peloponnesian peninsula with...

Your school-aged children can learn about Greek culture in a sun-filled...

The distance between Chania and Santorini is 100 miles (162 km)....
Getting Around Greece

Daniel F.
Georgia, United States
"Just not used to not meeting Dimitris for the whole trip - next time need to give me WARNING about the Hotel in Santorini being Down on the cliff - i was pan..." read more
Traveled to Greece solo in October, 2019
Create your custom-made trip to Greece
Get Started