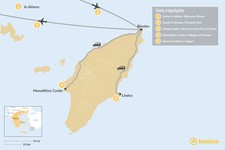 Get a glimpse of the evolution of a thriving medieval island turned modern getaway with this five-day itinerary. The island of Rhodes is home to an expansive old town along with a slew of forts, castles, and other features that will transport you back to antiquity.

Katie S.
Ohio, United States
"Dimitris was an excellent help on my first trip to Greece. He booked us in wonderful, cute, small hotels, planned our transfers to perfection and was extrem..." read more
Traveled to Greece as a group in July, 2022
J
Joanna C.
California, United States
"Eleni did a wonderful job providing great lodging, locations, and experiences during our trip to Greece. We had a family of four with two teenagers and got t..." read more
Traveled to Greece as a family in July, 2022
Create your custom-made trip to Greece
Get Started