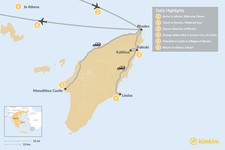 Spend six days wandering through the streets of Rhodes with this island-based itinerary. Though you'll start and leave from Athens, Rhodes is the focus of your trip from its Old Town streets to its sunny beaches and the small villages in between.

Visit the eastern half of the island today, where you can discover some of the first beaches that made Rhodes famous. Kalithea and Faliraki beach are some of the most popular, drawing plenty of visitors to their sunbed-lined shores and warm waters.

Keep the beach day going at one of the coastal restaurants. Or, if you've gotten sufficient time in the salt, spend your evening back in town exploring the Street of the Knights. The labyrinthine Rhodes old town is ideal for getting lost amid the stone streets that have been standing for centuries.

Fall in love with the largest Greek isle with the 6-day version of this...
Greece 6-Day Tours & Itineraries