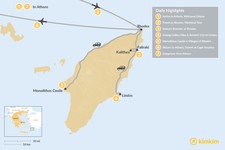 As the fourth-largest Greek island, Rhodes has plenty to explore over the course of a week with this seven-day itinerary. Whether you're wandering the streets of its medieval Old Town or climbing up to see the Monolithos Castle, which has never been conquered since its construction in 1408, this ancient island has something waiting around every corner.

Visit the eastern half of the island today, where you can discover some of the first beaches that made Rhodes famous. Kalithea and Faliraki beach are some of the most popular, drawing plenty of visitors to their sunbed-lined shores and warm waters.

Keep the beach day going at one of the coastal restaurants. Or, if you've gotten sufficient time in the salt, spend your evening back in town exploring the Street of the Knights. The labyrinthine Rhodes old town is ideal for getting lost amid the stone streets that have been standing for centuries.

Return to Athens in the morning. After you've settled back into the city, you'll be transferred down to the Athenian Riviera, full of both history and stunning island views. Your adventure will take you along the coast to visit the Temple of Poseidon, while being provided with historical background on the way. The views overlook the Saronic Gulf, with one of the best sunset views Greece has to offer. Sip a complimentary beverage and take in the sunset while you listen to music and immortalize the moment with a Polaroid-style photo.

You'll be transferred back to your lodging in the evening just in time for a late (Greek-style) dinner. Or, if you're not ready to call it a night, you can request a drop-off at some of the most popular beach bars to dance until the sun comes up.

Dive deep into the Cretan lifestyle in the island's far west region of...