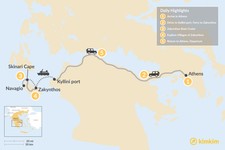 Dip into Zakynthos island on this five-day itinerary. Named for the son of the Arcadian chieftain Dardanus, one of Zeus's many offspring, this Ionian island is home to rare sea turtle nesting grounds, scenic shipwrecks, stone villages, and more for you to explore.

Head to Kyllini port in the morning to hop a ferry to Zakynthos. Also known as Zante to the Italians or "Flower of the East" to the Venetians, the third-largest Ionian island awaits.

The southern coast of the island is lined with resorts and sandy coves and beaches, while on the western side forested cliffs sweep down into the sea. It's also home to the first Greek national marine park due to its regular egg-laying visits from loggerhead sea turtles.

The main Zakynthos town is also home to plenty of on-land attractions. Start at the church of Agios Dionysos, the island's patron saint, then walk the restaurant-lined Strata Marina along the water down to Solomos Square. Stop in the Post-Byzantine Museum or just linger in the square taking in its characteristic island architecture.

See the island from an aquatic perspective with this full-day boat ride. Cruise around to Zakynthos's many secluded coves and clear waters for six to seven hours.

Start off with an overland drive of just under an hour to the Skinari Cape. Once there, hop on a small speedboat to sail past beaches and resorts to the distinctive geographic formations of the Blue Caves, where you'll stop for photos and a swim. Then continue on to drop anchor at Smuggler's Cove, also known as Shipwreck or Navagio beach, where you'll swim and take in the views of this popular spot, home to the wreck of the Panayiotis on its white sands.

Boat back to the Skinari Cape, then board a bus up into the hills for a bird's eye view of the shipwreck. You'll have the options to stop for lunch at a taverna and a winery tour and tasting as you make your way back to town.

In the evening, head to Aghios Markos square, once the meeting place of Greek revolutionaries in 1797. Follow Alexandros Romas street out of the square and through town, taking in the arcades of the main commercial center of the city.

Head inland on today's expedition to the hidden corners of Zakynthos as you travel over the scenic roads to traditional villages. You're in charge, so pick whatever destination points pique your interest.

Capture the views from the island's highest point in the Vrachionas mountains, stop for lunch or a sunset view at clifftop Kampi, or swim in the deep turquoise waters of Makris Gialos beach.

If you're more a village visitor, see the market and monastery of Anafonitria, the old homes in Exo Hora (some of the few to escape the 1953 earthquake), or the highest village on the island at Gyri. The villages of Keri and Maries are known for their rural island life, or you can explore the island's agriculture in northern Volimes or resort scene at Argassi.

The bright blue waters off Zakynthos are home to rare loggerhead sea...
Best of Ionian Islands

Katie S.
Ohio, United States
"Dimitris was an excellent help on my first trip to Greece. He booked us in wonderful, cute, small hotels, planned our transfers to perfection and was extrem..." read more
Traveled to Greece as a group in July, 2022
J
Joanna C.
California, United States
"Eleni did a wonderful job providing great lodging, locations, and experiences during our trip to Greece. We had a family of four with two teenagers and got t..." read more
Traveled to Greece as a family in July, 2022
Create your custom-made trip to Greece
Get Started