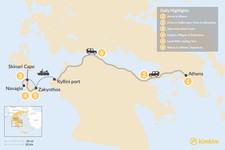 The bright blue waters off Zakynthos are home to rare loggerhead sea turtles and monk seals that have been returning to the island for generations. See what keeps bringing the turtles back and maybe even meet some of them yourself with this six-day itinerary that covers the island's beaches, villages, and vineyards.

Head to Kyllini port in the morning to hop a ferry to Zakynthos. Also known as Zante to the Italians or "Flower of the East" to the Venetians, the third-largest Ionian island awaits.

The southern coast of the island is lined with resorts and sandy coves and beaches, while on the western side forested cliffs sweep down into the sea. It's also home to the first Greek national marine park due to its regular egg-laying visits from loggerhead sea turtles.

The main Zakynthos town is also home to plenty of on-land attractions. Start at the church of Agios Dionysos, the island's patron saint, then walk the restaurant-lined Strata Marina along the water down to Solomos Square. Stop in the Post-Byzantine Museum or just linger in the square taking in its characteristic island architecture.

See the island from an aquatic perspective with this full-day boat ride. Cruise around to Zakynthos's many secluded coves and clear waters for six to seven hours.

Start off with an overland drive of just under an hour to the Skinari Cape. Once there, hop on a small speedboat to sail past beaches and resorts to the distinctive geographic formations of the Blue Caves, where you'll stop for photos and a swim. Then continue on to drop anchor at Smuggler's Cove, also known as Shipwreck or Navagio beach, where you'll swim and take in the views of this popular spot, home to the wreck of the Panayiotis on its white sands.

Boat back to the Skinari Cape, then board a bus up into the hills for a bird's eye view of the shipwreck. You'll have the options to stop for lunch at a taverna and a winery tour and tasting as you make your way back to town.

In the evening, head to Aghios Markos square, once the meeting place of Greek revolutionaries in 1797. Follow Alexandros Romas street out of the square and through town, taking in the arcades of the main commercial center of the city.

Head inland on today's expedition to the hidden corners of Zakynthos as you travel over the scenic roads to traditional villages. You're in charge, so pick whatever destination points pique your interest.

Capture the views from the island's highest point in the Vrachionas mountains, stop for lunch or a sunset view at clifftop Kampi, or swim in the deep turquoise waters of Makris Gialos beach.

If you're more a village visitor, see the market and monastery of Anafonitria, the old homes in Exo Hora (some of the few to escape the 1953 earthquake), or the highest village on the island at Gyri. The villages of Keri and Maries are known for their rural island life, or you can explore the island's agriculture in northern Volimes or resort scene at Argassi.

Head out to Maries village to visit a tranquil local vineyard for today's wine tour. You'll be surrounded by all the trappings of provincial life amid olive, pear, and peach trees. The vineyards were originally planted in 1900 and revitalized in 1987, and the winery has kept growing and expanding its operations since as they work with other vineyards to build up the reputation of Zakynthos wines.

Learn about Ionian varietals such as augoustiatis and robola and the characteristics and history of wine on the island before you try four different wines under the guidance of a dedicated sommelier. The tastings will be accompanied by an assortment of snacks over the course of two hours.

Make your way up to the Bochali village over the main Zakynthos town in the late afternoon or evening to take in the views of the sunset or city lights over the harbor. Visit what remains of the Venetian castle in the pine forest or Byzantine icons in the church of Zoodos Pigi, or linger over a meal in a restaurant with panoramic views of the island.

Fall in love with the largest Greek isle with the 6-day version of this...

The bright blue waters off Zakynthos are home to rare loggerhead sea...
Best of Ionian Islands

Take the coast of the Cyclades from guidebook covers straight to your...
Greece Tours & Itineraries

A
Adam B.
North Carolina, United States
"My wife and I are SO happy that we used Kimkim to help plan a 2 week honeymoon to Athens, Mykonos, Santorini, and Crete, because the trip was absolutely incr..." read more
Traveled to Greece as a couple in May, 2022