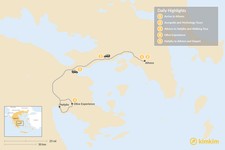 Live like a local in Greece's idyllic Argolic Gulf with this 5-day itinerary. You'll explore Athens for a few days, including a unique guided tour of some of the city's most important ancient sites before you head to seaside Nafplio, home to winding streets and a historic water fortress. Explore this beautiful area of mainland Greece, then get hands-on in an olive grove before you head home.

This morning, you'll wrap up your stay in Athens with breakfast before you head to Nafplio, one of the prettiest seaport towns in the Peloponnese peninsula. Once believed to have been founded by the son of Poseidon, the town was the first capital of the new Greek state after the war of independence in the 1800s.

Wear good walking shoes for today's adventure. You'll start with a stroll through the old town, where you'll pass statues honoring significant figures from Nafplio's history alongside Ottoman fountains, and Venetian architecture along its winding streets topped off by the Bourtzi Castle in the middle of the harbor. Accessible only by boat, the castle was built in the 1470s to defend the city, and it still keeps watch at the entrance to Nafplio Bay.  Then, warm up your leg muscles with a climb up 1,000 steps to see the view from the Palamidi Castle.

You'll meet your guide in the afternoon at the harbor lighthouse to hike underneath the castle's towers. The scenic trek will take you along the Arvanitia path along Acronafplia, which lives up to its translation of "the edge of Nafplio." Go all the way to Karathona beach as you learn about the history of the city and its invasions. Then, continue to the foothills surrounding the castle, with views of the Artemision mountain as your reward for all that walking.

Greece has been enjoying the benefits of olive oil for centuries, and now you can take part in this culinary tradition. You'll begin after breakfast with a drive out to a rural village roughly 5 miles (8 km) outside of Nafplio. Visit the local owners to see how the olive oil-making process works and learn about its steps, as well as meet some of the farm's other inhabitants with a sheep-milking session.

Next, visit the groves themselves, enjoying a picnic experience underneath the shade of the trees and lunch in a family taverna. If you arrive in the harvest season, your experience will even include picking olives in the orchard alongside the workers.

Head back to town in the late afternoon, where you'll have a new appreciation for your dinner's ingredients. Top it off by buying a bottle of wine in a local shop to take home. You're in one of the most notable wine areas of Greece, after all. Look for an Agiortiko or another native grape varietal.

Day 5: Nafplio to Athens and Depart

Time to say goodbye to Greece! You'll be transferred back to Athens International Airport after breakfast.

Get a glimpse of the evolution of a thriving medieval island turned...
Greece 5-Day Tours & Itineraries

Best of the Peloponnese

How Many Days Should You Spend in the Peloponnese?

This less-visited Greek peninsula offers a wealth of historic treasures,...

Located southwest of Athens, the Peloponnese peninsula is home to some...

Top Highlights of the Peloponnese Region

The Peloponnese region is the little-visited underbelly of Greece. It's...