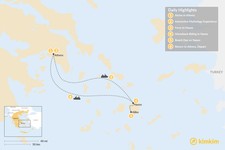 Get a glimpse of multiple angles of Greece on this six-day family trip. You'll begin with a mythology tour of the Acropolis, then sail to the Cyclades to visit Naxos. This island has a rich agricultural and archaeological legacy that you can explore on horseback or simply via wandering through its castle district, plus plenty of stunning beaches that kids and adults will love.

Get a different perspective on the island from atop one of its resident horses. The stable will work with you to create a ride that suits your age and skill level to maximize your experience and trail route.

A trip to the village of Apiranthos is a potential ride highlight. Also known as the "marble village" due to its white architecture and marble stone streets, this mountainside spot offers inland views and a slew of museums and crafts to peruse. Listen for the local dialect among the residents, which has remained distinct from the rest of the islands.

What's a trip to the islands without a day on the beach? With smaller crowds than its Cycladic neighbors, Naxos makes it easy to find your own slice of paradise, whether you want privacy or a more lively scene. Terminology tip: If a beach is described as "organized," that generally means it has sunbeds and umbrellas available to rent and plentiful restaurants.

Agios Georgios is the closest to the main town and generally filled with families enjoying the shallow waters. Neighbors Agia Anna and Agios Prokopios also have plenty of amenities on their sweeping sands, with enough shoreline that you'll be able to stake out a spot but sufficient tavernas to keep you fed.

The more isolated beaches of the southwest coast—including Plaka, Mikri Vigla, and cedar-lined Aliko—are some of the best on the island. They're farther out from the main town, and your travel will be rewarded with quieter sands and scenic surroundings.

Fall in love with the largest Greek isle with the 6-day version of this...
Greece 6-Day Tours & Itineraries

The ancient Minoan civilization on Crete was one of the first to create...
Greece Family Travel

Tiny Mykonos can be crisscrossed by car in about 25 minutes, but that...
Best of the Cycladic Islands

Cody C.
the United Arab Emirates
"This was our first time using KimKim, and we will definitely be using it again. Harris was simply amazing. He went out of his way to accommodate all of our r..." read more
Traveled to Greece as a couple in October, 2021
Plan your trip to Greece
Customize your trip with help from a local travel specialist
Plan Your Trip