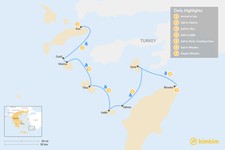 Experience six islands in 7 days with this boat trip around the Dodecanese. You'll sail across the Aegean Sea, stopping to explore, hike, dine, and swim around medieval fortresses, deserted islands, expansive beaches, and seaside tavernas. Wrap it up in the old town of Rhodes, where ancient history is steeped into the architecture and cobblestone streets.

Welcome to Greece! Your Dodecanese diary will begin in Kos, the second-largest island in the chain.

Meet your guide for a briefing before taking the evening to yourself. Wander through Kos's winding streets and see the Venetian and Ottoman-influenced architecture, or put on some walking shoes and head up to Nerantzia Castle. This medieval fortress sits over the city, with an interior well worth exploring and sprawling views out over the Aegean.

Today, you'll enjoy a relaxing breakfast in Kos before boarding a sailboat—your home base for the next six days. Your first nautical stop will be the island of Gyali, where you can hop off the boat for a swim and snorkel. Like Nisiros, Gyali is also part of the Aegean's volcanic arch, which gives the land its unique color and contributes to its still-functioning pumice production.

Have lunch on board as you continue toward Palous port in Nisiros. This petite island holds an explosive interior—it's also home to an active volcano. You'll dock in the early afternoon, just in time for your first hike. The trail will take you through the volcanic craters that dot the island, creating dramatic views to take in.

Conclude with dinner in a seaside taverna and take in the views, off-deck.

Your next stop is Tilos, also known as the "green island"—a place that runs exclusively on wind and solar power. But don't rush your time due to the diminutive size. There are plenty of swimming stops around the shores, and you'll have worked up an appetite to have lunch onboard, amid the Aegean Sea.

In the afternoon, your boat will dock at Livadia port on Tilos. You'll then follow the coast from the port along a trail that captures all the best aspects of the islands. Pass multiple beaches, including a volcanic red sand beach, on your way to Lethra beach. You'll ascend from the shore up to Mikro Chorio ("small village") for a change of scene. This once-populous village is now deserted, home only to abandoned homes, narrow alleys, and a few roving goats. Wander through its overgrown yards and maybe stumble upon the secret bar in this ghost village before returning to Livadia for dinner.

Keep the ghost trend going with a morning trip to the deserted island of Alimia, abandoned since the Second World War. In Hellenistic times, Alimia was the anchorage and observatory for the Rhodian fleet, and a tower was constructed on the island's highest peak to support their efforts, which is still standing today. Part of it was used by the Knights of Saint John to construct a medieval castle during their taking of the island in 1475.

Your journey through the past will begin in the bay where the main town once stood. Hike through the forgotten trails past the tower and castle ruins until you reach the second bay. Cool off in its clear waters and contemplate the history that you just walked through.

You'll get back on board for lunch and sail toward Halki over the afternoon, once named the Island of Peace and Friendship. Its postcard-perfect port is full of colorful buildings that once belonging to rich sailors. This petite island is perfect for private relaxation as one of the smallest and least-developed islands in the Dodecanese, and even better for enjoying a dinner by the sea.

Set sail early towards Symi, the most remote and cosmopolitan island of the Dodecanese. You'll stop at several bays along the way to swim in the emerald green waters, including the bay of St. George Disalonas.

Enjoy lunch onboard before reaching Symi in the early afternoon. You'll walk to Pedi, a calm bay next to the town. Then continue onward to a local taverna, where you'll learn to recreate the Greek classics that you've been enjoying throughout your trip in a personal cooking class. Take a sunset stroll back to the port, complete with picturesque views, just in time for dinner.

After one more breakfast on the boat, you'll sail toward your final port of Rhodes, the largest island in the chain. Take some more dips into the surrounding bays as you sail and eat lunch onboard before reaching Mandraki port. You'll sail in past surrounding medieval walls that were once home to the famed Colossus of Rhodes, imagining the statue towering over your entry.

Continue the imaginations of history as you enter the city's walls on foot to stroll through the medieval town, a UNESCO World Heritage site. Wander through the castle and its surrounding narrow alleyways before settling in for a farewell dinner in the old town.

Time to bid the Dodecanese adieu. Have one last bowl of Greek yogurt at breakfast before your transfer to the airport or ferry for your return trip home.