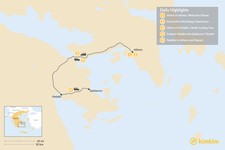 A short but sweet itinerary perfect for your short people. This five-day trip takes you to some of the child-friendly highlights of Athens and neighboring Nafplio, with storytelling at the Acropolis, a seaside bike tour,  a castle built to defend against pirates, and plenty more to see and entertain regardless of your age.

This morning, you'll wrap up your stay in Athens with breakfast before you head to Nafplio, one of the prettiest seaport towns in the Peloponnese peninsula. Once believed to have been founded by the son of Poseidon, the town was the first capital of the new Greek state after the war of independence in the 1800s.

Explore the city under the power of two wheels with a cycling tour. A guide will take you past the highlights of the city and stunning views of the Argolic Gulf. You'll ride for roughly 2.5 hours, including some time to stop for a snack whilst enjoying the views, across terrain easy enough for riders of any age.

Take a stroll through the old town in the evening, where you'll pass statues honoring significant figures from Nafplio's history alongside Ottoman fountains, and Venetian architecture along its winding streets, topped off by the Bourtzi Castle in the middle of the harbor. Accessible only by boat, the castle was built in the 1470s to defend the city from pirates, and it still keeps watch at the entrance to Nafplio Bay. Visit the Vasileos Konstandinou pedestrian street to take you across the old town, ending in Syntagma Square where you can choose between a variety of tavernas for dinner.

Take the morning to relax and explore peaceful Nafplio at your own pace, perhaps lingering over a coffee and Greek yogurt or pastry. If you're feeling active and haven't climbed the Palamidi Castle yet, now is the perfect day to do so.

Day 5: Nafplio to Athens and Depart

Time to say goodbye to Greece! You'll be transferred back to Athens International Airport after breakfast.

Most travelers will find that 7 to 10 days is perfect for a well-paced...

Nine to 12 days is the most popular trip length for Greece travelers...

How to Get from Athens to the Ionian Islands

The distance from Athens to the Ionian Islands is about 217 miles...

J
Joseph S.
Maryland, United States
"The positives - I would definitely recommend using Chris. Very impressed with the overall trip of 2 weeks we booked with Chris at kimkim. The organization ..." read more
Traveled to Greece as a family in January, 2020